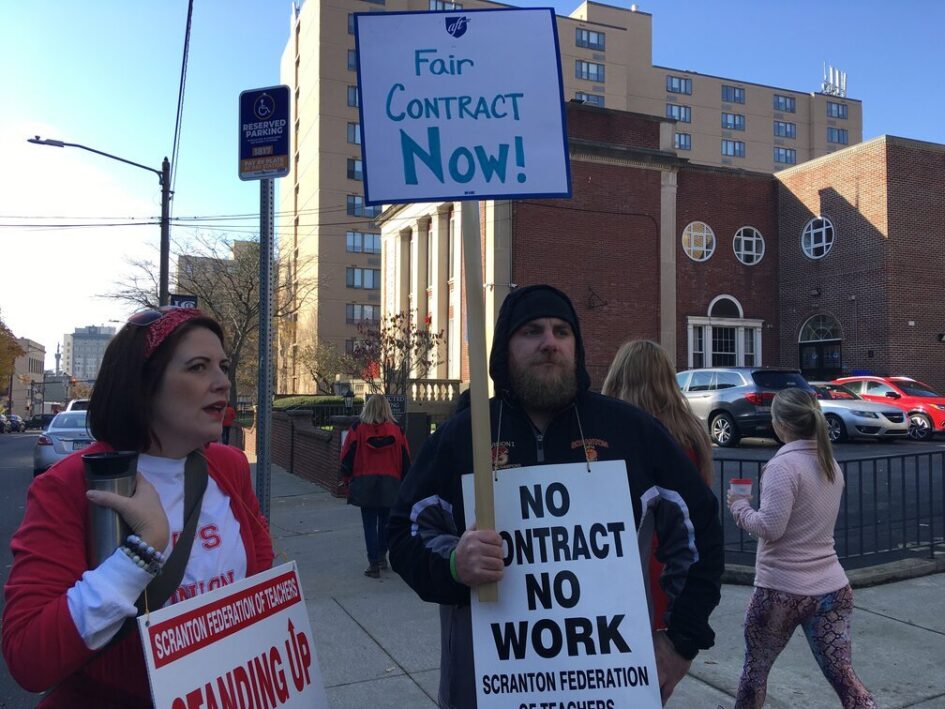 Scranton educators spent more than two weeks on strike beginning Nov. 3, taking a stand after working for four years without a contract. Teachers returned to the classroom Nov. 22 after an agreement between the union’s leadership and the school district, and will decide whether or not to ratify the deal later this week.

Liberation News joined teachers, counselors and other Scranton Federation of Teachers (SFT) members on the picket line the morning of Nov. 22. “I’m joining my colleagues for a fair contract, standing up for what they deserve, what we deserve, because people matter, our kids matter, and our community matters despite what the leadership for the Scranton school district and the leadership of our state have to say,” said Jennifer Telesco, a first grade teacher and SFT member.

The SFT strike comes at a time when the U.S. labor movement seems to have reawakened, with strikes sparking across the country in October and continuing through November. While workers have been deemed “essential” during the many months of the COVID-19 pandemic, they have not been treated with respect by their employers. So, like many across the country, SFT workers now have to fight for their rights, fair wages, and more funding for their school programs.

With wages frozen for five years, the teachers and counselors have sacrificed greatly even before the pandemic exacerbated poor working conditions and workers’ ability to survive and care for their families. Healthcare in particular had been a sticking point in the negotiations between the Scranton educators and the district.

“Why do we attach healthcare to employment?” asked Adam McCormick, English teacher and SFT member. “The school district is using healthcare to break us. We have lost 15% of our staff to other districts. We have parents whose kids are in hospitals. The district thinks they can operate without us, but the first thing you need are educators.”

The school board has offered only an extremely costly health insurance plan that comes with a hefty $4,000 deductible. The board also cruelly voted to cut off health insurance for the striking educators.

“I’m willing to take no paycheck for the fight. That’s how strongly I feel that we need to take a stance for ourselves. As counselors, one of our jobs is to teach students how to advocate for themselves so that’s a very important part of our mission too, that we show that we are advocating for ourselves,” said a counselor who was on the picket line with another counselor and both of their husbands, all of whom work at one of the Scranton high schools.

English teacher and SFT member Breeda Holmes said that the district has also cut programs like chorus and band. Instead, the students now attend a general music class once every six days. “Kids don’t get opportunities if they are passionate about music. Opportunity should not depend on location,” Holmes said.

Though the fight is an exhausting process, Holmes and McCormick hope that it leads to the Scranton community as a whole demanding more for themselves, their children, and their fellow workers in the SFT. “Our entire power comes from our unity,” McCormick added. “We have more support from the community, from the parents, the students, people who live in the community, than before. There is a sense of understanding and they are with us. Unfortunately, the district is not doing a thing to help us. There is no negotiating. We’re willing to negotiate. We all want to be here. We’re committed to it,” another counselor said.

The state government imposed a legal limit on the length of the strike, demanding it end by November 30 so students have 180 days of instruction by the end of June. Even though the school district bosses could rely on the assistance of the government, education workers bravely fought for a fair contract. The labor movement continues to gain momentum as more and more union workers take a stand.