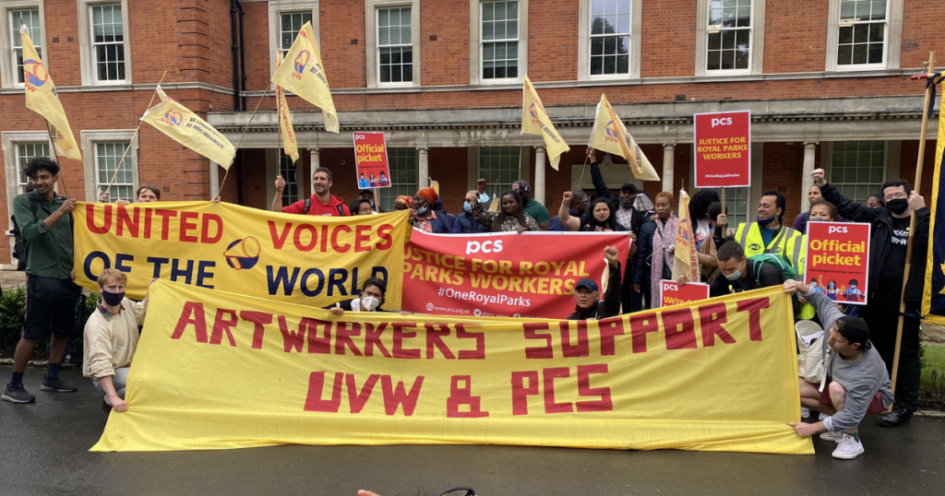 Outsourced cleaning staff at the Royal Parks in London struck today [30th July] and agreed to take a further 14 days of strike action commencing 16th August. The campaign is a joint effort between the two unions PCS (Public and Commercial Services union) and UVW (United Voices of the World). The struggle is over the issue of direct employment and worker’s rights, so this should be seen as another instance of labour militancy that has formed around the industrial practice of outsourcing.

Today’s picket outside The Old Police Building, Hyde Park, a HQ for the Royal Parks’ directly-employed staff and management, was well-attended in spite of the rain. The strikers shared their grievances with one another and the assembled crowd. No sick pay, inconsistent working hours, unclear payslips, and racial discrimination from the public with no support from management.

The pickets are also significant as part of a protest against systemic racism. Workers in the UK who suffer the indignity of outsourced contracts are far more likely to be non-white or migrants. In recognition of this, UVW launched a legal challenge in 2020 against the Royal Parks alleging indirect race discrimination against BAME outsourced cleaners. If successful, this legal challenge would set a precedent that could be used against other employers.

The two unions PCS and UVW have worked together before, in a fight for health and safety measures, full sick pay, and living wages at the Ministry of Justice. UVW is an energetic organisation that knows how to effectively recruit and empower workers, while PCS has the legitimacy and funding that come from being a mass member organisation. PCS is working on the bargaining and covering basic strike pay, UVW continues to ensure lively pickets.

In October 2019, UVW-unionised workers at the Royal Parks won a 30% pay rise. But in retaliation the employer sought to recover the costs through redundancies and increasing workloads. As a long-serving workforce, the cleaners and toilet attendants of the Royal Parks have had enough of being treated so poorly and are now putting their foot down on outsourced contracts. With backing from two unions working together towards a shared goal, the collective confidence of these workers could be felt like static buzzing through today’s picket. As socialists and anti-racists we must do what we can to ensure a successful jump to victory over the employer.

You can support the striking workers by donating to their strike fund.