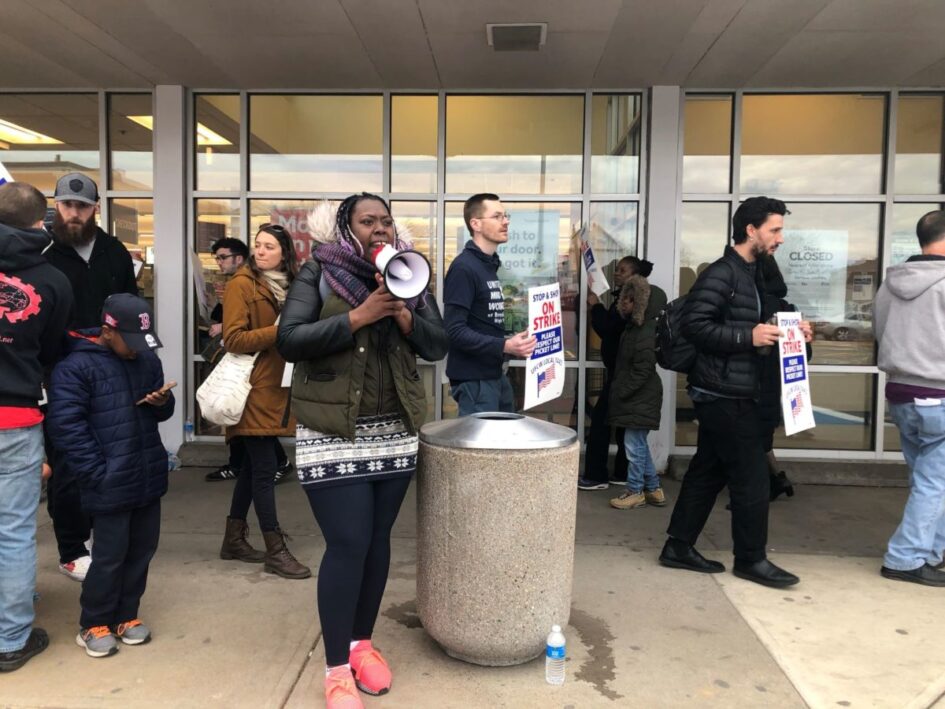 Over 30,000 grocery workers represented by the United Food & Commercial Workers union ratified a four-year contract on March 1 with Stop & Shop. The major win for Massachusetts, Connecticut and Rhode Island Stop & Shop employees comes on the back of a strike in 2019 and growing cultural consciousness that the economy can not run without essential workers.

Workers also won a continuation of their existing healthcare premiums of $19/week for individuals and $39/week for family plans. Stop & Shop also agreed to continue a pension plan for part-time and full-time workers.

These important issues were at stake in the 2019 contract fight when Stop & Shop initially proposed increasing employee health insurance premiums and contributing to 401(k) accounts over the existing pension plan.

Stop & Shop parent company Ahold Delhaize lost approximately $100 million in profit in 2019 after 31,000 workers at 240 stores went on strike for 11 days to fight for continued affordable health insurance and access to pension plans.

In response, Stop & Shop brought in corporate employees and hired scabs, but the workers were not alone. Burt Flickinger, a grocery industry consultant, estimated 90% of customers brought their business elsewhere in solidarity.

Geoff Applegate, the Stop & Shop worker who went viral for standing lone watch against delivery trucks attempting to cross the South Boston picket line, told Liberation News in 2019, “I think we not only showed our company but every company and every union what can be done if you feel like the corporation is taking advantage of the situation.”

The people showed solidarity with workers beyond not crossing the picket line. In the first few days of the strike, 1,000 people donated $54,000 to a GoFundMe for striking workers.

The first year of the coronavirus pandemic saw an 11% increase in grocery sales. By the end of June 2020, UFCW noted that at least 82 of its represented grocery workers had died from the virus, and over 11,500 had been infected.

UFCW and Stop & Shop agreed on a 10% hazard pay starting March of that year, yet Stop & Shop allowed it to expire on July 5.

Fourteen UFCW Locals collectively representing 70,000 workers summarized the situation: “To treat Essential Workers as disposable after what they’ve done to keep our dinner tables full, at a time with such grave uncertainty about our future and when the company continues to rack up large profits is disgraceful.”

After continued struggle, Stop & Shop workers were back paid the 10% hazard pay for hours worked between July 5 and August 22 in 2020.

The pandemic has made it obvious that workers need to take collective actions to fight for their lives in a country that will put them at risk for corporate profits. A recent Gallup poll found that 68% of Americans support labor unions, the highest level of support since 1965.

Stop & Shop wrote of the 2019 contract negotiations, “this would make our company less competitive in the mostly non-union New England food retail marketplace.” That misrepresents Ahold Delhaize’s influence on the grocery market.

Ahold Delhaize was formed in July 2016 when Royal Ahold and Delhaize Group merged. In 2020, it was the 12th largest retailer in the U.S.

This is not a small company struggling in a competitive market — this is a grocery giant leeching the value of workers to give to wealthy shareholders and corporate executives.

But Ahold Delhaize underestimated the power of workers. As Jeff Jones, vice president of UFCW Local 1459, said “They didn’t think we were credible. They didn’t think we had the internal organizing. They didn’t think we’d have the public support.” As Stop & Shop, John Deere, Kellogg’s, and Starbucks workers have recently shown, when workers and their communities fight together, they can take on Goliath and win.

Workers need a wage to live on – A Living Wage