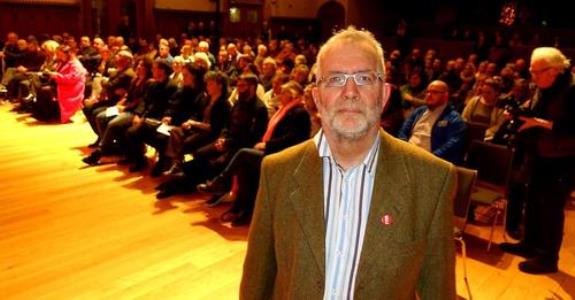 Derry city’s Guildhall, in the north west of Ireland, was packed for a meeting to protest BBC management’s plans to effectively close Radio Foyle. Virtually all 300 chairs laid out were occupied, and there were a couple of dozen standing about at the sides.

The Derry North West Ireland Branch of the National Union of Journalists (NUJ) organised the meeting. A strong delegation of Unison trade union members attended with their banners. Many trade unionists, community activists, political representatives and ordinary members of the public were there. The NUJ’s Assistant General Secretary and President spoke from the platform, with the Father of Chapel (Shop Steward) in Foyle and the Secretary of Derry Trades Council.

The meeting reflected public anger in the area at management proposals. BBC management want to end Radio Foyle’s award-winning Morning Programme. They also want to end hourly bulletins during the day. That would leave Foyle with just one half-hour news bulletin at lunchtime. Up to eight redundancies are threatened.

The NUJ is in talks with the BBC.

The strength of opposition greatly strengthens the union’s position. Back in the noughties a similar attempt was defeated. Back then, too, the union locally organised a campaign of opposition.

The campaign is stronger this time. Representatives of all political parties supported the union’s stance and spoke in favour. They see the proposals of BBC management as cack-handed. Sara Canning, partner of Lyra McKee [on 18 April 2019, journalist Lyra McKee was fatally shot during rioting in the Creggan area of Derry] also spoke powerfully from the floor. She told how journalists at Foyle were greatly supportive after Lyra’s murder.

The cuts to Foyle are part of cuts to BBC local radio across Britain and Northern Ireland. The message from the union locally was that we are not seeking a local deal for Foyle. We are part of the opposition to the cuts across the BBC. Success at Foyle can have a knock-on effect across BBC local radio.

Dimitris Koutsoumbas: “Capitalist growth, by definition, is anti-popular in any management formula”

Management Rights: A Pitfall When Negotiating Your First Contract