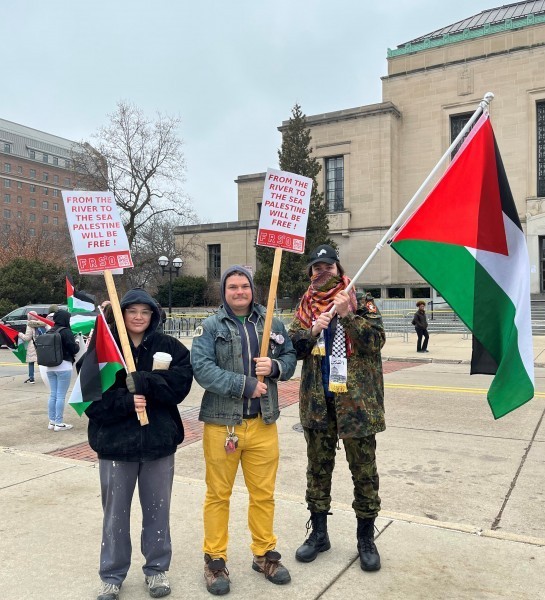 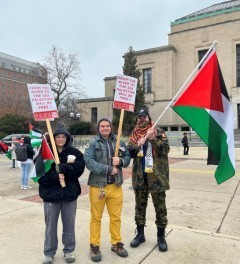 Solidarity with Palestine in Ann Arbor, MI.
(Fight Back! News/staff)

Dearborn, MI – The Palestinian Youth Movement-Detroit and Students Allied for Freedom and Equality, with support from Freedom Road Socialist Organization members, kicked off the week of solidarity work on January 12 supporting a demonstration by Students Allied for Freedom and Equality (SAFE). When U.S. Vice President Kamala Harris visited the University of Michigan for a speaking event on the environment, SAFE took the opportunity to let passersby on campus know that VP Harris is a stalwart supporter of genocide in Palestine.

Harris, a beneficiary of the hundreds of millions in AIPAC (American Israel Public Affairs Committee) campaign contributions and lobbying spending, has been instrumental in maintaining the over $4 billion annual funding of the Zionist occupation of Palestine.

Noor Omar, an organizer with SAFE, led the rally, march and chants of the demonstration. Regarding the premise of Harris’ speech, Omar pointed out, “The Biden/Harris administration has approved more fossil fuel extraction permits on public land than the Trump administration. On what basis can she come here to lecture us on the importance of saving the planet?”

Uniting the struggle for the life of our planet and the lives of Palestinian people, she shouted the slogans: “Kamala Harris, don’t you know, greenwashing has got to go,” “There is only one solution, intifada, revolution!” and “From the river to the sea, Palestine will be free!”

Nearly 100 joined the demonstration, braving the Michigan winter with Palestinian flags, which were recently outlawed in occupied Palestine by the Zionist entity, flying high, slogans reaching the ears of thousands of students and workers, marching from the rally point to the building Harris was speaking.

The next day, January 13, a poetry event and fundraiser was hosted by Bridge Community Cafe in Ypsilanti, Michigan. Several organizations, including Palestinian Youth Movement (PYM) and SAFE, donated proceeds from stickers, shirts, handmade jewelry, and other merchandise to directly support select families living in Gaza. This is the first of a series of fundraisers for Palestinian families held by this progressive cafe and community space.

On January 16, the Detroit Martin Luther King Day Committee carried out its 20th annual MLK Day march and rally. Dozens of groups, including the Moratorium Now! Coalition, PYM, FRSO, and many others numbering in the hundreds again rallied and marched in the freezing cold.

One event volunteer said, “The MLK Day Committee sets an excellent example of coalition building, for decades uniting groups from many different struggles around this event, making it clear that these social ills all share the same root and that we must unite to overcome them.”

PYM member Rshad Karim spoke to the audience, acknowledging the colonized land upon which this event was held and going on to say: “For over 100 years, Palestinians have recognized the struggle for their right to self-determination against the colonization and occupation of their land and people. In those years, we’ve known the undeniable link in the global struggle for freedom. We strive to follow the teachings of revolutionary thinkers like Dr. King, Malcom X, James Baldwin, Huey Newton, Angela Davis, Kwame Ture, Fred Hampton and more. We learn from each other, just as political prisoners in the U.S. and Palestine strive to work with each other from behind bars.”

On January 19, at the Arab American National Museum in Dearborn, PYM held a screening of Resistance, Why? followed by an in-depth discussion. The documentary was produced in 1971 by Christian Ghazi but considered lost to the ages when his home in Lebanon was raided in 1988 during the civil war and the films burned. In 2021, a copy was found and restored by Beirut group Nadi Lekol Nas.

The documentary includes footage and commentary from many historical figures such as Sadiq Jalal Al-Azm, Ghassan Kanafani, and Nabil Shaath, describing the history of the struggle for the liberation of Palestine. About 75 people of all ages and backgrounds were present for the discussion, with many elders providing their own accounts and analysis of the events covered by the documentary. The discussion ultimately asked the audience what lessons can be learned from those who carried on the struggle before us.

Palestinian Youth Movement organizer Zaya Maqdessi said, “It’s so important that we know what we stand for and where we’ve been. It is not enough to passively observe from the outside and learn about the struggle of Palestinian people, we must have revolutionary education much like Frantz Fanon conceived of, to see ourselves as part of the struggle we are seeking to learn about and advance.” PYM continues the struggle. In February, they are cosponsoring an event with SAFE titled “Honoring our Martyrs” with location and date soon to come.

From the frontlines of struggle: The PSL in action across the country

Prop 3: A Victory for Abortion Rights in Michigan