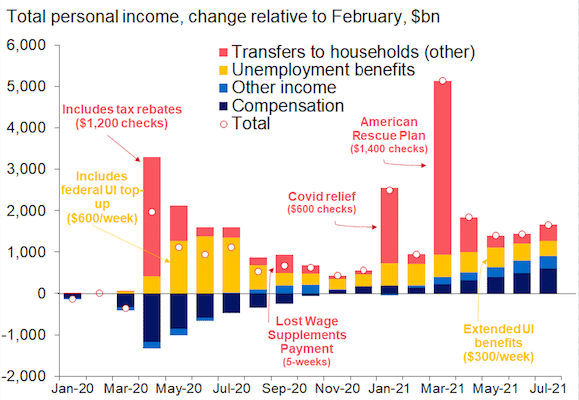 Many are understandably alarmed about what the September 4th termination of several special federal pandemic unemployment insurance programs will mean for millions of workers. Twenty-five states ended their programs months earlier, with government and business leaders claiming that their termination would spur employment and economic activity. However, several studies have disproved their claims.

One study, based on the experience of 19 of these states, found that for every 8 workers that lost benefits, only one found a new job. Consumer spending in those states fell by $2 billion, with every lost $1 of benefits leading to a fall in spending of 52 cents. It is hard to see how anything good can come from the federal government’s willingness to allow these programs to expire nationwide.

The Biden administration appears to believe that adoption of its physical infrastructure bill and $3.5 trillion spending plan will ensure that those left without benefits will find new jobs. But chances for Congressional approval are growing dim. Even more importantly, and largely overlooked in the debate over whether the time is right to replace the pandemic unemployment insurance programs with new spending measures, is that an increasing share of the jobs created by economic growth are low-wage, and thus inadequate to ensure workers and their families an acceptable standard of living.

For example, according to another study, the share of low wage jobs has been steadily growing since 1979. More specifically, the share of workers (18-64 years of age) with a low wage job rose from 39.1 percent in 1979 to 45.2 percent in 2017. For workers 18 to 34 without a college degree the share soared from 46.9 percent to 61.6 percent over the same tyears. Thus, a meaningful improvement in worker well-being will require far more than a return to “normal” labor market conditions. It will require building a movement able to directly challenge and transformation the way the U.S. economy operates.

The importance of government programs

The figure below provides some sense of how important government programs have been to working people. Government support was truly a lifeline for working people, delivering a significant boost to total monthly personal income (relative to the February 2020 start of the pandemic-triggered recession), especially during the first months. Even now, despite the fact that the recession has officially been declared over, it still accounts for approximately half the increase in total monthly income. The FPUC was authorized by the March 2020 CARES Act and renewed by subsequent legislation and a presidential order. It originally provided $600 per week in extra unemployment benefits to unemployed workers in states that opted in to the program. In August 2020, the extra payment was lowered to $300.

Tragically, the federal government allowed all three programs to expire on September 4th. Months earlier, in June 2021, 25 states actually ended these programs for their unemployed workers, eliminating benefits for over 2 million. Several studies, as we see next, have documented the devastating cost of that decision.

The cost of state program termination

Beginning in April 2021, a number of business analysts and politicians began to aggressively argue that federally provided unemployment benefit programs were no longer needed. In fact, according to them, the programs were actually keeping workers from pursuing available jobs, thereby holding back the country’s economic recovery. Using these arguments as cover, in June, 25 states ended their participation in one or more of these programs.

For example, Henry McMaster, the governor of South Carolina, announced his decision to end his state’s participation in the federal programs, saying: “This labor shortage is being created in large part by the supplemental unemployment payments that the federal government provides claimants on top of their state unemployment benefits.”

Similarly, Tate Reeves, the governor of Mississippi, stated in a May 2021 tweet:

It has become clear to me that we cannot have a full economic recovery until we get the thousands of available jobs in our state filled. . . . Therefore, I have informed the Department of Employment Security to direct the Biden Administration that Mississippi will be opting out of the additional federal unemployment benefits as early as federal law allows—June 12, 2021.

Economist Peter Ganong, who co-authored a paper that found the disincentive effect of benefits was small, told the [Wall Street] Journal: “If the question is, ‘Is UI [unemployment insurance] the key thing that’s holding back the labor market recovery?’ The answer is no, definitely not, based on the available data.”

That aligns with other early research on the impact of benefits ending. CNBC reports that analyses from payroll firms UKG and Homebase both found that employment didn’t go up in the states cutting off the benefits; in fact, that Homebase analysis found that employment declined in the states opting out of federal benefits, while it went up in states that chose to retain benefits. In June, Indeed’s Hiring Lab found that job searches in states ending benefits were below April’s baseline.

In July, Arindrajit Dube, an economics professor at University of Massachusetts Amherst, found that ending benefits didn’t make workers rush back. “Even as there was a clear reduction in the number of people who were receiving unemployment benefits–and a clear increase in the number of people who said that they were having difficulty paying their bills–that didn’t seem to translate, at least in the short run, into an uptick in overall employment rates,” Dube told Insider at the time.

Dube, along with five other researchers, examined “the effect of withdrawing pandemic UI on the financial and employment trajectories of unemployed workers in [19] states that withdrew benefits, compared to workers with the same unemployment duration in states that retained these benefits.”

They found, as noted above, that for every 8 workers who lost their benefits, only 1 found a new job. And for every $1 of reduced benefits, spending fell by 52 cents—only 7 cents of new income was generated for each dollar of lost benefits. “Extrapolating to all UI recipients in the early withdrawal states, we estimate these states eliminated $4 billion in unemployment benefits paid by federal transfers as of August 6 [2021]. Spending fell by $2 billion and earnings rose by $270 million. These states therefore saw a much larger drop in federal transfers than gains from job creation.”

An additional 8 million workers have now lost benefits because of the federal termination of these special unemployment insurance programs. It is hard to be optimistic about what awaits them, given the experience of the early termination states. And equally important, even if the “optimists” are proven right, and those workers are able to find employment, there is still reason for concern about the likely quality of those jobs given long-term employment trends.

The lack of decent jobs

Howell and Kallenberg find both inadequate. Instead, they define low wage jobs as those that pay less than two-thirds of the mean hourly wage for full-time prime-age workers (35-59). Their definition sets the dividing line between low wage and what they call “decent” wage jobs at $17.50 in 2017. As they explain: The authors then divide their low wage and decent wage categories into upper and lower tiers. The lower tier of the low wage category includes jobs that pay less than two-thirds of the median wage for full-time workers, which equaled $13.33 in 2017. As the authors report:

Based on evidence from basic needs budgets, this is a wage that, even on a full-time basis, would make it extremely difficult to support a minimally adequate standard of living for even a single adult anywhere in the country. This wage threshold ($13.33) is just above the wage cutoff for food stamps ($12.40) and Medicaid ($12.80) for a full- time worker (thirty-five hours per week, fifty weeks per year) with a child; full-year work at thirty hours per week would make a family of two eligible for the food stamps with a wage as high as $14.46 and as high as $14.94 for Medicaid. For this reason, we refer to this as the poverty-wage threshold.

The lower tier of the decent wage category includes jobs that pay less than 50 percent more than the decent-job threshold, which equaled $26.50 in 2017.  The figure below shows the overall job distribution in 2017. This long-term decline in job quality will not reverse on its own. And, not surprisingly, corporate leaders remain largely opposed to policies that might threaten the status quo.

So, do we need a better unemployment insurance system? For sure. Do we need a better funded and more climate resilient social and physical infrastructure? Definitely. But we also need a dramatically different economy, one that, in sharp contrast to our current system, is grounded in greater worker control over both the organization and aims of production. Lots of work ahead.