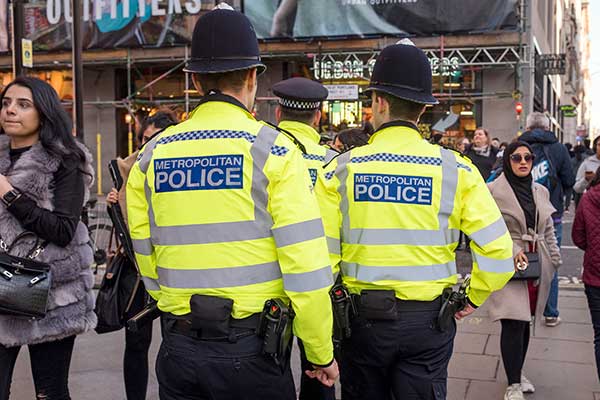 Some 38 percent of the Met Police’s use of force targeted black people—who make up just 13 percent of London’s population. (Pic: Gerald Lau on Flickr)

Black people were more likely to be stopped by cops, threatened or subject to police violence and falsely accused of rule-breaking and wrong-doing during the pandemic.

That’s the conclusion of a new report from the Institute of Race Relations. It quotes one of those interviewed saying that it felt like the police had been handed a “golden ticket” to harass black people.

The report argues that lockdown conditions, new police powers, and histories of institutionally racist policing have combined to pose a threat to already over-policed groups.

The report’s lead author Dr Scarlet Harris says the “Covid-19 pandemic ushered in a period of extraordinary police powers”. And this “arrived in a broader context of racist over-policing and police violence”.

“This report draws on extensive conversations with people from racially minoritised groups and communities living across England over the course of the pandemic,” she said.

“The findings dismantle the myth that the police contribute to public safety. Instead, they demonstrate how policing such a ‘crisis’ has reproduced profound harms for those from racially minoritised groups and communities.”

There was a drop in crime rates as the first lockdown came into effect. Yet stop and search rates more than doubled in May 2020 compared to the previous year.

Between April and June 2020, there was also a 12.5 percent increase in recorded police “use of force” across England and Wales with black people disproportionately subject to it. Over that same time period, 38 percent of the Met Police’s use of force was targetted at black people, who make up just 13 percent of London’s population.

The new powers given to the police during the pandemic, and applied in a racist way, have combined with existing racist mechanisms to target particular groups.

Khalifa, who was interviewed for the report, said the racism of particular police officers was “like a rage which comes out in them when they see black people”. And she recognised this “rage” as having deep roots.

She said, “Don’t forget, this isn’t recently, this is a long history you know. I have a godfather, who’s an old community activist and we remember in the riots in the 1980s. And he was beaten so badly that because of his specific injuries he wears glasses till this day.

“So this isn’t just now, and that doesn’t change the issue that the police got carried away in Covid. But we’ve already got a long history of racial abuse from the police in our black community anyway.”

Kieran, another interviewee, said, “A leopard is not going to change its spots because there’s a disease outside.”

Fixed penalty notices issued for breaking Covid-19 regulations are one clear example of what happened.

The report also notes that class matters. People from more deprived areas are far more likely to be stopped and fined.

Remi Joseph-Salisbury, another of the report’s authors, said, “The evidence in this report really urges us to question the state’s reliance on the police to solve social and public health problems.

“Despite being central to the government’s handling of the pandemic, policing too often threatens rather than protects public safety, particularly for people of colour.”

To read, A threat to public safety—policing, racism and the Covid-19 pandemic, go to bit.ly/IRR0921

Jet Zero: a one way ticket to climate hell