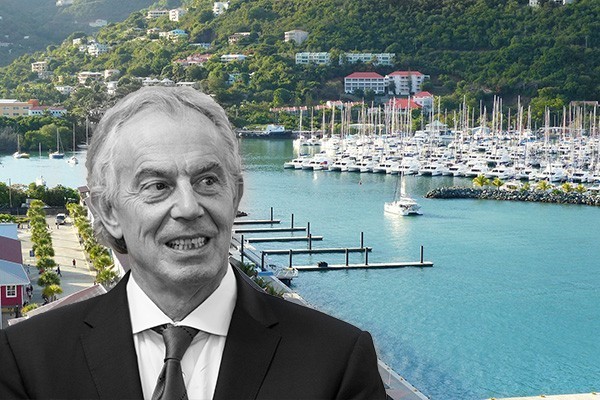 Tony Blair avoided £300,000 in stamp duty with the help of an offshore company based in the British Virgin Islands

Billionaires and politicians who claim there’s not enough money for higher pay and public services have been hoarding trillions away in tax havens.

The Pandora Papers are a leaked cache of 11.9 million files from firms that specialise in creating offshore companies. They reveal the names of a portion of the ruling class who avoid vast sums in tax.

The International Consortium of Investigative Journalists identified 956 companies specialising in offshore tax havens with ties to 336 “high-level politicians and public officials, including country leaders, cabinet ministers, ambassadors and others.”

The investigation and media coverage which is being released throughout the week focused on Eastern European and Middle Eastern political leaders and bosses. Not one US politician is named.

But corruption and tax avoidance isn’t a distant issue.

Former British prime minister Tony Blair avoided over £300,000 in stamp duty after buying a London office through an offshore company.

The £6.5 million offices were bought by acquiring a British Virgin Islands company controlled by the family of Bahrain’s minister for industry, commerce and tourism.

Her identity as the buyer of properties in London was hidden because they were bought through anonymous companies based in the British Virgin Islands.

The purchases included a £15 ­million apartment in Mayfair and a new home for the Greens’ daughter near Buckingham Palace—bought for £10.6 million.

The reaction from the top has been either outright denial or weak promises to investigate and learn from the leak. Chancellor, Rishi Sunak, who married into a billionaire family, said Britain will “look through those to see if there’s anything we can learn”.

Boris Johnson claims that the Tory party vets all donations. But what of the millions of pounds donated by Mohamed Amersi, Lubov Chernukhin and Viktor Fedotov (see below)?

Johnson feigns outrage at tax dodgers such as Jeff Bezos, the founder of Amazon which uses Luxemburg as a tax haven. But his alleged outrage never results in action.

In 2012 when Google’s tax arrangements came to light, boss Eric Schmidt was unashamed. He said the scheme was something to be “very proud of”.

“It’s called capitalism,” he said. “We are proudly capitalistic. I’m not confused about this.”

Schmidt is right. Although the present and upcoming leaks will be shocking, this is how capitalism works and what it allows.

Capitalism is a race to accumulate. This system applauds tax avoidance, corruption and dodgy deals.

It is not a distortion of an otherwise rule-bound and transparent system, it is inevitable in a regime of competition and profit.

The thieves exposed this week—and their counterparts in every country—should have their wealth taken away from them.

But really tackling the rip-offs revealed in the Pandora papers point towards overthrowing the system that facilitates them.

The US’s very own haven

The US state of South Dakota matches Switzerland, Panama and Luxemburg as a tax haven for the super wealthy.

Seeking to shelter hoards of wealth, layers of the ruling class have funnelled £273 billion into the state.

South Dakota has some incredibly powerful legal protections from taxes, creditors and investigations.

These make it perfect for the wealthy to hide their assets there.

The growing trust industry in South Dakota holds approximately £273 billion in assets, up from £55 billion in 2011. This is due to the state government’s agenda of attracting money by protecting assets from governments and taxes.

Analysis of the data identifies 28 trusts in the US tied to individuals or companies who have been accused of financial misconduct.

When he became US president, Joe Biden said, he would “lead efforts internationally to bring transparency to the global financial system.” He hasn’t even done that at home.

Mohamed Amersi, a Tory party donor who funded Boris Johnson’s leadership campaign, was involved in a £161 million payment to an offshore company in 2010.

The company was controlled by Gulnara Karimova, the daughter of Uzbekistan’s former president. The payment has been described as a bribe.

Former banker, Lubov Chernukhin has given the Tories £2.1 million since 2012.

The Pandora Papers reveal her extraordinary reliance on tax havens.

Chernukhin and her Oligarch husband are accused of instructing lawyers over a tax authority dispute in France, Switzerland and the British Virgin Islands.

Oil investor Viktor Fedotov secretly co-owned a company that was once accused of participating in an enormous corruption scheme.

With the money he made, Fedotov gave huge donations to the Conservative party.

He claims the leak is “based upon flawed stereotypes” and that he “never had any interest in British politics”.

The King of Jordan, Abdullah al-Hussein has accumulated property worth £73 million through offshore companies.

The secret property includes 15 homes in places such as Miami in the US, and London and Ascot in Britain.

Protesters in Jordan have previously been arrested for asking how much land al‑Hussein owns.

Social disaster from hurricane is a product of capitalist greed

As Kabul is retaken, papers look back in Erasure