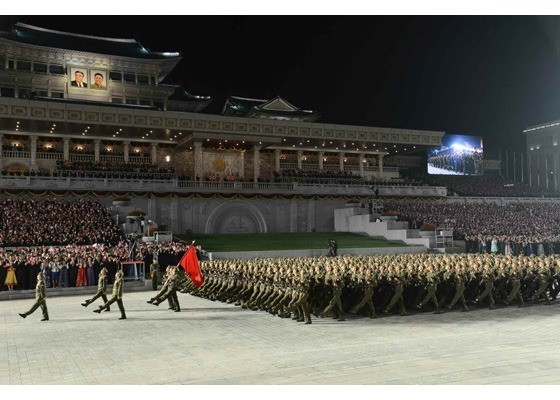 Sept. 9: The parade of paramilitary and public security forces for celebrating the 73rd founding anniversary of the Democratic People’s Republic of Korea was held in splendor at Kim Il Sung Square.

There was a special entrance ceremony of the combined militant band. Parachutists showed landing skill, covering the nocturnal sky in September with national flags. A column of escort planes flew past the sky above the square and fighters in the form of a fan shot off crackers, revving up the festive mood. The Ensemble of the State Affairs Commission and the Central Military Band of the Ministry of National Defence for playing music for parade took their seats at the square for rendition.

Parade columns of paramilitary and public security forces entered the square throwing out their might all around, to the tune of entrance music. At 00:00 on Thursday, the respected Comrade Kim Jong Un, general secretary of the Workers’ Party of Korea and president of the State Affairs of the DPRK, came to the platform of the square. The moment, thunderous cheers of “hurrah!” and loud chanting of “Kim Jong Un” and “devoted defence” resounded through and fireworks shot off, presenting fantastic sea of fireworks.

Kim Jong Un extended warm greetings to all the people of the country celebrating the founding anniversary of the dignified country, waving back to the enthusiastically cheering participants in the parade and in the celebrations. Kim Jong Un and cadres of the Party, government and military were presented with fragrant bouquets by members of the Children’s Union. Taking the platform were Choe Ryong Hae, Jo Yong Won, Kim Tok Hun and Pak Jong Chon. Taking the platform also were cadres of the Party and the government, leading officials of the Cabinet, commissions, ministries and national institutions, labor innovators and persons of merits who made distinguished contributions to the development of the DPRK. Also taking the platform were leading officials of the armed forces organs. Present at the platform on invitation were Kim Yong Nam, Pak Pong Ju, Kim Ki Nam, Choe Thae Bok, Kim Kyong Ok and Kim Jong Im who worked for the Party and the government for a long time.

The reviewing stands were taken by the participants in the celebrations. There was a solemn ceremony of raising a national flag. All the citizens expressed noble respects for the national flag. There was a 21-gun salute amid the playing of the song “The Glorious Motherland”.

Ri Il Hwan, member of the Political Bureau and secretary of the Central Committee of the WPK, made a speech. Then there was an inspection for the preparations for the parade. Commander of the Worker-Peasant Red Guards Kang Sun Nam reported to Jo Yong Won, member of the Presidium of the Political Bureau and secretary for Organizational Affairs of the WPK Central Committee, that units of parade have lined up to get their preparations checked. Jo Yong Won inspected the units of parade. He courteously reported to the General Secretary of the WPK that paramilitary and public security forces are ready to start the parade for celebrating the 73rd founding anniversary of the DPRK.

The solemn parade of paramilitary and public security forces began. Entering the square first led by the lead car of the commander of the Worker-Peasant Red Guards was the column of the Pyongyang City Division of Party members. They are the creators of feats and fighters who devotedly carried out the Party’s policies to win a victory in the campaign for protecting the people as fitting the detached corps dispatched by the Party Central Committee to the sites for recovery from disaster last year.

Following them were the column of the Worker-Peasant Red Guards of Pyongyang City, militia force defending the capital city, led by Chief Secretary of the City Party Committee of the Kim Yong Hwan and the columns of the Worker-Peasant Red Guards in North Phyongan Province and South Phyongan Province, standing guard over the border and the gateway to the capital as an impregnable fortress, each led by Chief Secretaries of the Provincial Party Committees Mun Kyong Dok and An Kum Chol.

Entering the square following it was the columns of the Ryongsong Machine Complex, the Sunchon Area Youth Coal Mining Complex and the Pyongyang Kim Jong Suk Textile Mill. The columns of emergency epidemic prevention and the Ministry of Public Health were full of patriotic enthusiasm to display the advantages of the socialist system all over the world, while firmly protecting the security of the country and its people from the worldwide pandemic. There were also the column of the State Academy of Sciences, and the column of men of culture and art and sportspersons made up of those artistes, moviemen and sportspersons who contributed to exalting the honor of the country and opening up the efflorescence of socialist culture.

Then there were the columns of Kim Il Sung University, Kim Chaek University of Technology and the Young Red Guards. Following the paramilitary force columns, ranks of public security forces marched past the platform.

Kim Jong Un sent encouraging salute to the parading columns marching past in fine array, displaying the invincibility as the dependable political guard force of our Party and the elite force holding a share of the revolutionary armed forces.

The first column was the cavalry task force column of the Public Security Forces.It was followed by a military dog search column. The mechanized columns of the Worker-Peasant Red guards entered the square, demonstrating the vitality of our Party’s military line for self-defence. Following the column of the motorcycles, those in charge of the farm mechanization who were operational in the socialist cooperative fields rolled past the square driving tractors hauling artillery pieces to pound the aggressors and their vassal forces with annihilating firepower in case of emergency. The mechanized columns roared past the square, reminding that our country has turned into an impregnable fortress with a powerful militia capable of carrying out whatever operations and battles independently together with the invincible regular army.

After the evening gala and the display of fireworks, stormy cheers of “hurrah!” for the General Secretary again rocked the heaven and the earth. Kim Jong Un warmly acknowledged the enthusiastically cheering crowds for long. All the participants presented the greatest glory and the deepest gratitude to Kim Jong Un, a peerless hero who is fully demonstrating the new era of overall prosperity of the country and the era of our state-first principle with his ardent love and self-sacrificing dedication to the country and the people.