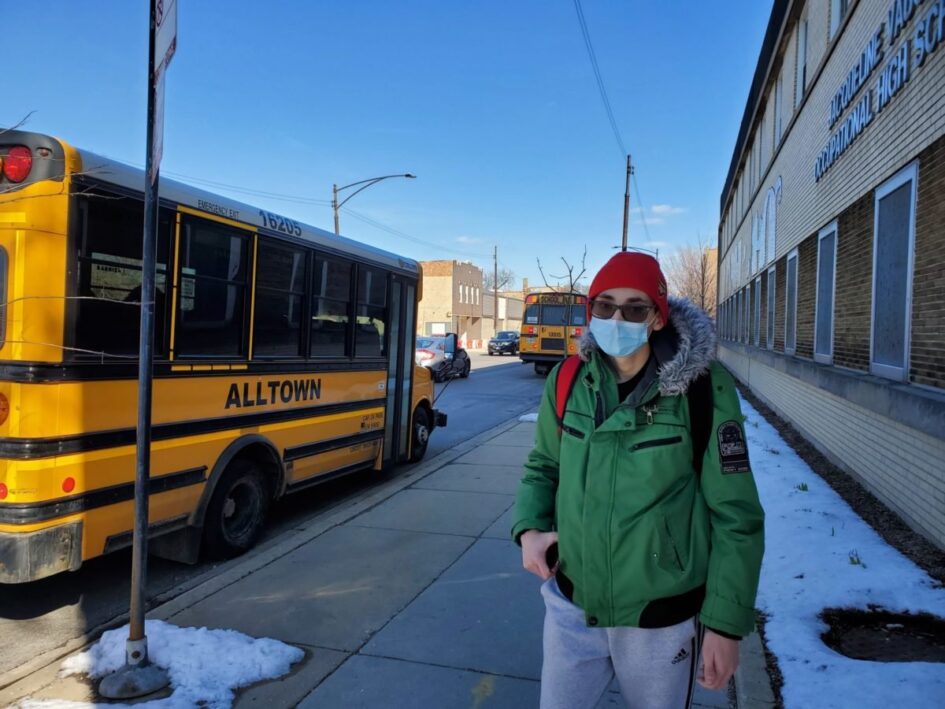 Parents spoke out at a press conference March 8 against Chicago Public Schools’ sudden announcement that it was lifting its mask mandate. The district announced March 7 that masks would become optional in schools starting March 14. Many of the parents speaking at the press conference, organized by Activate Chicago Teachers, said they were blindsided by the decision, which they felt was politically and racially motivated.

“Once again it’s dollars and cents over people. The pandemic does not go away just because you want it to,” said Bridgett White, a parent of two CPS students and a member of Parents 4 Teachers. “Once again Black and Brown communities don’t matter. It’s the affluent and the wealthy that are listened to every single time.”

CPS cited declining infection rates and increasing vaccination rates in its decision to go mask-optional. But these metrics are not evenly distributed across the racially segregated city. WBEZ reported that fewer than half of students are fully vaccinated at almost 75% of CPS schools, and 50 schools have vaccination rates of 10% or lower. Most of these schools are in the less affluent Black and Brown communities on the South and West sides.

“It is clear that the parents that [Mayor] Lori Lightfoot and [CPS CEO] Pedro Martinez are catering to do not look like me or a majority of CPS parents and students,” said Ana Santoyo, a CPS parent and member of PSL Chicago. “They are not listening to the communities that have been disproportionally affected by COVID-19, the parents and students and teachers that have experienced trauma from a pandemic that has killed Black and Brown people at rates two to three times more than white people.”

According to CPS, white students make up just 10.8% of the student body, yet CPS appears to be listening to the parents of students in the affluent Mt. Greenwood neighborhood who recently filed a lawsuit calling for the end of the mask mandate. According to the Chicago Tribune, the lawsuit was filed in downstate Sangamon County by attorney Tom DeVore, who is seeking the Republican nomination for Illinois Attorney General.

The unilateral decision to go mask-optional is also a violation of the Memorandum of Agreement signed in January between CPS and the Chicago Teachers Union, according to a union press release. That agreement, which ended a five-day walkout, calls for the mask mandate to continue through the end of the school year. The union has announced that it is filing an unfair labor practice charge against the district in response.

Brenna O’Brien, a CPS parent and co-organizer of Activate Chicago Parents, said she was angered by CPS’s lack of collaboration with the union and parents. “How can we trust that they’re going to keep our kids safe if they don’t even work with us or the union?” she asked.

Many parents were very concerned about safety. Kalaveeta Mitchell, who has two children at CPS schools said she has six medical conditions that put her at high risk for serious illness with COVID-19. “One of my children attends a [non-CPS] mask-optional school — he was placed there — and last week he bought home COVID. I am scared to death,” she said. Mitchell said her son has been isolating at home for five days, but now her daughter is starting to have symptoms. “If they lift these masks, many of us are going to die. That’s the reality of it,” she said.

People are dying, especially on Chicago’s South and West sides. Chinella Miller, a parent of seven, said that one of her daughter’s friend’s grandmother died after her grandchild bought COVID back to the house. She questioned why the mayor and CPS were not listening to parents like her. “It’s clear to me that the opinions they wanted were not the opinions of the Black and Brown communities.” she said.

Dr. Howard Ehrman of the Peoples Response Network and a CPS grandparent, described CPS’s response to COVID as “racial and ethnic cleansing,” noting a long-standing city government policy to drive poor Chicagoans out of the city by destroying public schools and public housing.

The press conference ended with calls for unity across the city and further actions against the lifting of the mask mandate.

Note: The writer is a CPS parent and member of Parent 4 Teachers. She also spoke at the press conference.