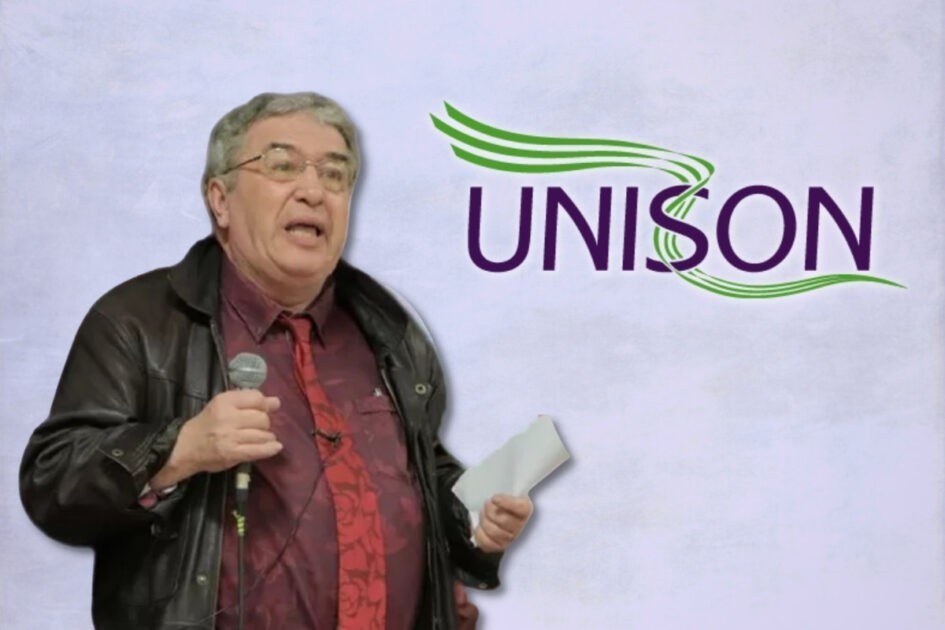 As part of the fight to clear his name in an ongoing battle against victimisation, earlier this week, on Monday 7 March, Unison president Paul Holmes submitted an application for interim relief to an employment judge.

For those who may not be familiar, interim relief is a legal pathway that allows a worker claiming victimisation to be reinstated in their job. It forms part of the case against unfair dismissal.

This measure would have temporarily reinstated Paul’s position as an employee at Kirklees Council until the main tribunal had rendered judgement upon his case.

In what can only be called a travesty, however, the judge ruled against this application. His reasons for doing so were twofold.

Firstly, he said that the evidence submitted by Paul’s solicitors was contested by the council’s legal representation.

And secondly, that the council official whose name appears on the dismissal letter stated in writing that he “supported the trade union movement”, and therefore could be believed when he said did not act to victimise a prominent member of it.

This was clearly a political judgement. Whoever heard of an employer, having successfully victimised a trade unionist, then admitting to the fact that they did so in a written statement?

While an interim relief hearing carries a much more stringent burden of proof than an industrial tribunal, the evidence provided by Paul’s solicitors spoke of a culture of vicious anti-union sentiment within Kirklees Council. That such a thing was ignored beggars belief.

At one infamous meeting, for example, council director Ruth Redfern called for the chant of “We’re going to break Paul Holmes, we’re going to break Unison”. The attendees present were not just assorted dogs-bodies, but fifty members of the council’s senior management.

Does this not suggest a culture of hostility to both Holmes and Unison?

🔴EXCLUSIVE: For years, an unholy alliance of council employers, right-wing union bureaucrats, and disgruntled opponents have attempted to victimise Paul Holmes, the President of Unison. Now the truth is emerging about this disgraceful witch-hunt.https://t.co/wXoHKTZ0xk

Similarly, Paul’s supporters in Time for Real Change recently revealed news of a data leak, alleged to have come from the council.

Paul’s solicitors were right to point out the significance of this. This data leak is one of the biggest of its kind: a full 180 documents; well over 2,000 pages of notes about Paul in total, including such information as his workplace health assessments.

Is such a leak not evidence that the council have gone, and are going, to extreme lengths in order to remove Paul from the scene?

Furthemore, Paul’s lawyers have described the second of the allegations – nonspecific charges of bullying and harassment against Paul – as being “a moveable feast”. What are honest trade unionists to make of this?

No specific incident of misconduct has been cited. Instead, accusations against him have been made in a general way, clearly intended to be difficult for Paul to fairly defend himself against.

And what can be said about the original complaint, which Ms. Bristow – an external consultant – was brought in to investigate? In relation to this, Ms. Bristow concluded:

“On the evidence presented, I am unable to make a finding to support the allegation that he behaved in a bullying and threatening way towards [the complainant].”

In other words, there was no case to answer. So why was the investigation then widened to include anyone who may have an axe to grind? This included two members of Unison who had lost their jobs in connection with allegations of fraud, and who clearly blamed Paul for this.

It is worth going into Ms. Bristow’s findings in more detail, in fact. Out of the 14 staff employed by Kirklees Unison branch, astonishingly only five were interviewed by Ms. Bristow in her investigation.

Despite this, and based on the wider investigations, she identified three possible issues that may have needed further action.

The first was an allegation concerning a meeting (undated) where Ms Bristow stated:

“On balance, I believe that there was a heated exchange of opinions and threatening [sic] towards Stewart which ended up with Paul walking out because he was unhappy with the way that the meeting was going.”

No complaint was made at the time. Then three months later, after Paul was suspended, Kath McHendry – assistant branch secretary, herself under investigation due to racist post she is alleged to have made on her Facebook page – suddenly comes out with this bombshell!

It is significant that Paul left the meeting to defuse matters in this account, incidentally. This is by no means the action of someone who intended to threaten a colleague, as his solicitors highlighted.

The second was an allegation of supposed bullying, intimidatory, and manipulative behaviour, described as follows by Ms Bristow:

“Paul is portrayed as stubborn and stuck in his ways, and someone who likes to be in control of everything that happens in the branch office. The effect of his behaviour has been to undermine staff confidence and self-respect through controlling behaviour and outdated ways of working, which have placed unnecessary stress/strain among both present and ex-staff with the result that some staff have left because of it…”

How can this constitute gross misconduct, by any reasonable person’s definition? Even if things played out the way they are claimed to here, this is clearly not a sacking matter.

Attempts to dress up smaller alleged actions into something worthy of the charge of gross misconduct run like a thread through these proceedings. Despite calling 18 witnesses – long-standing members of Kirklees Unison branch – to testify in Paul’s favour, their views were ignored.

What comes across clearly is that the council were desperate to find something to pin on Paul, and in the end had to resort to this process when the investigator turned up nothing clear-cut. 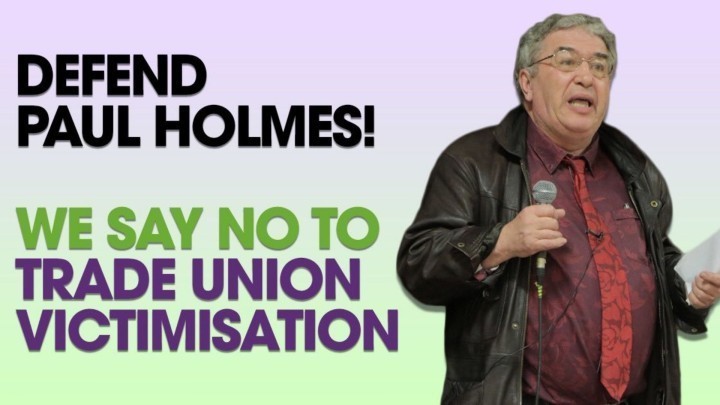 In their document to the court, Paul’s solicitors point to the unreliable nature of several of the witness accounts. One piece of evidence raised, ludicrously, is that Paul asked for someone else telling him to “fuck off” to be minuted. Apparently, this bizarre episode counts as abuse from Paul’s side!

In a similar vein, we return to the original complainant. While reading out the council’s judgement, Parr stated that this individual had been “threatened” by Paul in a meeting on 20 November 2019. This was taken into account when moving to dismiss him.

There’s just one small problem, though: according to Paul’s solicitors, the complainant herself never alleges this in her statement.

In fact, the council themselves admit how flimsy their evidence is. Every single one of their star witnesses, from Angela Waller to Kath McHendry, admit in their statements that not one of them – not one – actually saw Paul bully or harass anyone.

But when your witnesses aren’t giving up the goods themselves, what do you do? Well, you tell them what to say and how to say it!

When an admin officer for Kirklees Unison gave her evidence, she indicated that she had seen details of the complaints that other staff had made. This clearly suggests collusion between witnesses.

Equally unusual was the suggestion that witnesses knew what questions they were going to be asked in advance by the council – as one council witness revealed when she complained that the council’s questioner had “missed two questions out” during one of the hearings. Again, the evidence for collusion is very clear. In the end, the outcome of this hearing demonstrates that, while the legal system may occasionally side with workers from time to time, it cannot be relied upon to deliver justice for our class.

This is because the legal system is a part of the apparatus of the state; and this state, in the final analysis, belongs to and protects the interests of the capitalists

All options must be pursued in order to get justice, of course. But being chained solely to a legalistic strategy only makes it easier for the employers to get their way.

In order to get justice, those members of Kirklees Unison who back Paul Holmes should give serious consideration to the possibility of strike action.

Other unions are already organising such action to defend their own. After hearing that one of their reps was sacked for his trade union activities, Unite-organised workers in Envasses, Liverpool, have declared their intention to strike in his defence.

This shows the way forward. While the legal route must of course be pursued to the end, especially when the case against Paul is as shoddy and slapped-together as it is, it cannot form the main thrust of any victimised trade unionist’s defence. In the end, the balance of class forces is decisive.

To ensure that justice is done, therefore, a mass campaign must be called in Kirklees itself. This should begin with an in-person rally to galvanise the troops and prepare the ground for an industrial ballot, with support given from all other unions organising workers in that council.

The employers and the state can be beaten. History shows this.

But they will only be beaten if the labour movement is prepared to fight them in the right way – by demonstrating in concrete terms that it is rank-and-file union members, and not their bosses, who have the right to pick who represents them.