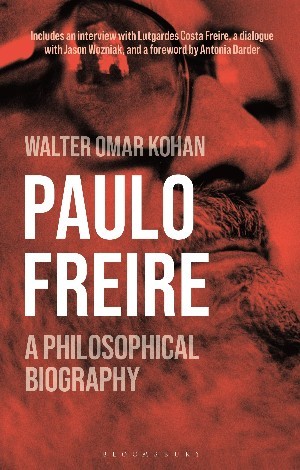 I had intended to write this review in September to celebrate the centenary of Paulo Freire. But in a very Freirian manner, I wandered down other paths and have only now come back to this review. As we will see, errantry is one of the principles of Freire’s approach to education: ‘An educator is someone who walks, wanders, displaces themselves. Without a final destination… (p.93).

Most will know Freire from reading Pedagogy of the Oppressed, his most famous book. Because of his approach to education, he is certainly one of the most vilified Brazilian intellectuals by the right-wing groups led by president Bolsonaro. Freire is blamed for everything that is wrong in education in Brazil. In the protests demanding Dilma Rousseff’s impeachment, banners against Paulo Freire were displayed by right-wing supporters. One banner juxta-positioned his name with ‘Marxist indoctrination’. Paulo Freire would not have denied that he was a Marxist, but his approach to education was on the opposite side of the spectrum from indoctrination.

The book is structured as a dialogue not only between Kohan and Freire, but also with the two translators, Jason Wozniak and Samuel Rocha. The reader is constantly reminded that the original version is in Portuguese. There is even a discussion on how the author and translators agreed on the title on the English version. Should it have been a literal translation from the original Brazilian title, Paulo Freire, Mais do que Nunca? After pages of discussing the different concepts of time, ever, never, today, or always, it was settled on Paulo Freire, a Philosophical Biography. Freire is needed now more than ever and forever.

The Portuguese word ‘princípio’ when translated into English can mean principle or beginning. Kohan asks the reader to keep that in mind when going through the five principles he sees as fundamental in Freire’s approach to education. It is important to stress approach as there is no Freirian method. Any educational method can be used as long as it follows the five principles or beginnings: life, equality, love, errantry, and childhood.

Life is only worth the pain of living if it is questioned. Freire was very much part of the Marxist critique of speculative philosophy. It was not enough to understand reality, you needed to transform it. He was very critical towards ‘very good Marxists’ who could recite phrases and text but had never set foot in a favela and were not committed to transforming life.

It might seem odd to many that Freire described himself as a Christian and a Marxist. It was through Marx’s dialectical materialism that he sought to realise Christian values. In his own words: ‘The more I read Marx, the more I found a certain fundamental basis for remaining Christ’s comrade. I stayed with Marx in his worldliness, looking for Christ in his transcendence’ (p.38).

The second principle is equality. This might seem strange. Surely in an educational process the teacher has more knowledge than the student. How can there be equality in the classroom? The concept of equality comes from the fact that we are all different. If we were all identical the concept of equality would be redundant. It is true that teachers have more knowledge than students. However, that doesn’t take away the fact that we all have the same capacity and vocation to know. A liberating education should restore what an oppressive society takes away from us.

Teachers first learn to be able to teach. When they teach, they relearn with their students. Teachers learn from students how to look at their topic with fresh eyes, how to approach it from a different perspective.

Dialogue is only possible among equals. Nobody dialogues with an inferior or superior. The content can be the most liberating, but if the principle of equality is not present the result will be blind obedience. The student will learn the hierarchical structure which is being imposed. An education that liberates is not about transmitting knowledge. It is about stimulating the student’s own thought process so that they can unveil the manipulations and myths imposed on them. That is only possible through dialogue.

The term conscientization is fundamental. It is a social concept grounded in Marx’s critical theory that focuses on achieving an in-depth understanding of the world and being stimulated to transform it. It is not enough to know that Jack and Jill went up the hill to fetch a pail of water. We need to understand the relationship between Jack and Jill. Who owns the water and hill? Whose decision was it to fetch water? Who will benefit from the water?

To educate is to love. That is the fourth principle. It is impossible to educate without love. Love for life, for your students, for the place you inhabit. Freire once said, ‘the more you love, the more you love’ (p.67). Political love is to live a life in order to expand it, never to limit it. We seek to transform society so that everyone can expand their lives to be able to achieve their full potential. Capitalism is an unacceptable system because it makes true love among people impossible.

As I mentioned in the beginning of this review, errantry is an important principle in Freire’s approach. Freire was a great traveller. He was exiled to Chile in the 1964 military coup. From there he went to Harvard and Europe. He worked in recently liberated, Portuguese speaking African countries. Travelling was an educational process. Freire believed that a life without travel is a life not worth living.

The idea of errantry is not just the physical movement from one place to another. It is also the wandering errant vocation of the imagination and ideas, not just to travel with your body, but also with your ideas. We should be allowed to go from one context of thought to another. It is fitting, therefore, that Freire’s life was intertwined with marches organised by social movements, especially those of the Landless Movement of Brazil. He saw these activists as teachers who ‘invite others to leave and abandon the comfort found in the order of things’ (p.100).

In errantry there is the verb to err, that is, to make mistakes, to be allowed to make mistakes and to learn from them. Freire admitted his errors, his use of patriarchal language in earlier texts, his over-appreciation of the Nicaraguan revolution, and some unfortunate decisions in literacy programmes in Cape Verde and Guinea-Bissau. Errors are perceived as opportunities ‘to err in the other sense of the word, to wander, remove himself from his place of comfort, to journey’ (p.104).

The last principle is childhood. ‘Childhood crosses all of life as a form that gives it curiosity, joy and vitality’ (p.113). Unfortunately, in established education, childhood is perceived as something that has to be educated out of a child. Some children never have the opportunity to live a childhood. In formal education, childhood is seen as something that has to be transformed and not preserved.

This book is highly readable and should be read not only by those involved in education, but also any activist involved in organising social movements.

“A World Without Police” − a book review

The Last Witches of England. A Tragedy of Sorcery and Superstition – book review

The Forty-Year War in Afghanistan: A Chronicle Foretold – book review