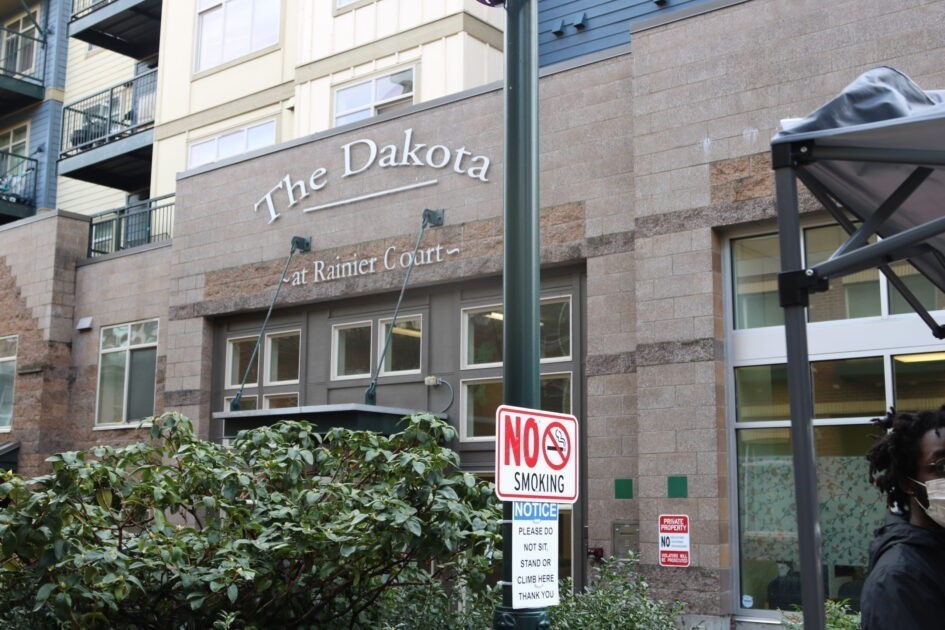 On a characteristically cloudy, winter Seattle morning, three organizers from Socialist Alternative’s City Councilmember Kshama Sawant’s office stood under a canopy on the sidewalk, clipboards and pens held tight. They were gathered outside the Rainier Court Apartments, nonprofit-owned affordable housing for working-class seniors. Their struggle alongside tenants had just won a huge victory in the fall of 2021, forcing the landlord to rescind rent increases. They were there to continue the fight, and to speak to tenants about long standing maintenance issues and safety hazards.

It took no time at all for them to hear common refrains: mold in the walls and carpets, cockroaches, broken appliances, faulty wiring. One tenant who stopped at the table said that her heat hadn’t been working for at least the last three weeks – a period in which Seattle experienced record-long freezing temperatures. Socialist Alternative members and Sawant’s community organizers report that several tenants have faced months, even years, without heating.

“We’ve seen it – they’re horrific, dilapidated conditions,” said Adam Ziemkowski, a socialist and community organizer in Sawant’s office. “The last few weeks of rain and snow, especially, have brought to the fore just how bad the buildings are, and how poorly they can withstand basic wind and weather. We’re talking about tenants who are low-income seniors, a lot of them are on Section 8, and it’s majority Black and brown tenants – a lot of them with disabilities.”

After two deadly fires in Philadelphia and New York City killed dozens due to landlord negligence and overcrowding, some tenants are feeling a renewed urgency to fight to improve the buildings.

Jay Golleyhorn, a tenant at Rainier Court, has lived there for nearly ten years. As a low-income senior living on just $1040 per month, he can’t afford to move, and there’s nowhere else he could afford in a housing market like Seattle’s. Because the door to his building’s parking garage was broken and couldn’t be closed, Golleyhorn’s car was stolen out of the garage last week.

“I was going to give my kid a ride to school,” Golleyhorn said. “You know, that’s my freedom, my independence. And the door’s still broken.”

For Golleyhorn, living in Rainier Court is a constant battering ram of crises. In the same week his car was stolen, he received notice from his doctor that he may have lung cancer – which he links to ten years of living in a moldy building.

“I was walking ten miles a day before I moved in here. Now I can’t walk to the bathroom without wheezing,” he said.

So far, Sawant’s council office has helped tenants file at least 39 complaints with the Seattle Department of Construction and Inspections (SDCI), which determines whether or not units are in compliance with housing codes. In Seattle, a law won by Sawant’s office prevents rent increases on units with such code violations – however, the SDCI must inspect each unit individually.

“We really think that number is a drop in the bucket. We’re at a point where it’s clear that there’s a lot of these issues – hundreds, I bet,” said Ziemkowski. “It’s absurd that they have to take them individually to the SDCI.”

Ziemkowski said that the complaints from tenants run a wide gamut – but some are more hazardous than others. Golleyhorn pointed out two doors in his building that connected hallways to stairwells – the hinges on the doors were broken, so they don’t automatically close and are left open. The fire in the Bronx that killed 17 people earlier this month, officials reported, was so deadly because the door to the originating apartment didn’t automatically close as the law required it to.

“You look at that [door] and tell me that if there was a fire, we wouldn’t all go up,” Golleyhorn said.

However, in 2021, tenants received rent increases of between $100-$240 per unit, on units that were in deplorable condition. Sawant’s office, Socialist Alternative, union members, and the tenants held public rallies and press conferences and marched on SEED’s offices, and succeeded in getting 2021 rent increases rescinded. This is a significant victory, as forcing any landlord to back down on rent increases, much less in a building complex with over 500 low-income families, can come only from a real, organized fightback. And it was a victory that was won despite the Democratic Mayor and Councilmembers refusing to even acknowledge the tenants’ plight.

“On every level, the tenants are being nickel-and-dimed. This is a shameless and systemic way of exploiting working-class renters. [SEED] is providing neither affordable nor quality housing, and we know that they’re actively trying to purchase new buildings to do this to those tenants as well,” Ziemkowski said. “What happened in Philly and the Bronx, it shows how systemic this is under capitalism. We’re talking about nonprofits who are getting public funds, and treating low-income Black and brown seniors utterly callously.”

In 2019, SEED received over $400,000 in government grants, and had over $1.4 million in end-of-year net assets. That year, all three of SEED’s top officers made six-figure salaries.

After Repairs – What’s Next?

The petition that the Rainier Court tenants are using to organize themselves highlights two main demands for their landlord: for SEED to publicly promise no rent increase in 2022, and for SEED to urgently fix all housing code violations.

It also includes two demands for the Seattle City Council: to increase the Amazon Tax won in 2020 to expand funding for affordable social housing, and to vote ‘Yes’ on Sawant’s legislation for citywide rent control with no corporate loopholes.

Seattle, one of the most expensive housing markets in the United States, had less than 15,000 operational public housing units at the end of 2020. Though Seattle’s median household income soared over $100,000 in 2020, more than one-third of renters were cost-burdened. A serious increase in permanently-affordable public housing would, as a starting point, mean that tenants like those at Rainier Court would be able to move out of dangerous conditions to other affordable options. For the thousands of other Seattle renters who are rent-burdened, it would also mean an alternative to the exploitative for-profit housing market and breathing room in their budgets.

“What’s happening at Rainier Court should ring alarm bells. If a nonprofit landlord can gouge tenants with unaffordable rents and blatantly ignore horrendous building conditions, imagine the scale of attacks Seattle renters are enduring from corporate landlords,” said Sawant. “Seattle Rainier Court tenants defeating the 2021 rent increases shows it’s possible to fight and win, and I hope it encourages other renters to fight their exploitative landlords. But we’re not going to solve the crisis building-by-building. Renters, workers, and socialists need to come together to fight for rent control, with no corporate loopholes, to increase the Amazon Tax to massively expand social housing, and win decent living conditions. This means taking on big landlords and developers in a citywide struggle, and calling out the city’s Democratic establishment, who have completely failed to put working people’s need for high-quality, affordable housing over profits for the wealthy.”

Seattle’s situation – a severe lack of truly affordable housing, a high (and rising) general cost of living, and a growing number of rent-burdened people and families – is not unique. Winning rent control in Seattle, especially off the back of Sawant’s recent victory over a right-wing, billionaire-funded recall against her last year, would have the potential to ignite similar fights in cities with similarly dire housing conditions.