People before Profit challenges the President of the EU in Dáil Éireann, not. 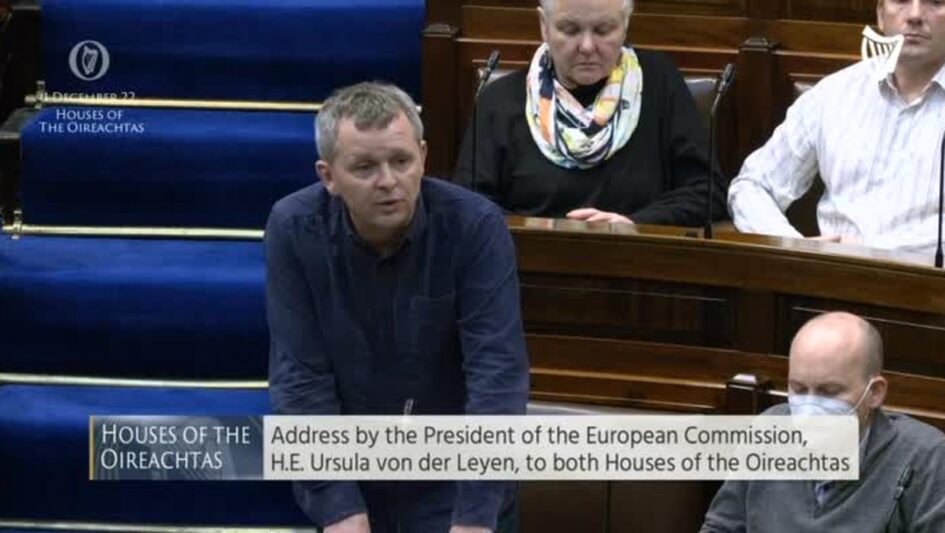 As we have noted in a number of posts, including this one and a series beginning here, some socialists have argued that the war in Ukraine is both an imperialist proxy war and a war of national defence by Ukraine.

If it is the former, then socialists can support neither side and if it is the latter we are obliged to support Ukraine.  It can’t therefore be both.  As has been argued in these posts and others, there are not two wars going on; there are only two sides and the one involving the Ukrainian state involves an alliance with Western imperialism.

There is little doubt that the pretence of opposing the war while also supporting it through defending Ukraine is unsustainable.  It arises from inability to stand against the tide of the massive propaganda campaign waged in Western states by its mass media and the capitalist-controlled press and television.

The ability to sustain this balancing act against this strong head-wind is partially dependent in how sheltered a particular left organisation is from the attention of this media and their exposure to ‘public opinion’, which is pro-Ukrainian because of it.  Rolling with the punches however is painful and unprincipled; you can’t directly fight back on the central issue because you can’t establish an independent working class position consistently opposed to the supporters of the war.

People before Profit (PbP) in Ireland have been successful in getting representation in the Irish parliament but this leaves them exposed to the mass media and the ‘public opinion’ that it is able to manufacture.  Its politics are already weak, focussed as it is on parliament and maintaining their presence in it.  It is therefore no real surprise that when the President of the European Commission, Ursula von der Leyen, spoke to Dáil Éireann on 1 Dec 2022, its nonsense position fell over, and equally unsurprising on which side it fell.

The response to von der Leyen’s speech by Richard Boyd Barrett started by thanking her and ‘Europe’s commitment to ensuring that there will be no hard Border on the island of Ireland or that the exit of Britain from the EU should not in any way adversely impact on the peace on this island.’  You wouldn’t think that PbP had itself supported Brexit, so giving rise to this concern in the first place. But that is a another story.

He went on to note the housing crisis in the Irish State, stating that – ‘while much of the responsibility lies with successive Governments failing to address it, a large component of the responsibility also lies with the decisions taken by the European Commission and the ECB, as part of the troika, to ram billions worth of austerity down the throats of the people of this country.   It is long past time that the EU acknowledged its mistakes in imposing that austerity and devastating consequences it has had.’

Asking for the political representatives of capitalism to say sorry for their policies is useful for what purpose exactly?  What meaningful difference to anyone was Tony Blair’s apology for Britain’s role in the Irish famine? Was this to acknowledge the baleful role of British rule in Ireland or to present it in a good light as it imposed another ‘solution’.  What use was David Cameron’s apology for the British Army murder of fourteen civil rights demonstrators in Derry in 1972, except to absolve the political leadership and pass the blame onto the grunts on the ground?  What use are requests for apologies for past sins when you support their current ones?

Boyd Barrett went on – ‘I also note that this week the President has called – I support her in this – for a tribunal to be established to investigate the undoubted war crimes of Vladimir Putin in Ukraine. We all condemn the utterly barbaric and murderous invasion of Ukraine by Russia. We support the people of Ukraine in their struggle for self-determination.’

Of course, he noted some hypocrisy here – ‘I must say, however, in the week when there is the International Day of Solidarity with the Palestinian People, for the President to not call simultaneously for an investigation into the ongoing war crimes and crimes against humanity being committed by the apartheid state of Israel against Palestinian people makes me wonder about the consistency of the ethics of the EU’s foreign policy.’

He also criticised EU policy on Saudi Arabian and the ‘EU-Moroccan trade agreement, which involves essentially taking the fish and mineral resources of the occupied Western Sahara people.’

Summing up, he said that ‘If we are to condemn, as we must, the war crimes of Putin, we must simultaneously condemn all war crimes and all crimes against humanity, even when they are committed by people that the European Union perceives as allies, such as Israel, Saudi Arabia or those that arm and support them.’

But what has Boyd Barrett got to say about the war crimes of the Ukrainian state?  Does he not know about the continuing attacks on civilians in Donetsk City that have been going on since 2014?  Has he not seen the videos of captured Russian soldiers being shot in the head by Ukrainian armed forces?   If he wants to condemn the human rights abuses in the war in Ukraine, why does he ignore those carried out by the Ukrainian state?  Or is he too hypocritical in his selective condemnation, ignoring the crimes of the capitalist state he supports?

He finishes by declaring – ‘President, we must have consistency in our foreign policy, in our ethics and in our morality if we are to be taken seriously as defenders of human rights and opponents of war.’

Maybe he should stop wondering about the ethics and morality of capitalism and its state machinery and try to recall some of the Marxism he claims to stand for; like Lenin suggesting that the only thing that will end war is socialism.  Maybe then he might become aware that it is not the inconsistency of capitalist states that is the problem; they are really pretty consistent in their foreign policy and support for war. He might also reflect on his support for Western imperialism adjudicating on the crimes of others, and its Ukrainian allies, when perhaps this is something only the working class can do! Just a thought he might want to consider.

This miserable speech is testament to what happens when socialists abandon principled positions and indulge in capitulation to their own rulers, leading them to the frankly idiotic nonsense that pleads for consistent progressive policies from their own capitalist states in the middle of them supporting a reactionary war.

Keeping the Challenges Before Us

‘The world now faces the challenges our people foretold’

Nicaragua Once Again Inaugurates the “People as President”