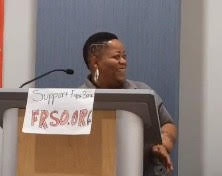 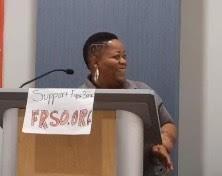 Chicago, IL – The 30th Annual People’s Thanksgiving was held in Chicago on November 21, a fundraiser for Fight Back! and Freedom Road Socialist Organization in Chicago. More than 100 people attended, and the event raised over $4000.

The room in Teamsters City featured some of the most prominent leaders in the movements for Black liberation, Palestinian liberation, and the labor movement.

An historic event was marked when Juan Campos, a newly elected vice president of the Teamsters United slate, was given the Pete Camarata Award for class struggle unionism. Campos joins General President Sean O’Brien and General Secretary-Treasurer Fred Zuckerman, whose victory was announced only a few days before the conference. Local 705 had the greatest voter turnout of any local nationally. The election of this slate will help bring back fighting trade unionism – just in time for the 2023 UPS negotiations. Camarata was a founder of Teamsters for a Democratic Union (TDU) who died in 2014, and a regular attendee at People’s Thanksgiving.

The award was accepted by Kristen Jefferson, a leading volunteer of the campaign, an elected 705 steward and a member of the international steering committee of TDU. Jefferson expressed the fighting spirit of Teamsters United 705, “You should always stand strong, stand in solidarity!”

The award was presented by Robin, Jackson and Aimee Potter, Camarata’s family, all of whom are also trade unionists.

US Palestinian Community Network (USPCN), which in May played a leading role in the massive mobilizations of the Palestinian community and their allies in Chicago in support of uprisings in all of Palestine against the Israeli assault on Gaza and Sheikh Jarrah, a neighborhood in Jerusalem also received an award.

The Karen Lewis Award, named for the late president of CTU, and presented by Vice President of the CTU, Stacy Davis Gates, a past award recipient, went to Denita Armstrong-Shaffer of the Human Rights Committee (HRC) of the Chicago Teachers Union (CTU). HRC has been defending their anti-racist curriculum against attacks by white nationalists; they have also campaigned against racist policing and in support of community control of the police in Chicago.