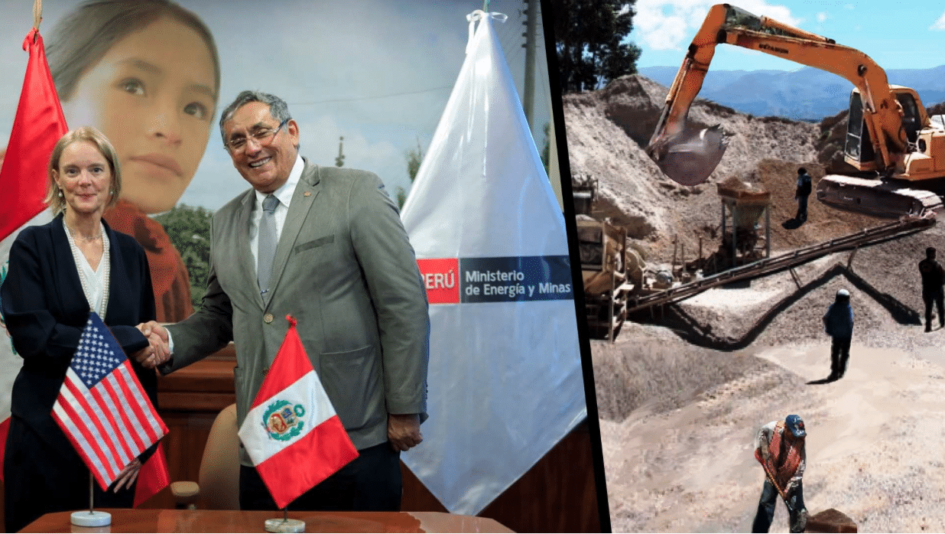 The U.S. ambassador in Peru, Lisa Kenna, is a CIA veteran who supported a parliamentary coup in December 2022 that overthrew the South American nation’s democratically elected left-wing president, Pedro Castillo.

Castillo was subsequently imprisoned for 18 months without due process, setting off massive protests across Peru. The unelected government responded with extreme violence, killing approximately 50 protesters in just over a month.

One day before the December 7 coup, the former CIA officer turned U.S. ambassador met with Peru’s defense minister, who then told the country’s powerful military to turn against President Castillo.

Since then, Kenna has been quite busy, regularly meeting with top officials in Peru’s coup government, including unelected President Dina Boluarte and her ministers.

Peru’s Ministry of Energy and Mines boasted that they discussed “investment” opportunities and plans to “develop” and “expand” the extractive industries.

One of Earth’s top producers of copper, lead, zinc, tin, silver, and gold, Peru’s economy relies heavily on the mining sector, which represents more than half of total national exports and over 10% of GDP.

The world’s three largest transnational mining corporations—BHP, Rio Tinto, and Glencore—are heavily invested in Peru, along with other prominent companies from Canada, Brazil, Switzerland, Britain, the U.S., Japan, and Australia.

Peru is the planet’s second-biggest copper producer (after its neighbor Chile), meaning it will become increasingly important in the global shift toward renewable energy technologies.

U.S. investment banking giant Goldman Sachs stated in 2022 that “copper is the new oil”, writing: “The critical role copper will play in achieving the Paris climate goals cannot be overstated… As the most cost-effective conductive material, copper sits at the heart of capturing, storing and transporting these new sources of energy”.

Peru is also a significant producer of liquified natural gas (LNG). Its LNG exports are largely overseen by foreign corporations like Shell.

Europe became the top importer of Peruvian LNG in 2022, after the European Union boycotted Russian energy over the proxy war in Ukraine.

While natural resources are not the only reason for these coups in Latin America, they are a significant factor.

Following the violent putsch in Peru’s mineral-rich neighbor Bolivia in 2019, a critic wrote to billionaire Elon Musk on Twitter, “You know what wasn’t in the best interest of people? The U.S. government organizing a coup against Evo Morales in Bolivia so you could obtain the lithium there”.

Musk replied, “We will coup whoever we want! Deal with it”.

Peru’s President Castillo: ‘We want our natural resources to directly benefit the people’

When he ran for office in 2021, left-wing presidential candidate Pedro Castillo had made one of the central themes of his campaign the need to reassert popular control over Peru’s natural resources.

Condemning foreign companies for “pillaging” the country, he called to renegotiate contracts to ensure that 70% of all proceeds from mining went to the state, to fund social programs.

A few weeks before the presidential elections, Castillo said, “Let’s be clear: these decades of betrayal, corruption, and cynicism are the symptoms of this neoliberal system dedicated exclusively to the exploitation of our people and natural resources for the benefit of a few scoundrels”.

When he entered office, Castillo was very limited in what he could do politically. The right-wing opposition had a majority in the congress, and they were hellbent on destabilizing and eventually removing him with a presidential “vacancy”. They used Peru’s legislature and the heavily politicized and corrupt judiciary to launch constant attacks against Castillo, as part of a campaign of systematic persecution and lawfare.

But Castillo did what he could. The president announced a “second agrarian reform” and declared, “We are rescuing the resources of the country for all Peruvians”. He explained his goal: “We want our natural resources to directly benefit the people“.

Castillo’s government made plans with left-wing President Gustavo Petro in neighboring Colombia to develop gas infrastructure in Peru and expand internal use.

This was part of Castillo’s progressive economic model of import substitution industrialization, which aimed to grow local industry and boost domestic consumption, so Peru would not rely exclusively on low value-added exports.

The Ministry of Energy and Mines tweeted on January 18 that it had just conducted a “high-level institutional dialogue between Peru and the United States, which addressed themes of development of the mining sector”.

The ministry said they discussed “themes linked to the expansion of natural gas, mining investments, and the development of renewable energies in our country”.

It added that “Minister Vera was grateful for the support from the North American government in mining-energy issues, and he reiterated the will of the national government, whose priority is the expansion of natural gas, energy security, and the petrochemical development of the south of the country”. 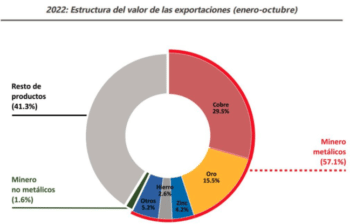 The Peruvian government itself has publicly stated that its economy relies heavily on mining and exporting minerals such as copper, zinc, gold, silver, lead, iron, and molybdenum.

The mining sector made up 58.7% of all of Peru’s exports, 57.1% of which were metals and 1.6% of which were non-metals, according to the most recent publicly available statistics, from January to October 2022.

Copper, gold, zinc, and iron represented 88.4% of the total value of Peru’s mineral exports, and 51.9% of the value of all of the country’s exports.

As of 2022, the largest corporate investor in Peru’s mining sector was the UK-based company Anglo American.

The second biggest investor was Compañía Minera Antamina S.A., a local firm that is majority owned by Australian and Swiss mining giants. The third was the U.S.-Mexican Southern Copper Corporation.

Local communities in the South American country, especially those of Indigenous descent, have long protested the mining companies that devastate their environment.

These rural communities were the base of support for President Castillo. Since the coup, they have organized massive protests, demanding that he be freed, that new elections be held, and that the government convene a constituent assembly to write a new constitution, to replace the current one that was inherited from the former U.S.-backed far-right dictatorship of Alberto Fujimori. 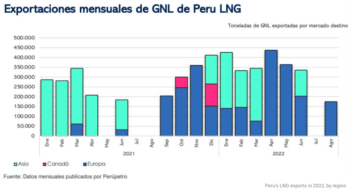 Peru’s gas sector saw a huge boom in 2022, with LNG exports increasing by 85% in the first eight months of the year, in comparison with the same period in 2021.

One of the main reasons for this surge was Europe’s sky-high demand for gas.

Before 2022, most of Peru’s LNG had gone to Asia (primarily Japan, South Korea, and China). But as tensions between NATO and Russia escalated in late 2021 and early 2022, and the EU moved to boycott Russian energy, this drastically shifted.

The vast majority of Peru’s LNG exports went to Europe in 2022, primarily to Britain and Spain.

In months like April, May, and August, all of Peru’s LNG exports went to Europe, according to data published by the state company Perúpetro.

While Peru only exports a relatively small amount of LNG when compared to the United States—which quickly established itself as the world’s top LNG exporter in 2022—the South American nation has become an important energy partner for Europe.

Ironically, by pledging to boycott Russian oil, Spain also ended up increasing its imports of more expensive Russian LNG by 37% in 2022. 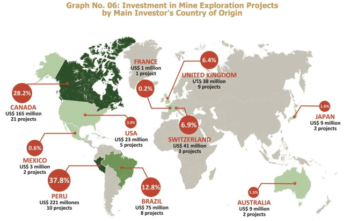 Foreign companies have made a killing in Peru’s mining sector.

In promotional materials urging more foreign investment, the Peruvian government boasted that the planet’s three largest mining corporations are active in the country: BHP Group, of Australia; Rio Tinto, of Britain and Australia; and Glencore, of Switzerland.

The Ministry of Energy and Mines wrote with pride in 2018: “The world’s most important companies in the mining sector are making investments in our country. Due to our mineral reserves, Peru is a market that is always taken into account by these companies when they decide their investment budgets in exploration and exploitation”. 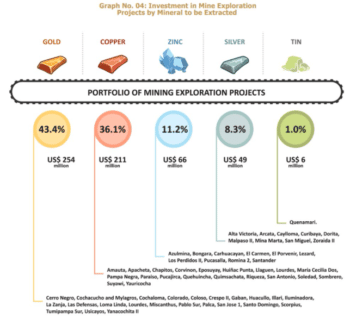 Many local mining companies in Peru are owned by foreign corporate giants.

The second-largest investor in mining in Peru, the Compañía Minera Antamina (Antamina Mining Company in English), was 33.75% owned by BHP, another 33.75% owned by Glencore, 22.5% by Canada’s Teck Resources, and 10% by Japan’s Mitsubishi, as of 2018.

The Compañía Minera Antamina operates in Peru’s western Áncash region, and was responsible for roughly one-fifth of national copper production and 15% of national silver production in 2018.

The British-Australian Rio Tinto corporation oversees the La Granja mining project in the northwestern Cajamarca region. Peru was the source of 15% of Rio Tinto’s global production of copper in 2017.

Other large transnational corporations active in Peru’s mining sector include the U.S. company Freeport-McMoRan and Mexican Southern Copper Corporation, both of which are based in Phoenix, Arizona; as well as Canada’s Barrick Gold. 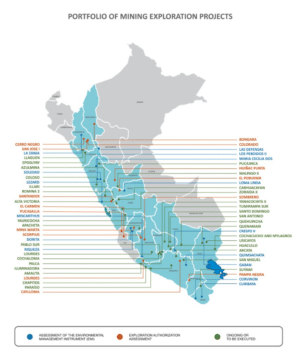 But this is just to mention existing mining operations. Foreign companies are also heavily invested in exploration for new projects.

The top foreign countries whose companies are investing in mining exploration in Peru are Canada, Brazil, Switzerland, Britain, the U.S., Japan, and Australia, according to a 2022 report from the Ministry of Energy and Mines.

Companies located in Peru are responsible for 37.8% of investment in exploration, but this figure can be misleading because many of these firms are owned by much bigger transnational corporations.

Mining exploration projects are taking place all across western Peru.

Many of these regions, which are underdeveloped and suffer from high rates of poverty, have seen large protests against the U.S.-backed coup regime and in support of Castillo.