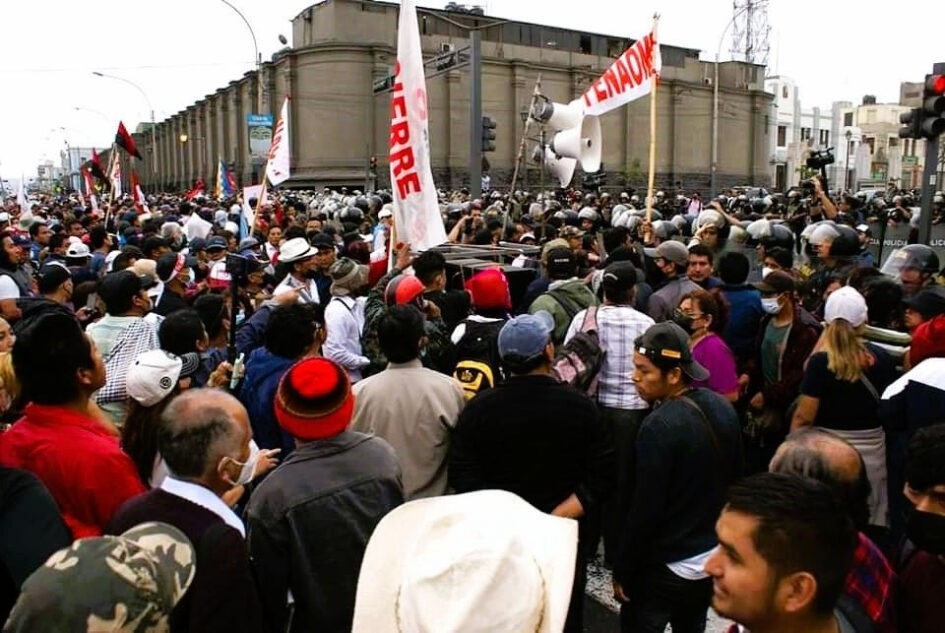 On December 7 leftist Peruvian president Pedro Castillo was overthrown in a right-wing coup led by the country’s reactionary Congress.

Ever since Castillo won a stunning upset as a Marxist in June, 2021, the right in Peru has been working ceaselessly to undermine, destabilize and destroy the Castillo presidency.

Previously they had already tried to impeach him twice and now have succeeded in bringing about his downfall using his entirely justified attempts to stop this as a shameful smokescreen.

The parliamentary coup has been condemned by leaders across the region like Luis Arce, Evo Morales, Gustavo Petro and Nicolas Maduro.

Here is a roundup of the news so far:

June 6, 2021, was a day which shocked many in Peru’s oligarchy. Pedro Castillo Terrones, a rural schoolteacher who had never before been elected to office, won the second round of the presidential election with just over 50.13% of the vote. More than 8.8 million people voted for Castillo’s program of profound social reforms and the promise of a new constitution against the far-right’s candidate, Keiko Fujimori. In a dramatic turn of events, the historical agenda of neoliberalism and repression, passed down by former Peruvian dictator Alberto Fujimori to his daughter Keiko, was rejected at the polls.

From that day on, still in disbelief, the Peruvian oligarchy declared war on Castillo. They made the next 18 months for the new president a period of great hostility as they sought to destabilize his government with a multi-pronged attack that included significant use of lawfare. With a call to “throw out communism,” plans were made by the oligarchy’s leading business group, the National Society of Industries, to make the country ungovernable under Castillo.

In October 2021, recordings were released that revealed that since June 2021, this group of industrialists, along with other members of Peru’s elite and leaders of the right-wing opposition parties, had been planning a series of actions including financing protests and strikes. Groups of former military personnel, allied with far-right politicians like Fujimori, began to openly call for the violent overthrow of Castillo, threatening government officials and left-leaning journalists.

It is worth noting that in his past 16 months in office, Castillo was forced to reshuffle his cabinet four times. He changed over six dozen ministers over disputes and disagreements with Congress, in an attempt to maintain unity across the political spectrum. He had six investigations opened against him, accusing him of the alleged crimes of corruption, criminal organization, influence peddling, accomplice to collusion, personal concealment against the administration of justice, as well as plagiarism of his master’s thesis.

Castillo had himself condemned on several occasions that since his inauguration in late July 2021, his government had been constantly attacked by the right-wing oligarchy that controls public agencies in the country, such as the prosecutor’s office. The far-right sectors, whom he alleged never accepted his electoral victory, had been running smear campaigns in mainstream media against him and his ministers with the aim to oust them. The opposition majority Congress, taking advantage of these campaigns, had been regularly promoting impeachment motions against Castillo and his cabinet ministers. The country’s so-called independent judiciary had been supporting their baseless accusations unconstitutionally.

In October, Castillo tried to resolve the long-standing crisis and requested the OAS to activate the Democratic Charter and initiate a consultation process in the country with all the political forces and state powers to find a way out of the political conflict. and put an end to the repeated impeachment attempts against him.

“The right-wing enemies of the people don’t accept anti-imperialist governments. We must remain united and never surrender. Apologists will make excuses for these coups. They always do, sure, not every coup is as simple as a blatant Pinochet-style military coup. But these are a new type of coup, using hybrid war, lawfare, 4th generation warfare. Don’t let disingenuous appeals to “nuance” distract you. The free people of Peru face the challenge of a deep reflection with clarity before this new onslaught of imperialism. We must stick together and never give up. Right-wing enemies of the people do not accept anti-imperialist governments.”

President Nicolas Maduro spoke about the developments in Peru before a massive crowd at the end of a march to commemorate “Day of Love and Loyalty to Comandante Hugo Chavez”. Today the country honors the late leader of the Bolivarian Revolution on the tenth anniversary of his final address to the Venezuelan people. Below is a transcript of the President’s remarks.

“The Peruvian people elected a teacher to the presidency, Pedro Castillo. And from the first moment of the election they didn’t want to recognize his triumph. In the end, forced by reality, they had to recognize his triumph as president. And once sworn in on July 28, 2021, the conspiracy for a parliamentary coup begins and the attack begins.

The attrition. Vote of no confidence against ministers. Against the heads of the cabinet. A permanent harassment. Until they took him away. Blow by blow. Harassment, in a parliamentary, political and judicial persecution without limit, they took him to the extreme of trying to dissolve the Congress of Peru. All the circumstances we’ve seen. They are the oligarchic elites that wont allow a simple teacher to reach the presidency of Peru and try to govern for the people.

All of the right-wing has attacked the president, former president Pedro Castillo, and now comes the stage of humiliation. Now they are going to humiliate him.

I only make a reflection and I hope that the Peruvian people, within the framework of its Constitution, will sooner rather than later achieve its path of liberation, its path of true democracy, its path of happiness and full realization. Peace for Peru! Democracy for Peru! Equality for Peru! Justice for Peru! We Bolivarians ask from South America with our love.”

The crisis in Peru prompted concerns and reactions from leaders across Latin America.

Mexican President Andrés Manuel López Obrador, in a thread on Twitter, said that “non-intervention and self-determination of the people is a fundamental principle of our foreign policy. That is what we stick to in the case of what happened in Peru. However, we consider it unfortunate that, due to the interests of the economic and political elites, since the beginning of Pedro Castillo’s legitimate presidency, an environment of confrontation and hostility has been maintained against him until it led him to make decisions that have served his adversaries to consummate his dismissal with the sui generis precept of “moral incapacity.” Hopefully human rights are respected and there is democratic stability for the benefit of the people,”

Bolivian President Luis Arce also condemned Castillo’s dismissal. “From the beginning, the Peruvian right tried to overthrow a government, democratically elected by the people, the humble classes, which seeks more inclusion and social justice. We regret what happened in the sister Republic of Peru, and send all our solidarity,” tweeted Arce.

“The constant harassment of anti-democratic elites against progressive, popular and legitimately constituted governments must be condemned by all. We advocate that democracy, peace and respect for Human Rights prevail for the benefit of the Peruvian people,” he added in another tweet.

The Ministry of Foreign Affairs of Honduras, in a statement, expressed the country’s “strong condemnation of the coup d’état in Peru, which is the result of a series of events to erode the democracy and sovereign will of the people represented by President Pedro Castillo, for whom his physical integrity and human rights are required to be respected. The Government of Honduras hopes that the democratic order and electoral sovereignty of Peru will regain the rule of law and guarantee its rights in the face of this serious constitutional breach. Coups must not be perpetrated.”

“I followed with great concern the events that led to the constitutional removal of the president of Peru, Pedro Castillo. It is always regrettable that a democratically elected president has this fate, but I understand that everything was forwarded in the constitutional framework. What Peru and South America need right now is dialogue, tolerance and democratic coexistence, to solve the real problems we all face. I hope that President Dina Boluarte succeeds in her task of reconciling the country and leading it on the path of development and social peace. I hope that all Peruvian political forces work together, within a constructive democratic coexistence, the only way capable of bringing peace and prosperity to the dear and fraternal people of Peru,” said Lula in a statement.

Colombian President Gustavo Petro denounced the parliamentary coup against him and stressed that “anti-democracy cannot be fought with anti-democracy.”

“Pedro Castillo, for being a teacher in the mountains and president of the popular election, was cornered from the first day. He did not achieve the mobilization of the people who elected him, he allowed himself to be led to political and democratic suicide. I hope Peru finds the path of dialogue in its society. When I met Pedro Castillo, they were trying to break into the government palace to arrest his wife and daughter. Troubled, he received me. A parliamentary coup against them was already taking place. I was surprised that they remained locked up in the Palace, isolated from the people who elected them. Undoubtedly, Pedro Castillo was wrong when trying to use the article of the Peruvian constitution that allows the dissolution of the Congress that had already decided to remove him without respecting the popular will. Anti-democracy cannot be fought with anti-democracy. It will be up to the people of Peru, and no one else, to resolve the institutional crisis raised and the absence of true representation. My greetings and respect to the great Peruvian people, the people of the mountains and the desert,” wrote Petro in a series of tweets.

Petro later called for the Inter-American Human Rights Commission (IACHR) to apply the American Convention on Human Rights and expedite protective measures in favor of Peruvian President Pedro Castillo. “The right to elect and be elected and the right to an independent court of law have been violated,” he wrote in a post on Twitter.

It seems the people may be rising as they did in Bolivia:

“How to Prepare a Coup d’état”; the Latest Recipe of the Peruvian Right-wing Parties

Iranian teachers take to the streets: “You will soon be overthrown!”