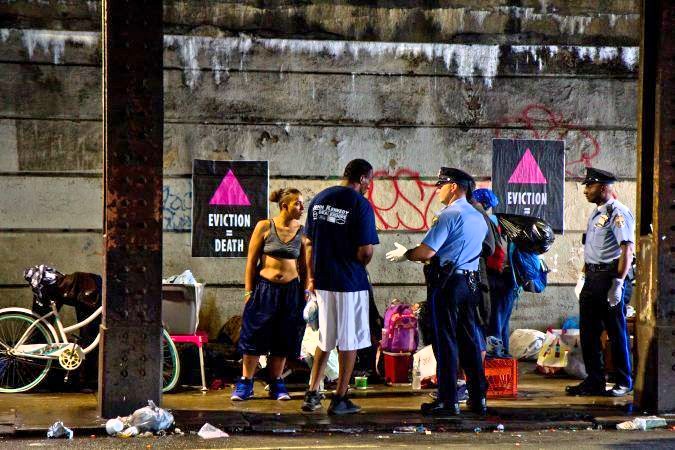 What were folks rallying about?

The City of Philadelphia had announced that it would once again attempt to clear homeless encampments in its Kensington section Aug. 18. For some time, residents there have asked the city to assist with problems raised by the encampments, and they resent that their pleas for help have been ignored.

A diverse array of groups participated in the protest, including Angels In Motion (an organization that assists addicted people), Harrowgate Civic Association, Kensington Neighborhood Association, Somerset Neighbors for Better Living, Impact Services, Operation Save Our City and the Philadelphia Overdose Prevention Network.

Residents fear that — as in previous attempts — what will happen is that people in the camps will be pushed around and end up back where they were. This is a legitimate fear; several attempts to move the addicts out of the neighborhood have failed.

Addicted and homeless people in Kensington deserve treatment options and housing — because housing and health care are human rights. The residents of Kensington who are not houseless or addicted deserve a clean and safe neighborhood — something denied them in the past, because of the city’s failure to provide assistance to the unhoused and those with addictions or mental illnesses.

Historically, the relationship between harm reductionists, addicts in the Kensington neighborhood and neighbor residents has been fraught with argument. Now the failures of Mayor Jim Kenney and the City Council to address the issues actively and adequately in Kensington have brought together two sides whom nobody thought would come together.

At the Aug. 11 rally and march, protesters chanted, “Where is Jim Kenney?” and made it known that hiding wouldn’t save the mayor from the cries of people, demanding that he act on the conditions in Kensington.

As plans by the city stand, those affected by the upcoming sweep won’t get housing before the Aug. 18 deadline. The Office of Homeless Services claims they have beds and wish to offer service. But there are 900 homeless people in Philadelphia, and not that many beds. There have never been enough beds.

City Councilperson Maria Quinones Sanchez demanded the city act and said the money is there. She said there needs to be quality treatment and treatment beds for the addicted, as well as expanded medication-assisted treatment.

Homelessness and the opioid crisis

Philadelphia’s opioid crisis — which has been raging for years — is at the heart of the issues in Kensington.

The heroin “fix” to be found in the Kensington neighborhood is legendary on the East Coast. This fix — tainted by fentanyl and fentanyl analogues like carfentanil, acetylfentanyl, butyrfentanyl, acrylfentanyl, ohmefentanyl — and by a different new “cut,” xylazine — is killing people by the dozens and even the hundreds.

People come from throughout the city and from nearby areas in Pennsylvania and New Jersey to experience this fix. Kensington has the highest number of drug overdoses and the highest level of drug-related violence in the city.

This writer has been to Kensington in search of that fix and knows that nothing becomes more important to those who seek it. People begin to live on the streets and yet are still aware they need housing and mental health care.

But there is no concrete plan by the city to give the people what they need. Without a plan, nobody is helped, and nothing changes.

Philadelphia’s activists have been struggling to get the city to deal with these problems. The people of Kensington should not have to see drug addiction and mental illness on their doorsteps, but they do. They know that people on the street are people who need help, people who have fallen on dark times — but this shouldn’t be the neighbors’ job to deal with.

The sweep planned by the city will not treat the problem and will not be a permanent sweep. The people pushed out will come back again — that’s what happened before. The money spent by the city would be better used to provide housing and treatment for mental and physical ills to all those in need.

The problems in Kensington have increased as the opioid epidemic worsens. Nothing so far has helped the situation. But we have the power to end this cycle. The neighbors must be listened to; the community must be listened to; and addicts must be treated and helped. Revolutionaries with a harm reductionist view can aid both activists and residents and help solve these problems.

The Crisis After Trump—Podcast Edition