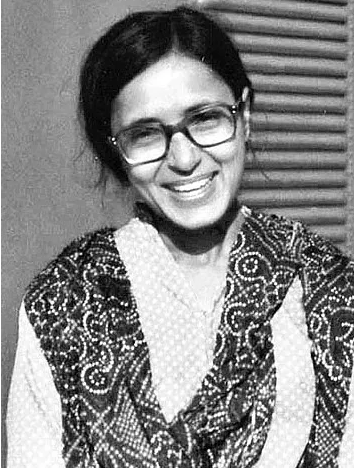 Philosophical trends in feminism is a collection of essays by Indian revolutionary Anuradha Roy. I met Anuradha in India in 2004 on a fact finding tour with lawyers investigating human rights abuses in Andhra Pradesh. We spent several hours together discussing the state of the womens movement in India and New Zealand, and the West more broadly. She was a profound thinker whose ideas were honed from decades of working along side the poorest women in India. She was keenly interested in developments in the West and had lived in Britain in the 1970s so had first hand knowledge of second wave feminism, its strengths and weaknesses. A collection of her writings on feminism have been published with a foreword by Arundhati Roy which we reprint here. Daphna Whitmore

She died in a Mumbai hospital on the morning of 12 April 2008, of malaria. She had probably picked it up in the jungles of Jharkhand where she had been teaching study classes to a group of Adivasi women. In this great democracy of ours, Anuradha Ghandy was what is known as a ‘Maoist terrorist,’ liable to be arrested, or, more likely, shot in a fake ‘encounter,’ like hundreds of her colleagues have been. When this terrorist got high fever and went to a hospital to have
her blood tested, she left a false name and a dud phone number with the doctor who was treating her. So he could not get through to her to tell her that the tests showed that she had the potentially fatal malaria falciparum. Anuradha’s organs began to fail, one by one. By the time she was admitted to the hospital on 11 April, it was too late. And so, in this entirely unnecessary way, we lost her.

She was 54 years old when she died, and had spent more than 30 years of her life, most of the underground, as a committed revolutionary.

I never had the good fortune of meeting Anuradha Ghandy, but when I attended the memorial service after she died I could tell that she was, above all, a woman who was not just greatly admired, but one who had been deeply loved. I was a little puzzled at the constant references that people who knew her made to her ‘sacrifices.’ Presumably, by this, they meant that she had sacrificed the comfort and security of a middle-class life, for radical politics. To me, however, Anuradha Ghandy comes across as someone who happily traded in tedium and banality to follow her dream. She was no saint or missionary. She lived an exhilarating life that was hard, but fulfilling.

The young Anuradha, like so many others of her generation, was inspired by the Naxalite uprising in West Bengal. As a student in Elphinstone College, she was deeply affected by the famine that stalked rural Maharashtra in the 1970s. It was working with the victims of desperate hunger that set her thinking and pitch-forked her into her journey into militant
politics. She began her working life as a lecturer in Wilson College in Mumbai, but by 1982 she shifted to Nagpur. Over the next few years, she worked in Nagpur, Chandrapur, Amravati, Jabalpur and Yavatmal, organizing the poorest of the poor — construction workers, coal-mine workers — and deepening her understanding of the Dalit movement.

In the late 1990s, even though she had been diagnosed with multiple sclerosis, she went to Bastar and lived in the Dandakaranya forest with the People’s Liberation Guerilla Army (PLGA) for three years. Here, she worked to strengthen and expand the extraordinary women’s organization, perhaps the biggest feminist organization in the country — the Krantikari Adivasi Mahila Sanghatan (KAMS) that has more than 90,000 members. The KAMS is probably one of India’s best kept secrets.

Anuradha always said that the most fulfilling years of her life were these years that she spent with the People’s War (now CPI-Maoist) guerillas in Dandakaranya. When I visited the area almost two years after Anuradha’s death, I shared her awe and excitement about the KAMS and had to rethink some of my own easy assumptions about women and armed struggle.

In an essay in this collection, writing under the pseudonym Avanti, Anuradha says:

As we approach March 8, early in the dawn of this new century remarkable developments are taking place on the women’s front in India. Deep in the forests and plains of central India, in the backward villages of Andhra Pradesh and up in the hills among the tribals in the state, in the forests and plains of Bihar and Jharkhand women are getting organized actively to break the shackles of feudal patriarchy and make the New Democratic Revolution.

It is a women’s liberation movement of peasant women in rural India, a part of the people’s war being waged by the oppressed peasantry under revolutionary leadership.

For the past few years thousands of women are gathering in hundreds of villages to celebrate 8 March. Women are gathering together to march through the streets of a small town like Narayanpur to oppose the Miss World beauty contest, they are marching with their children through the tehsil towns and market villages in backward Bastar to demand proper schooling for their children. They are blocking roads to protest against rape cases, and confronting the police to demand that the sale of liquor be banned. And hundreds of young women are becoming guerrilla fighters in the army of the oppressed, throwing off the shackles of their traditional life of drudgery. Dressed in fatigues, a red star on their olive green caps, a rifle on their shoulders, these young women brimming with the confidence that the fight against patriarchy is integrally linked to the fight against the ruling classes of this semifeudal, semi-colonial India, are equipping themselves with the military knowledge to take on the third largest army of the exploiters. This is a social and political awakening among the poorest of the poor women in rural India. It is a scenario that has emerged far from the unseeing eyes of the bourgeois media, far from the flash and glitter of TV cameras. They are the signs of a transformation coming into the lives of the rural poor as they participate in the great struggle for revolution.

But this revolutionary women’s movement has not emerged overnight, and nor has it emerged spontaneously merely from propaganda. The women’s movement has grown with the growth of armed struggle. Contrary to general opinion, the launching of armed struggle in the early 1980s by the communist revolutionary forces in various parts of the country, the militant struggle against feudal oppression gave the confidence to peasant women to participate in struggles in large numbers and then to stand up and fight for their rights. Women who constitute the most oppressed among the oppressed, poor peasant and landless peasant women, who have lacked not only an identity and voice but also a name, have become activists for the women’s organizations in their villages and guerrilla fighters.Thus with the spread and growth of the armed struggle the women’s mobilization and women’s organization have also grown, leading to the emergence of this revolutionary women’s movement, one of the strongest and most powerful women’s movements in the country today. But it is unrecognized and ignored, a ploy of the ruling classes that will try to suppress any news and acknowledgement as long as it can.

Her obvious enthusiasm for the women’s movement in Dandakaranya did not blind her to the problems that women comrades faced within the revolutionary movement. At the time of her death, that is what she was working on — how to purge the Maoist Party of the vestiges of continuing discrimination against women and the various shades of patriarchy that stubbornly persisted among those male comrades who called themselves revolutionary.

In the time I spent with the PLGA in Bastar, many comrades remembered her with such touching affection. Comrade Janaki was the name they knew her by. They had a worn photograph of her, in fatigues and her huge trademark glasses, standing in the forest, beaming, with a rifle slung over her shoulder.

She’s gone now — Anu, Avanti, Janaki. And she’s left her comrades with a sense of loss they may never get over. She has left behind this sheaf of paper, these writings, notes and essays. And I have been given the task of introducing them to a wider audience.

It has been hard to work out how to read these writings. Clearly, they were not written with a view to be published as a collection. At first reading they could seem somewhat basic, often repetitive, a little didactic. But a second and third reading made me see them differently. I see them now as Anuradha’s notes to herself. Their sketchy, uneven quality, the fact that some of her assertions explode off the page like hand-grenades, makes them that much more personal.

Reading through them you catch glimpses of the mind of someone who could have been a serious scholar or academic but was overtaken by her conscience and found it impossible to sit back and merely theorize about the terrible injustices she saw around her. These writings
reveal a person who is doing all she can to link theory and practice, action and thought.

Having decided to do something real and urgent for the country she lived in, and the people she lived amongst, in these writings, Anuradha tries to tell us (and herself) why she became a Marxist-Leninist and not a liberal activist, or a radical feminist, or an eco-feminist or an Ambedkarite. To do this, she takes us on a basic guided tour of a history of these movements, with quick thumb-nail analyses of various ideologies, ticking off their advantages and
drawbacks like a teacher correcting an examination paper with a thick fluorescent marker.

The insights and observations sometimes lapse into easy sloganeering, but often they are profound and occasionally they’re epiphanic — and could only have come from someone
who has a razor sharp political mind and knows her subject intimately, from observation and experience, not merely from history and sociology textbooks.

Perhaps Anuradha Ghandy’s greatest contribution, in her writing, as well as the politics she practiced, is her work on gender and on Dalit issues. She is sharply critical of the orthodox Marxist interpretation of caste (‘caste is class’) as being somewhat intellectually lazy.
She points out that her own party has made mistakes in the past in not being able to understand the caste issue properly.

She critiques the Dalit movement for turning into an identity struggle, reformist not
revolutionary, futile in its search for justice within an intrinsically unjust social system. She believes that without dismantling patriarchy and the caste-system, brick, by painful brick, there can be no New Democratic Revolution.

In her writings on caste and gender, Anuradha Ghandy shows us a mind and an attitude that is
unafraid of nuance, unafraid of engaging with dogma, unafraid of telling it like it is — to her comrades as well as to the system that she fought against all her life. What a woman she was.