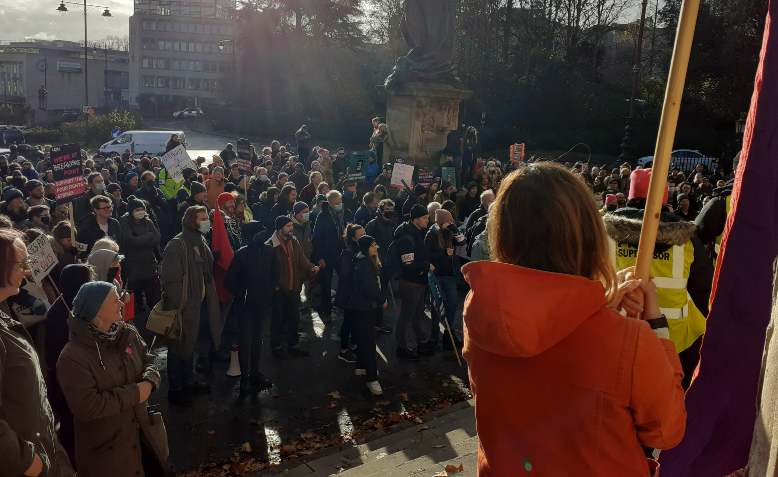 Counterfire’s reports from the first day of UCU picket lines

After a strong early showing on different picket lines, 300-400 strikers and supporters converged at the Victoria Rooms for a lively rally. Speakers included the Metropolitan Mayor Daniel Norris, a representative from the Trades Council, a Green Party speaker and a student who had been leading the campaign to win support at the university. After that we marched through the city to College Green, getting plenty of support along the way.

The mood amongst the strikers is defiant. All agreed that despite a series of strikes, management is not taking staff issues remotely seriously. Activists recognise that it’s going to take more than a three-day strike to turn the situation around and they are preparing for sustained action in the new year.

On 1 December 2021, UCU members from the University of York assembled in the early morning gloom at picket lines that represent a failure of our employers and the senior management of universities throughout the UK to provide their staff with reasonable and equitable pay now and in the future, in the form of a pension.

The unjustified and unsupportable attack on the University Superannuation Scheme, combined with a 20% real-terms pay cut in a decade, workloads that lead to ill health, and a morally indefensible gender pay gap, in a casualised workforce are the reason why academics and professional support staff alike assembled to tell employers that inaction is not an option.

Action continued on 2 December, despite snow and a biting wind which did not prevent staff, students, alumni and supporters standing in solidarity on the picket lines. We heard one story from a former politics student whose father had stood up for his pension in the 1970s. That same pension had paid for his mother’s care costs. We had a former teacher who had graduated York and came to bring delicious flapjacks to show solidarity and express rage at the treatment of staff and students by our senior managers. We heard many stories and some excellent speeches at our daily rally.

We would all rather be teaching our students, supporting students, researching, or doing our essential roles in running this university that claims to be for the public good. Instead, we are having to once again remind the VC and his team what public good looks like.

Despite the winter chill, spirits remain high among lecturers and administrative staff at Essex University on the second day of a national strike action over pensions and work conditions. Approximately 40 UCU members joined three picket lines on the entrances to the Colchester campus. Students and guests provided additional solidarity and delicious cakes. This was followed by a digital teach out in the afternoon. More teach outs at the Quaker Meeting House and a public rally in the town centre are planned for tomorrow.

At least 100 people turned out to support the picket lines on several sites at Durham University. There was high morale among strikers and solid support from students.