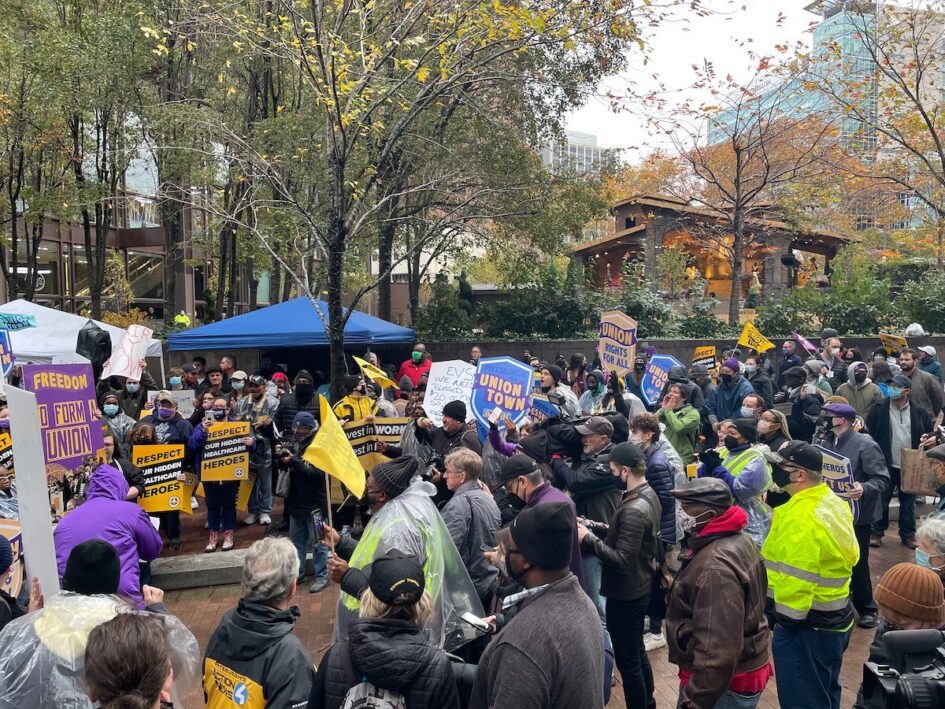 On November 18, hundreds of workers and community members rallied downtown to support a one-day strike of University of Pittsburgh Medical Center workers who walked off the job. UPMC, the biggest employer in Pittsburgh, has 92,000 employees in 40 hospitals and various nursing homes and research facilities.

The workers, who are facing poor conditions and low wages, are fighting again to unionize their workplace, after a defeated attempt a few years ago. UPMC management fought brutally against a 2012 attempt to unionize, using various tactics that the NLRB ruled illegal. UPMC hired an army of anti-union advisors, surveilled workers, threatened and harassed their entire staff and accrued at least 128 alleged violations of workers’ rights during the 2012 union drive.

One worker spoke about the crippling medical debt she ironically owes back to UPMC for her medical care. The inadequate healthcare provided to employees by the largest healthcare corporation in Pennsylvania was a common theme among many of the striking workers.

A worker from the 2012 campaign described her decision to fight for a union:

“I have coworkers who have children and health problems, and I watch them struggle to make ends meet in this physically demanding job. Full-time workers should be able to support families, but we can’t do that here.”

“Healthcare as a field has a responsibility to take care of people—patients, community, and workers—and even though UPMC does a lot of things right, I believe it has lost sight of the original intent of the hospitals. It has become too focused on profits over patients and workers.”

The speakers, including UPMC workers, local labor unions and elected officials, demanded a minimum wage of $20/hr, safe staffing, elimination of medical debt, and the right to form a union without interference for all workers risking their lives to provide medical care to others during the pandemic.

Many workers described how the hospital actually cut many positions throughout the pandemic, to the point where employees were performing the tasks of multiple job titles. One financial advisor described having to administer vaccinations and IVs routinely — activities that were not listed in their job title. Many employees described being forced to work mandatory overtime and feeling exhausted and overworked every single day.

Despite making billions of dollars in megaprofits each year, UPMC is currently listed as a “nonprofit.” This means the massive conglomerate, despite owning some of the most highly valued land in Allegheny County, pays no taxes. This point was on the mind of many of the underpaid workers at the rally.

During the rally, workers attempted to deliver a petition signed by community members in support of a union to executives at the UPMC headquarters. The crowd roared: “UPMC! You are not a charity! You’re greedy!” The workers were turned away at the door of the UPMC building by a phalanx of police officers.

Workers around Pittsburgh recognize the significance of the fight to unionize UPMC — it is the biggest employer, the biggest landowner, and makes huge profits every year on the backs of working people. A union at UPMC would mean a major victory for the health and livelihood of workers across the city.

‘We are fighting for respect,’ say Montreal hotel strikers

Philippines: Ka Oris was murdered by AFP on his way to medical…