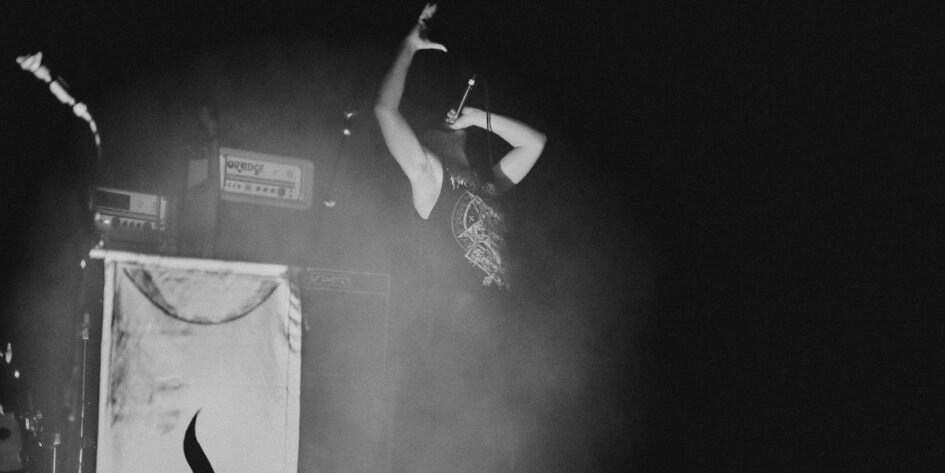 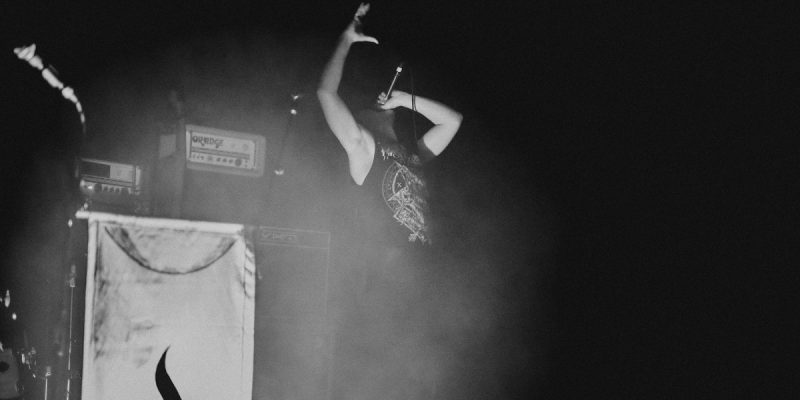 If horror is marked by a fascination with the dangerous and the macabre, then few forms of music embody that spirit like black metal – a controversial subgenre of heavy metal characterised by a raw, uncompromising playing style and morbid aesthetic. The genre emerged in the 1980s but gained notoriety in the early 1990s when its Norwegian scene became embroiled in church burnings and murder. Black metal scenes globally have evolved and diversified, but headline-grabbing associations with white supremacists remain – as with other ‘extreme’ music genres, black metal festivals are used by far-right groups as key networking events.

A growing movement is now fighting back to reclaim the genre. Gerry Hart spoke with Simon Barr from the proudly anarchist, anti-fascist band Dawn Ray’d about the genre’s potential transformation.

Gerry Hart: How did the band meet, and what originally drew you to black metal?

Simon Barr: Me and Fabian used to play in a band called We Came Out Like Tigers – we met in 2008 through protest and DIY music in Liverpool. We toured with Matt’s band Black Mass in 2013 and then he filled in drums for a couple of tours for WCOLT. That band came to a natural end and we had already talked about doing a black metal band, so we got going with Dawn Ray’d immediately. We actually played a few shows as Dawn Ray’d that were originally booked as We Came Out Like Tigers.

We were playing a pretty harsh form of screamo already, which led me to get into darker and darker music, so naturally found black metal. I think [the band] Wolves in The Throne Room was a big influence on us at the time, and a lot of other people at that time, I guess.

GH: Many prominent black metal bands have been documented as having far-right and racist views. How do you think the far right established a presence within black metal?

SB: They do it the same way in every scene. The far right long ago realised the importance of the culture war. Punk and Oi used aesthetics of authoritarianism and nazism, and the organized far right quickly seized upon it. The exact same thing happened in black metal. A few teenagers in Norway used swastikas to come across as controversial and were then preyed upon by actual nazis.

But just as the boneheads were dealt with in punk, in Oi, in ska, in techno, in folk music, so will the dickheads in this scene be ousted as well.

GH: You explicitly identify as anarchists. How does black metal relate to your politics? And have you faced any backlash for your politics?

SB: I guess it’s not a scene traditionally considered anarchist, but the ideas of revolution, wildness, freedom, hatred of authority all make sense to me within the context of black metal. The way I see it is, if black metal wasn’t compatible with anarchism, it is now! Ha!

Black metal lends itself so well to anarchism

Yeah, people hate us for this. Nazis complain so much about us in social media comment sections, but we are really good at deleting anything right wing, which is always satisfying. They never actually dare say anything to us at shows though. Also, we have had unbelievable support for the things we say – we talk about these ideas at every show we play, we have done loads of big fundraisers, we try to be as vocal as we are able to be and people seem to appreciate that. Any hate we get is overwhelmingly overshadowed by the support we get.

GH: In recent years, a number of black metal acts like yourselves – alongside bands like Neckbeard Deathcamp, Feminazgul and Bull of Apis Bull of Bronze – have been actively pushing anti-capitalist politics and challenging the far right. Do you think this is a sign of things changing in the genre?

SB: Yes, definitely. Bands like Panopticon and Iskra paved the way, and this feels like a new wave in which we can make further inroads into the genre.

Also, it is a sign of the times. We live in desperate times and are facing a terrifying future, and it has never been clearer that no politician is ever able to fix anything, and that the only people we can ever trust are ourselves and our own communities. I think there is a hunger for revolution in every part of life, including music.

Black metal lends itself so well to anarchism. I hate the church, I hate white Christian civility. I hate the crimes of the Catholic empire, I shed no tears when those buildings burn down. The right wing in metal actually upholds white Christian values, which feels more separated from black metal than us anarchists.

GH: Your latest EP, Wild Fire, explicitly calls out those artists who use the language and iconography of fascism in their music, even while they deny having fascist sympathies themselves. What prompted you to take that approach?

SB: Honestly, I have to write a lot of songs for this band and I never want to repeat myself. I like finding new angles to discuss these ideas. It blows my mind how quick the nazis are to deny things they previously said. They buckle so easily! And yet they still have the audacity to criticise bands like us, who are bold, clear and consistent in everything we believe! They are such cowards and have so little conviction. It felt like an easy criticism they will struggle to deny.

GH: Do you think it’s possible to fully purge black metal of its fascist elements? What do you envisage a politically active, left-wing black metal scene looking like?

SB: I think fascist music is also linked into fascism in the wider world, so until we destroy it all we will continue to see elements of it in music scenes. Already it has had to massively retreat, the explicitly nazi bands now regularly have shows cancelled and attacked, so we are already making amazing progress.

I think these scenes are an amazing place to meet people, make connections and organise, and can look like so many different things. Diversity and adaptation are our greatest weapons. This scene can look however we want, and like a lot of different things all at once!

GH: What advice do you have for someone interested in exploring black metal, or a fan who wants to avoid bands with far-right sympathies?

SB: There are a number of Facebook groups where people discuss whether bands are right wing or not, and a quick internet search will often clear it up. It’s worth remembering that nazis are the minority. Most bands, and most people, aren’t nazis.

Also, this scene is still in its infancy, so if you want there to be more political bands, start one! My only advice on that is, make sure you are using your band to further liberation, not using liberation to further your band. The more of us that are talking about this the better and the safer it is for all of us.

When we first posted a picture of us with an Antifascist Action Flag, nazis lost their minds. It seemed really controversial as no one had done it in this scene back in 2015, but all of a sudden it is way more widely accepted, and since the beautiful people in Neckbeard Deathcamp came along, we got half the amount of hate, as we shared the load together. So the more of us there, the better this scene will be.

This article first appeared in issue #233 ‘Democracy on the Wing’. Subscribe today to get your copy and support fearless, independent media

The fierce kindness of Dawn Foster

Stagflation: a demand or supply side story?