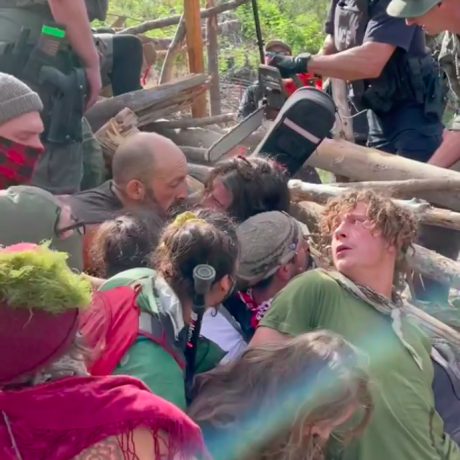 The police in so-called Canada are once again turning to violence to maintain the legitimacy of the exploitative, capitalist state. A state that says homelessness is the fault of individuals, and poverty is a normal part of life. A state that says trees can be replanted but ignores Indigenous wisdom that knows the ecosystems old growth trees provide are irreplaceable. The old growth is a critical carbon sink that new trees simply cannot equate to for a significant number of years of growth. We know this old way of operating is not compatible with the world we live in today. Yet, the state continues to utilize the police to maintain this status quo. After all, it’s what they were created for; since their inception, the police and the RCMP have been used to protect the state.

In video footage taken at the blockades, police and members of the RCMP are shown pepper spraying, macing, pushing, grabbing, throwing to the ground, dragging and assaulting non-violent Indigenous defenders and allies. There is no evidence of old growth protectors fighting back or resisting, even in self-defence. Most stood in place and were attacked for it. Many officers refused to give their name or badge numbers and had thin blue lines across their badges which have been banned since October 2020. Journalists have been excluded from entering and capturing events since the standoffs at Fairy Creek began. There have been reports police have been stealing and erasing footage when illegally arresting journalists and legal observers. There have been reports of sexual assault by women on the front lines. Arbitrary exclusion zones, declared illegal by the provincial supreme court, have been and are still being used. Officers are shown in a video posted by @siiamhamilton with a chainsaw cutting trees people tied themselves to. The saw is shown coming dangerously close to a person’s head, and many people’s arms lay directly beneath the saw. These scenes largely mirror the events that took place during the encampment evictions in Toronto. Many of the same violent tactics were utilized.

We do not yet know the severity of, or how many, injuries were obtained from the police violence at river camp. Judging by existing footage circulating on social media, we can likely expect concussions, cuts requiring stitches, potentially broken bones, lots of eyes burned from pepper spray and bruising. There have been reports an Indigenous woman had some of their hair ripped out while they were being dragged by an officer. We can also expect very few, if any, cases where defenders or allies inflicted violence on police.

Recall at the last eviction raid in Toronto at Lamport stadium, a broken wrist and nose were reported, as well as cuts needing stitches, sprained ankles, bruising, concussions and eyes burned from police violence.  Only one officer was injured; he pepper sprayed himself. Regardless of what one deems is an “acceptable” form of protest, it is clear where the violence is coming from. In the videos released by @camplandback, the same non-violent strategy used by encampment defenders in Toronto is used by old growth defenders, a human chain. People link arms and stand their ground. This shouldn’t warrant violence. Who does police-instigated violence serve and protect? Why is this acceptable, and who does it benefit?

Destruction of the old growth directly impacts the Pacheedaht Nation gravely. They, along with other Indigenous Nations are practicing ceremonies and are doing everything in their power to protect the sacred old growth trees being stolen from the land. Their ceremonies are non-violent in nature, and they have been met countless times with police violence. In Toronto, a fire ceremony being held in front of the Trinity Bellwoods encampments was interrupted and stomped on by police. Indigenous Peoples continue to face violence for their Indigeneity and for practicing their inherent rights as Peoples Indigenous to the land.

The Black Gate was the site of the Red Dress ceremony, where a display of red dresses hung from stakes along the side of the mountain near the Fairy Creek blockades. Jaime Black, the artist who initiated the project, explained “The REDress Project calls in the spiritual power and presence of our ancestors, as well as the spirits of those who have gone missing or been murdered. The REDresses stand with us as we reclaim our circles, reclaim our voices and re-imagine what it means to move forward in a good way.” The site, which honours MMIWGT2S+ across Turtle Island, was torn down by members of the RCMP. The RCMP, of course, are directly linked to the MMIQGT2S+ crisis.

From Tkaronto to Fairy Creek, the same patterns of police violence are used to uphold the status quo and favour capitalist, colonial, white-supremacist interests. Arguably, it’s getting worse. More frequent, and more prominent. However, the need for greater force tells us the movement for liberation is gaining traction. Tension is escalating. Our power is escalating.

We can build systems of accountability that centre care for both “victims” and “perpetrators.” We don’t need our society to be built around individual obedience, especially when abiding doesn’t serve even our own interests, and disproportionately punishes certain groups. We can imagine and create better. We have to.

You can’t police your way out of a pandemic