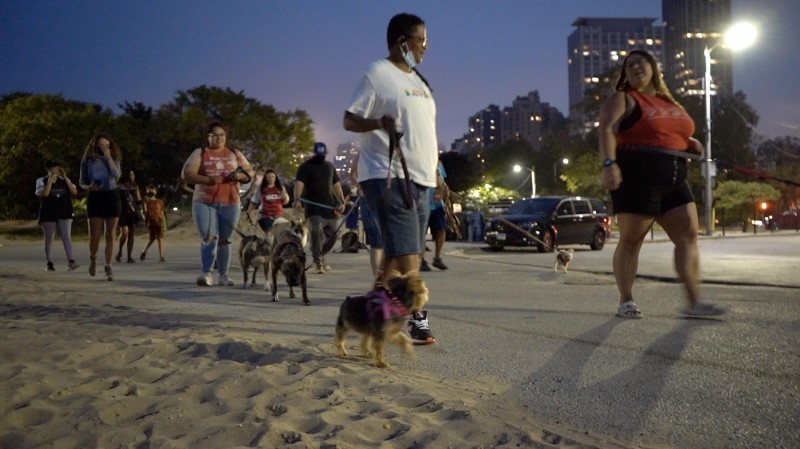 Chicago protest against police beating of Clack women who was walking her dog.
(Hankyeol Song)

Chicago, IL – On Sunday evening, September 12, a group of concerned Chicagoans and their dogs gathered at North Avenue Beach for a Pooch Walk to reclaim the space where a Chicago Police Department (CPD) officer attacked African American woman Nikkita Brown while she was walking her dog on August 28 at 12:12 a.m.

The cop, who has had 24 misconduct allegations against him, approached Brown under the pretense of her being in the park after it closed, despite there being several white people still present in the park. When she began to film him, the officer moved toward her. She asked him to keep a social distance, which he refused, then as Brown was walking away, he grabbed her, knocking her phone out of her hands and her shoes off her feet. Ms. Brown stood firm and remained upright, despite the officer’s attempts to wrestle her to the ground.

Brown decided to pursue disciplinary action and charges against the officer involved, helping bring light to the violence against women perpetrated by CPD, an aspect of the police terror plaguing Black and other nationally oppressed communities.

Sunday’s action was organized by the Women’s All Points Bulletin (WAPB) and co-sponsored by the Chicago Alliance Against Racist and Political Repression (CAARPR), Justice for Families, and the 411 Movement for Pierre Loury.

Brown and her loved ones came to join the crowd of more than 20 people and their dogs, which included several survivors of police sexual violence and their supporters.

Trina Townsend, a board member of WAPB, and a survivor of sexual assault by CPD stated, “We as survivors, we all feel when another sister goes through a traumatic experience like that. How can I heal if things like this keep happening? I’m here to support Nikkita and all women, especially all Black and brown women. We have to be able to feel safe, to be able to walk anywhere without the fear of the police doing something to us. I support Nikkita all the way.”

Crista Noel, a founder of WAPB, put the situation in the context of the police’s pattern of abuse against women, saying, “We have Miracle Boyd that the CPD popped in her mouth and broke her teeth. We have Mia Wright where they snatched her out of the car and put a knee on her neck at the Brickyard Mall. We’ve got Alexis Wilson that was shot to death by some cops over a bad order at Baba’s restaurant. We just have too many occurrences that are happening against women and it’s like a run by the police on women. And we want this to stop.”

The WAPB listed out the demands of the action in a press statement: “We demand that the City of Chicago quickly resolve the lawsuits in the Anjanette Young case and the Nikkita Brown case, as well as quickly investigate and terminate police involved in these incidents and others under their purview. Additionally, we demand that Cook County consider an Oversight Agency for incidents of police violence outside of the city but within its borders, as well as a State agency to escalate complaints to and for review, investigation, and auditing.”

The officer who attacked Ms. Brown has been placed on administrative duties, pending an investigation by the Civilian Office of Police Accountability (COPA). Individuals and organizations have been gathering outside of COPA headquarters since the incident went public on September 1 to pressure COPA to act swiftly and decisively to strip this predatory cop of his police powers and charge him with assault. The WAPB and CAARPR are mobilizing people to participate in public comment at the upcoming police board meeting on Thursday, September 23 at 7 p.m.

Another survivor of CPD violence, Erica Kadel, said that the assault of Nikkita Brown “can’t go without a response, not only in the form of the courts convicting the cop who assaulted this woman and her dog. But also, the response of the community in support of Ms. Brown and making sure that we’re showing her and showing other people that we can make spaces safe for each other.” The Pooch Walk showed that communities across Chicago are ready to stand with Ms. Brown as she seeks justice and accountability.

COPA, the superintendent, and the Police Board are all part of the unjust police accountability system in Chicago. The Empowering Communities for Public Safety (ECPS) ordinance that the movement against police crimes in Chicago fought to pass, is designed to change the power relations of this system. When ECPS is fully implemented, those targeted by police terror, like Brown, will have a structure through which to seek justice in the form of local district councils and a city-wide Community Commission for Public Safety and Accountability. The Community Commission for Public Safety and Accountability is a citywide commission nominated by locally-elected District Council members in each police district with the power to hire and fire the head of COPA and review its operations.

The Community Commission will also have the power to review and oversee the operations of the superintendent and Police Board, the bodies with the power to fire CPD officers. The movement is also fighting to pass an ordinance that will get a referendum on the ballot to increase the powers of this commission. These expanded powers would include the ability to hire and fire the superintendent and members of the Police Board. The WAPB expressed support for the ECPS referendum in a press statement.