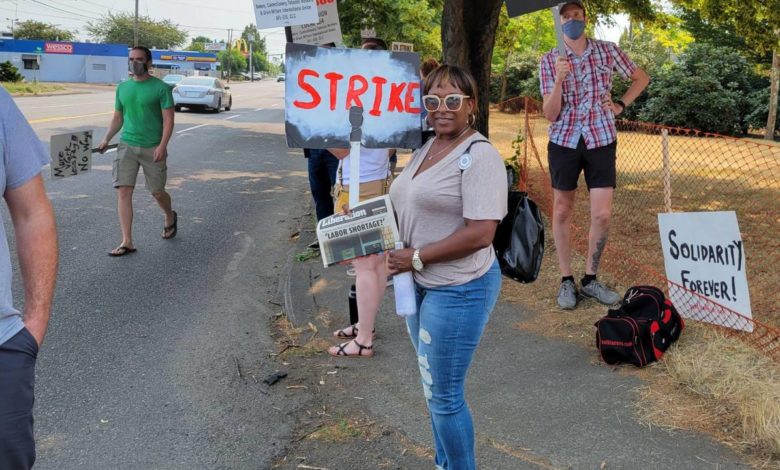 Two hundred Nabisco employees at the North Portland bakery went on strike on August 10. On August 14, Bakery, Confectionery, Tobacco Workers and Grain Millers Local 364 and other supportive unions and organizations held a community rally where speakers led chants and discussed the workers’ concerns. The top concerns are the constant threat of jobs/bakeries being outsourced to Mexico, management’s attempts to enforce an “alternative” workweek, and changes to employee healthcare plans.

LaJuana Hall, Local 364 shop steward at the North Portland facility, told Liberation News: “This is a good job, we like what we do and we like working together, but management makes it a bad job, you know? If the head isn’t good, the body isn’t good either.”

Hall said that the strike is hard for everyone: “Everyone is strapped but if we don’t do it now, nothing down the road will be any better.”

She explained the issue of Nabisco requiring weekends as part of “straight” time instead of time-and-a-half, which is how weekend work is currently compensated, and said, “Basically they want to find a way to stop paying us overtime.”

Hall said Nabisco-Mondelez made “record profits” last year, and she and her coworkers “haven’t stopped working at all” since they were deemed “essential workers” during the pandemic. When asked what those profits mean for her and her coworkers, she shook her head and said, “All we ask is that they show some humanity for the people who made them a billion dollar company.”

Nabisco, which is owned by confectionery conglomerate Mondelez International, recorded $26.6 billion in revenue in 2020, a 2.6% increase attributable to a “snack boom” during the pandemic. In the last year, Nabisco has shut down at least two major U.S. facilities, one in Georgia and another in New Jersey, and sent those jobs to Mexico. Mexican Nabisco workers are often paid $1/day and their only benefit is “a bus ride to work,” according to a BCTGM  Local 114 member who attended the rally.

Local 364 members have reported that management has tried to argue that the benefits they receive in the U.S. are only possible because Mexican workers are paid so little. That is to say, Nabisco, a multi-billion dollar international corporation, cannot “afford” to pay both U.S. and Mexican workers a fair living wage and provide basic benefits to both. But Local 364 members and their supporters rejected that logic at the rally. One speaker at the rally said, “Nobody here is asking for Mexican workers to be exploited.” A BCTGM Local 114 member told Liberation News that BCTGM International has been running radio advertisements in Mexico to “educate and agitate” for Nabisco workers to unionize and strike for higher wages and better benefits.

Union members from BCTGM Locals 364 and 114 both echoed the sentiment that “all for one, one for all” is the only way to keep companies from taking benefits away from workers. When asked about the significance of non-union community support for their strike, one member said, “It’s huge. We wouldn’t even be able to park our cars up here if people weren’t supportive of our strike.” He also said that, “the trend seems to be that people are looking at unions more favorably” and that everyone knows “Nabisco isn’t hurting.” LaJuana Hall from Local 364 said that she didn’t know how long the strike at this facility would last, but the union won’t back down.

For Trumka, it was always “workers first”