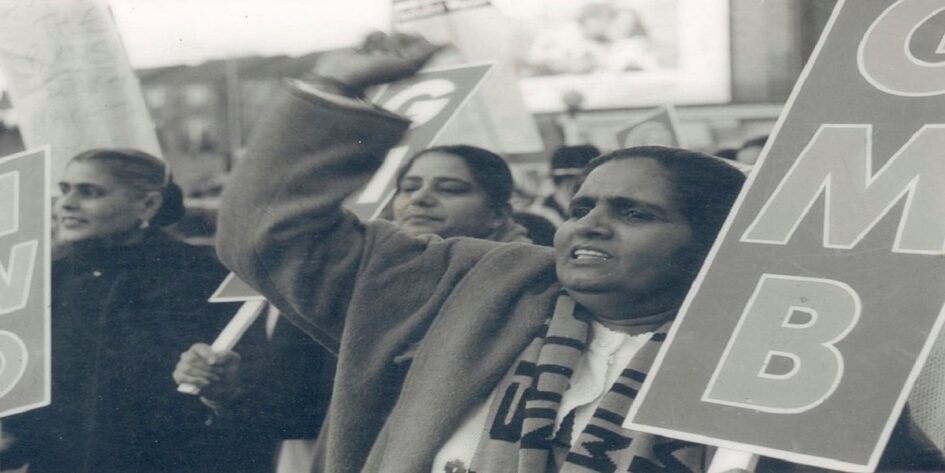 July 8, 2021 – From Red Pepper
288 views
Surinder Bassi and other strikers on a march through Smethwick, 1992. Photo: Inqilab magazine

The workers involved in the 1992-3 Burnsall strike, which took place at a small car part factory in Birmingham, gained national support in their fight for union recognition, equal pay, health and safety improvements and an end to compulsory overtime. Activist Sarbjit Johal told Red Pepper about her experiences of supporting the strike, and its enduring relevance today.

After hearing of the strike, a group of us held a meeting with two of the strikers – shop steward Darshan Kaur, and Surinder Bassi. Surinder always challenged the racist management and police. We co-founded the Burnsall Strikers Support Group London. As I spoke Punjabi, I became their translator.

Becoming involved with the strike helped me cope with the fact that my dad, who I was very close to, was seriously ill at the time. I knew he had also experienced racism as a factory worker on first coming to Britain. This made the strike especially personal for me.

We produced a leaflet publicising the strike (which was translated into South Asian languages), organised for the shop stewards to speak at meetings, raised funds and organised a supporters’ minibus to go to the picket line every Friday. New support groups sprung up around the country.

The GMB, the strikers’ union, didn’t offer them much support. They produced no leaflet – and nothing in Punjabi – or any strategy for winning the strike. Even when the police refused to let the strikers have an outdoor heater in the freezing winter, the union officials told them to stop making a fuss. They were reluctant to pay for the strikers to go and speak at events. To every suggestion the union would say: it’s too difficult, you’re being unreasonable, be patient. They treated the strikers like children and the support group like outsiders.

The union officials called off the strike in July 1993 and tried to justify it through racist stereotypes, claiming they were protecting some of the women from violent husbands. They’d threatened to expel the workers if they continued working with the support groups. They were afraid of having their funds sequestered for secondary picketing, although our activities were not illegal.

Standing on the picket line, we would shout ‘GMB Zindabad [long live GMB]!’, and ‘Shameless Jimmy [O’Neil, factory owner], we are not scared of you!’ The support was vast – women’s groups, including Women Against Pit Closures, community activists, school students. On the journeys between London and Birmingham we would sing songs and we all became very close. Once, we stopped at my relatives’ house in Handsworth. They had seen me on the local news, speaking at the picket line. Their faces were full of pride. This was a big change as I had always been a ‘bad daughter’ by their traditional Asian standards.

We had a national rally in 1993. People came from all over with their banners. The police made us stand on a hill. The factory looked so small and the atmosphere was very hopeful.

I also remember our London fundraiser – the strikers arriving, all dressed up. We had bhangra songs, Linton Kwesi Johnson and Billy Bragg. Surinder made this amazing speech. I remember her saying, ‘We saw bosses going past with their heads down – they have never done that before’. Everyone was on a high.

In today’s gig economy, many BAME workers on zero-hour contracts are even more precarious than the Burnsall workers. Burnsall is an inspiring example of how precarious workers’ strikes can be strengthened by community support.

A film about the Burnsall Strike, Women of 10 Downing Street, is available on YouTube. This article originally appeared in Issue #230, ‘Struggles for Truth’, published December 2020. Subscribe to grab your copy!