Pressure for a fightback building in three health workers’ unions 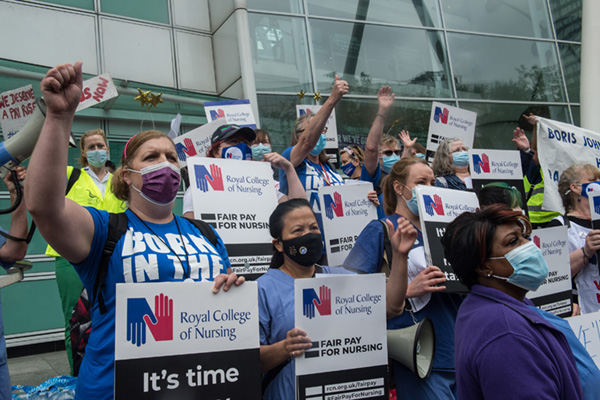 The GMB union is preparing to ballot thousands of health workers across England as part of the fight over NHS pay.

The union, which organises many ambulance staff and others, is demanding a 15 percent rise. The government has imposed just 3 percent.

The union’s strike ballot will open on 10 November and close on 15 December. Any strikes would take place in the new year.

They said the union should link that fight with others over the growing crisis in the NHS.

“People are at their wits’ end. Something needs to happen to say the health service cannot be run down the way it is now. This strike vote is a great opportunity to do that.”

GMB members in Wales are set to vote on a new pay offer from the Welsh government.

The enhanced package includes an extra 1 percent pay rise—but is not consolidated. That means it won’t apply in the following years.

That falls far below the union’s demand and members should reject it massively.

The nurses’ RCN union is next week set to launch a consultative ballot on industrial action over pay.

A massive 92 percent of those who voted in England said the award is unacceptable. An even higher percentage said no in Wales.

The new ballot will ask nurses whether they are prepared to take industrial action to win a better deal.

The union has been fighting for a minimum 12.5 percent increase.

This is to reflect the way nurses’ pay has fallen in the last ten years—while the RPI inflation rate now stands at 4.9 percent.

Some nurses have already reported that the paltry pay rise was enough to push them into having to pay higher pension contributions.

That means that they are now likely poorer after the pay rise than they were before.

Consistently low pay in the NHS is driving huge staff shortages and means that many wards are permanently understaffed.

The resulting stress is driving workers out of the NHS, and it putting patients in danger.RCN leaders say they will look at the results of the ballot before deciding their next move.

But members have already expressed their anger and the union risks dissipating the strong feeling for action revealed by the first ballot.

Activists should throw everything at winning a big vote for strikes to keep pressuring union leaders—and to encourage workers in other unions.

GPs are threatening industrial action in protest at government attempts force them to see all patients that request a “face to face” appointment.

The Tories’ plan includes “naming and shaming” surgeries that see too few patients in person.

The British Medical Association’s GPs’ committee voted unanimously last week to reject it. “GPs have been left with no alternative but to take this action,” said Dr Richard Vautrey, chair of the GPs’ committee.

“All efforts to persuade the government to introduce a workable plan that will bring immediate and longer‑term improvement for doctors and their patients have so far come to nought,”

It is not certain that GPs will hold a ballot because the BMA’s ruling council has to agree. But the huge anger among local doctors is reflected among many leaders.

A strong yes vote in any consultative ballot could lead to a formal vote.

Action may include refusal to cooperate with ministers’ instructions and other measures designed to reduce workload.