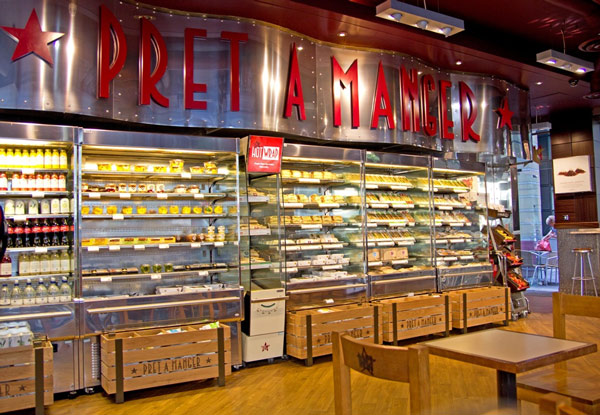 Workers at Pret A Manger may go on strike (Pic: Wikimedia CreativeCommons)

The Tories have underlined how they are going to keep attacking workers’ living standards. And bosses are following them with new attacks as people return to workplaces and furlough ends.

Chancellor Rishi Sunak confirmed on Thursday that the Universal Credit (UC) benefit will be cut by £20 a week at the end of September. He said, “That temporary uplift was indeed temporary it was the right intervention for that particular part of the crisis that we’ve experienced.

“But now as the economy is reopening and businesses are hiring again, the right thing to do is to help people find really well paid jobs.”

He ignores that 40 percent of people on UC—over two million people—are in work. But they are so low paid that they qualify for benefits.

The government is also cutting working tax credit, which was similarly raised by £20 per week in early 2020.

Analysis by the Joseph Rowntree Foundation shows the majority of families that lose out will be working families.

These cuts are likely to worsen already appalling levels of poverty.

Just before the pandemic hit, poverty was at a record high, with 14.5 million people living in it.

The majority of these—57 percent, or 8.3 million people—were in working households.

As the TUC union federation says, “The idea that work is a guaranteed route out of poverty is simply not true.”

Meanwhile, some bosses are using the pandemic to impose permanent pay cuts. This is despite much talk that shortages of workers are driving up pay.

Pret A Manger workers may go on strike after the company told them their pandemic “emergency” pay cuts were being made permanent.

Workers communicated on an anonymous social media account to voice their concerns. They have now received the backing of the Bfawu union.

The vast majority of Pret workers are paid the pittance of £8.91 an hour, the basic minimum wage. They were told that they would temporarily not be paid for breaks and that a service bonus would be axed in July last year.

But bosses have now told workers that the cut to pay for breaks is permanent.

The service bonus was reinstated in April this year at 50p an hour, down from £1 before the pandemic struck.

Workers have been told that change is also permanent.

The combined changes for a worker on an eight-hour shift, who regularly gets a mystery shopper bonus, amount to an 11 percent pay cut per shift. This is compared to pre-pandemic levels.

Pret is owned by the giant multinational JAB Holding Company. It also has a major stake in JDE, which has recently pushed through its own vicious fire and rehire attack on workers.

Bfawu has backed the workers. Real struggle will be needed, in both the public and private sectors, to stop the attacks on wages and benefits.

As Financial Times newspaper columnist Sarah O’Connor said, “Maybe Pret has misjudged a very tight labour market and will have to reverse course. But I think this is a reminder that many businesses have got very used to not raising wages and won’t change course readily.”

Indeed they won’t. The trade union leaders have to organise resistance.

Ian Hodson, national Bfawu president, said, “We call on Pret to think again. We can no longer sit back and allow these companies to boost their profits from workers’ wages.”

Those words need to be turned into action.