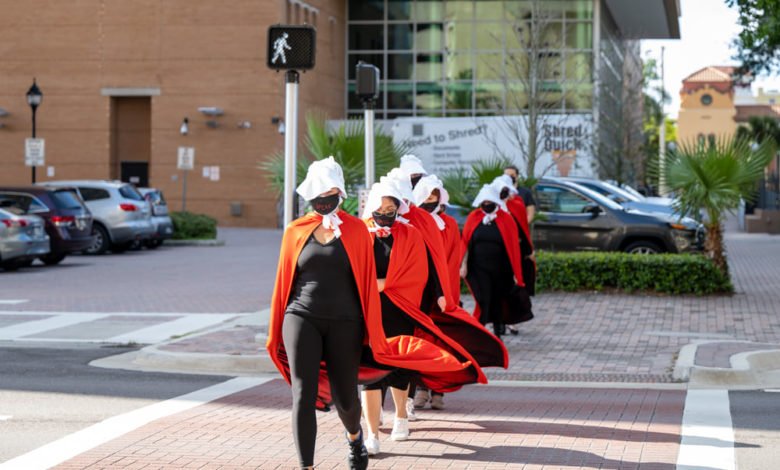 On the morning of Sept. 14, activists gathered outside of the Manatee County Commission chambers to protest a county commission meeting which would discuss potential abortion restrictions similar to the Texas Heartbeat bill, which ban abortions as early as six weeks into a pregnancy. The protest was organized by Manasota Black Lives Matter Alliance, Pasco BLM and Women’s Voices of Southwest Florida.

Fifteen to 20 activists prepared to make public comments and arrived at the chambers at 8:00 am. Ten of the activists were dressed in outfits inspired by The Handmaid’s Tale, a novel, film and now TV series about a fundamentalist regime that treats women as property of the state.

Tampa Bay PSL member Jack Wallace was waiting inside to give public comment when he heard a commotion outside of the chambers. Wallace reported: “The police shoved someone to the ground and arrested them.”

Kimberly Cox had been outside live streaming for three hours. Towards the end of the stream, Cox is seen asking Sergeant John Neri why another person was trespassed from the chamber. Neri did not answer, which then prompted Cox to ask for Neri’s name and badge number. “I’m going to have to ask you to step away,” Neri said while grabbing her.

Multiple officers surrounded her, and she was then shoved to the ground and arrested, as shown in the live stream. Wallace and the other activists then ran outside, chanting “Shame! Shame! What are the charges, officer?” and “Who do you protect? Who do you serve?”

Cox was taken to the Manatee County Judicial Center where activists followed to protest the arrest. PSL members Ruth Beltran and Jimi DePriest entered the building to find out more information, where they were bombarded by at least 20 officers who threatened to arrest them. This was another example of Florida police officers abusing their power and brutalizing people with impunity.

Cox’s husband, Mark, was forced to pay $60 just to speak with her for one minute. “She does not belong in jail, she did nothing wrong,” he said in an interview with Liberation News while waiting for her release.

A handful of supporters joined Cox’s husband at Port Manatee, the Manatee County Jail, in awaiting Cox’s release. Cynthia Muscat, a close friend of Cox, called the jail at around midnight. They told Muscat that there had been a clerical error and that Cox would have to stay overnight until the manager came in. The jail had charged Mark $500 for one of the bail amounts, but it was supposed to be only $120. Activists continued to call the jail, and continued to get the runaround from each department.

Hours later, activists were still waiting outside of the jail, demanding answers on why the release was taking so long. Sergeant Michelle Smith grew angry on the phone, even claiming that “what we do in here is none of [the public’s] business.” Supporters continued calling, and finally Cox was released at 4:07 am.

Cox is facing three separate charges for the incident. Resisting arrest with violence, trespassing and disturbing a school or religious event. These charges can carry up to two years behind bars. All of these charges are completely fraudulent. She was shoved around by the police, she had no trespass warning and this council meeting was neither a school nor religious event.