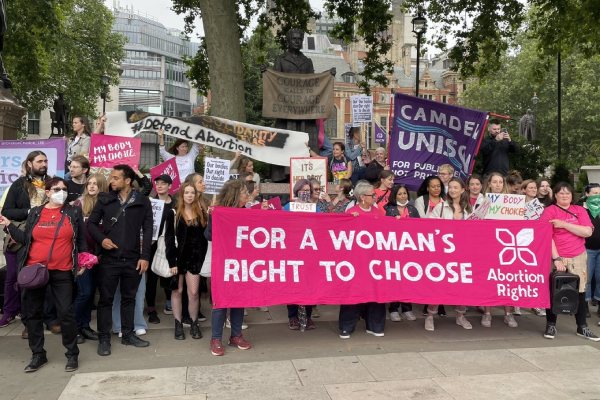 Around 40 militant protesters attended the Abortion Rights campaign’s rally to demand safe, free and legal access to abortion for women in Britain. And they stood in solidarity with the attacks on women in Texas, US, after laws went through preventing abortion after six weeks.

“The pro-lifers just want to control women,” she said. “Life would be so much more difficult for women if abortion access was restricted.”

Another protester, Robin, added that its “outrageous people are marching against human rights”.

“We need more people here with us,” she said. “We want freedom and to not be made to feel ashamed. It’s so annoying because abortion has always existed and restrictions and bans don’t make it go away—it just stops it being safe.”

The overwhelming majority of people support a woman’s right to choose. A recent YouGove poll in July found 85 percent are in favour.

The March for Life UK—a campaign that began in the US—is an annual day out for bigots. This year it consisted of English flags, the Catholic Church, other religious figures and anti-vaxxers.

Abortion Rights campaigners said it attracted around 2,500 people, the smallest number in years.

As the bigots marched around Parliament Square, they were met with loud cries of, “My body, my choice,” from the pro-choice protesters.

Others chanted, “Get your rosaries off my ovaries,” “Not the church, not the state, women must decide their fate,” and, “Pro life? That’s a lie. You don’t care if women die.”

Alisa works for Abortion Rights. She told Socialist Worker, “Although we don’t have the same numbers today, nine out of ten people in Britain are pro-choice. So we represent the majority.

“March For Life say they’re family friendly, but they have links with extremists, fascists and nationalists.

“Where the right rise, whether here, in Northern Ireland or across Europe, reproductive rights come under attack.

“These are people who don’t want others to access benefits to support their children.”

Liz spoke about the 80,000-strong TUC union federation march in 1979, organised to stop attacks on abortions laws in Britain. “For working class women abortion is not always an option,” she explained.

“That’s why it matters that unions are here.”

Vicki Blake from UCU also highlighted the role of trade unions in the fight for abortion rights. “We can’t go back to knitting needles in the back streets,” she said.

“Abortions are health care. Trade unions need to do more to bring people along to protests and educate people more.

“We have to stand up and fight or we’ll see more rolling back of our rights.”

Other speakers highlighted that abortion is still criminalised in Britain after 24 weeks of pregnancy.

Sonia Adesera, a doctor and abortion activist, spoke about the lack of access for migrant women. She called for changes to the welfare and healthcare system.

“Rights we’ve fought for centuries to control our bodies are being taken away across the world,” Sonia said.

“The law still criminalises women who have abortions without consent needed.

“Low income, migrants, women of colour and women in relationships with domestic violence who can’t reach clinics are affected the worst.

“Their lives are put at risk.

“We’re here not just to defend the rights we have, but to fight for more.”

Protester Abi told Socialist Worker that more support needs to be in place to help women who need abortions.

“We need more visibility for these problems and remove the stigma for women who have and support abortions.

“We have to continue to protest.”

Afterwards, Abortion Rights activists went to the US embassy to protest against the rolling back of women’s rights in Texas.

Abortion Rights is calling national protests in London, Belfast and Edinburgh on 2 October in solidarity with the Women’s March taking place across the US. Go to https://abortionrights.org.uk/ for more details