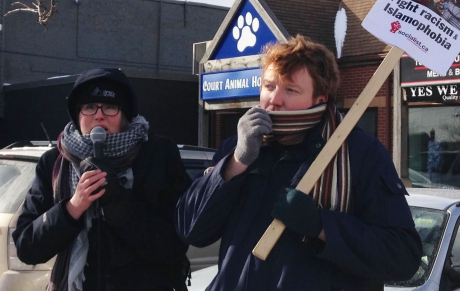 St. Catharines city councillor Karrie Porter was awakened at 3:00 AM, January 30, when a cowardly vandal hurled a large rock through her living room window.

The attack was doubtless deliberately timed to coincide with the right-wing “Truckers for Freedom” protests in Ottawa. It is the second time in just over a month that her home has been attacked. Just before Christmas, anti-vaxx creeps painted hateful slogans and swastikas on her home, and protested at that of Niagara Region Chief Medical Officer Dr. Mustafa Hirji.

Porter was defiant. She tweeted: “Good day to all except the guy who threw a rock through our front window. Look bud, I know the snow removal has been SUPER frustrating but there’s a less shitty way to vent to your Councillor! It’s the snow, right? Not the video I posted of Cap’t Von Trapp ripping the Nazi flag?”

She has a long track record organizing against racism and white supremacy in the Niagara area, both as an individual and as an elected representative. In 2018, she MC’d a rally against the racist Northern Guard, who threatened to attack the area MP. In 2017 she was front and centre at a rally against Islamophobia and racist attacks.

Porter is not the only person to face attacks on their person and property in the wake of the convoy.

All along the route, convoy participants went out of their way to harass and attack retail workers who tried to observe local health requirements. It got so bad both Tim Horton’s and Petrocan outlets denied them service.

Indigenous people and racialized people, especially on the prairies, reported that they were laying low until the convoy’s dust settled. In Ottawa, one man reports he was repeatedly called a racial slur because he refused to honk his car horn. He tweeted: “Interestingly, I wasn’t phased by it. Sad, isn’t it?”

The Truckers for Freedom protest fell far short of the goals it set for itself – more than a thousand vehicles, mostly pick-up trucks and SUVs, rather than the 50,000 big rigs promised; fewer than 10,000 protesters instead of the 1 million predicted.

And QAnon-inspired dreams about attacking parliament and overthrowing the governments boiled down to snarling traffic and harassing staff at local hotels and stores.

But you can bet far-right organizers will walk away patting themselves on the back, claiming success.

Polling reveals that about 30% of the population sympathized with the protest. Those polls were conducted before protesters descended on Ottawa, and before the racist, homophobic, mysogynist and simply delusional content of the rally was exposed. The closer they got to Ottawa, the more confident protest leaders, like Ontario organizer and spokesperson Jason Lafaci, were to reveal their real agenda and their ties to white supremacist organizations like Sons of Odin.

After some of the protesters’ behaviour in Ottawa, those poll numbers will come down. Vandalizing a Terry Fox statue, parking and urinating on the War Memorial, storming a homeless shelter and demanding meals intended for the unhoused, forcing the city’s biggest retail mall to shut down by launching a maskless shop-in – none of these is a good look.

Neither is the number of swastika and confederate flags in the crowd. Worst of all, a memorial marking the 5th anniversary of the murder of six Canadians in their Quebec City Mosque, at the hands of a white supremacist terrorist, had to be canceled. Organizers said they were receiving threats of violence.

But still, a significant number of people support the protest in spite of, or more likely because of the extremist content. The convoy and rally was an opportunity for right-wing organizers to gather new supporters and most of all raise funds. We should all be worried by this.

Trucker convoy a farce – but no joke

Progressive taxation for our times