Propaganda movie? It all depends on the country

Western media like the BBC call the Chinese movie The Battle at Lake Changjin “propaganda” while unironically mentioning James Bond and Marvel movies. They don’t mention the line-by-line veto power the Pentagon had over scripts for films like Iron Man and Goldeneye though.

Promotional shot for the Chinese movie The Battle at Lake Changjin

CNN and the BBC agree: China’s wildly successful Korean War film The Battle at Lake Changjin is a propaganda movie.

CNN put it right in the headline: 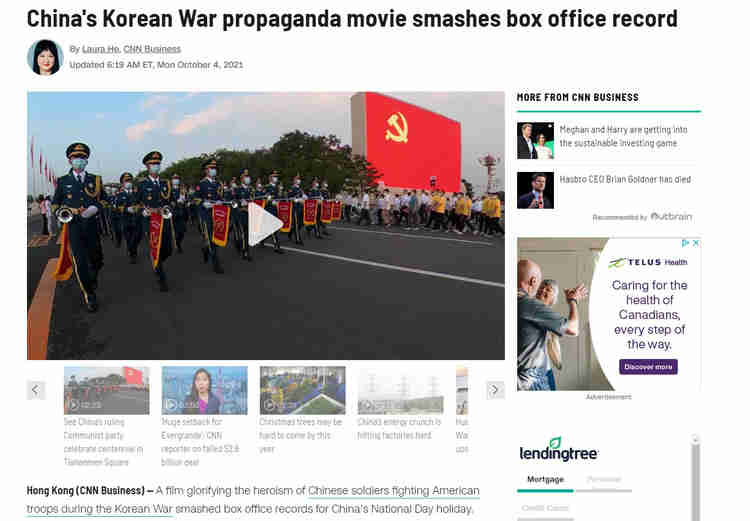 The BBC waited until the first paragraph: 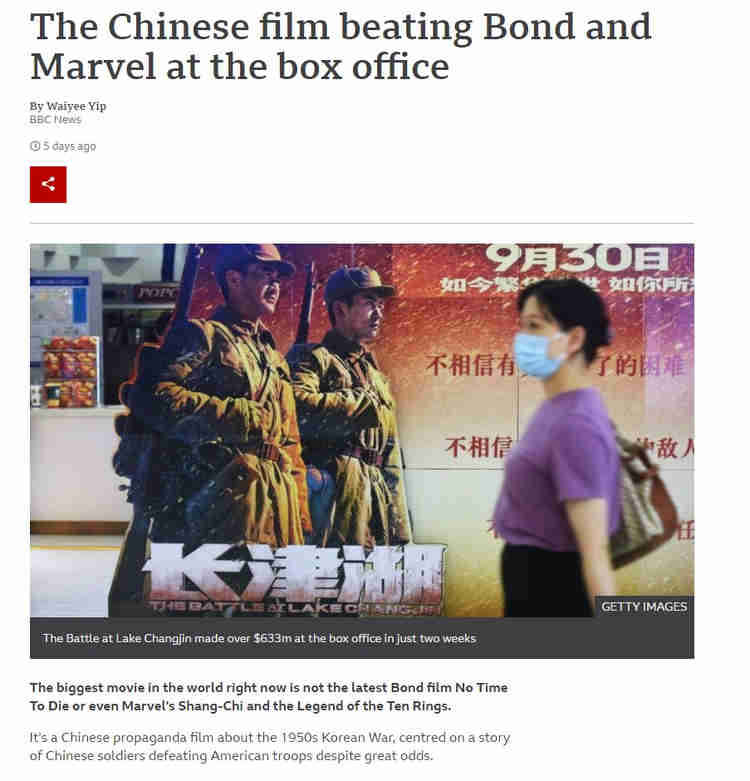 Masters of imperialist irony they don’t call either the Marvel or James Bond movies “propaganda”. Propaganda is something that only the “other side” does, after all, when you are in a new Cold War.

The James Bond movies are obvious propaganda and always have been. The BBC even ran a piece James Bond and MI6: Is there fact in fiction? in September talking to MI6 reps about the new Bond movie and the Bond character.

This is hardly the only example of how British intelligence and the British press like to use Bond as both a recruitment tool and to make people feel all warm and fuzzy about the British secret service.

One could read MI6 to recruit ‘part time’ James Bond-style spies in diversity drive in the Daily Mail, or the sobering MI6 warns James Bond wannabes spy work ‘isn’t about high-speed chases and poker’ (in case you thought it was all real) in the Mirror.

In 2015 former MI5 intelligence officer Annie Machon stated that ‘James Bond is the best recruiting material MI5 and MI6 has ever had’ which is no doubt true.

While bemoaning that Bond “bore no resemblance to reality” former MI6 chief Alex Younger stated in 2016 that “He has created a powerful brand for MI6: as C, the real-life version of M, there are few people who will not come to lunch if I invite them. Many of our counterparts envy the sheer global recognition of our acronym”.

Marvel is really no different. And Hollywood generally takes propaganda to a different level.

The role the US military and the Pentagon has played in cranking out Hollywood propaganda films is very well-established though not widely known.

You can read about it in pieces like 10 Hollywood Movie Scripts Altered By The Pentagon which also notes that the US military intervened to get aspects on the scripts of Bond movies Goldeneye and Tomorrow Never Dies changed, meaning they read the scripts in advance.

In fact, the Pentagon had “line-by-line veto power over the scripts” of Goldeneye and movies like Transformers II and Iron Man.

As Dan Tonkin noted in a Short Scripts piece:

It wasn’t long after the end of the Second World War ‘the Pentagon formally established its “film approval” process and then, in 1948, set up a special movie liaison office, as part of the Office of the Assistant Secretary of Defense for Public Affairs.’ which would continue to govern their control over the movies it chose to assist in the future. Its supposed mission: ‘studying the scripts of American war movies, deciding whether to offer them support or not, depending on their interest for the country’s military leaders.’ Hollywood soon began the vetting of all scripts in need of military resources and filmmakers forced to outfit and bend their stories to the whims of the Pentagon’s preferences. Put simply, agreeing to Pentagon script approval; allowing for their intervention with movies, being re-shaped ‘were given substantial financial and technical help; those unwilling to accept its dictates were denied any assistance.’

Tonkin goes on to say that the Pentagon was “using its relationship with Hollywood studios as a glamourized recruiting station.”

Mint Press has done admirable work around this in articles like Dangerous Liaison: The Ties That Bind Hollywood And The Pentagon, Hollywood’s ‘Captain Marvel’ Blockbuster Is Blatant US Military Propaganda, Here Are 410 Movies Made Under the Direct Supervision of the Pentagonand How the Pentagon Leaned on Hollywood to Sell the War in Afghanistan.

Just remember this the next time CNN, the BBC or any other western news outlets opine about Chinese “propaganda”.

(See also: How Many Movies has the Pentagon Prevented from Being Made?)

fuckyeahmarxismleninism:‘Workers of my country, I have faith…

Bagels, grapes and marijuana: a day in the country

If All Refugees Lived in One Place, It Would Be the 17th Most Populous Country in the World

The Incantational Bewitchment of Propaganda