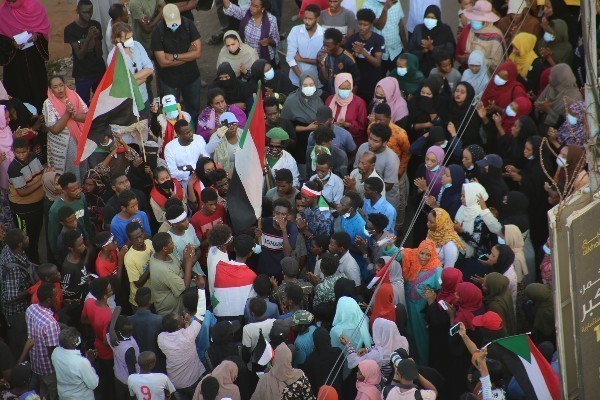 Resistance on the streets of Sudan on 17 November (Pic: Mosaab Hassouna)

The Sudanese revolt against the military coup is at a decisive point.

Fadlalla Burma Nasir of the Umma party claimed late on Saturday that the generals who seized control on 25 October are backing off. He said they are now ready to reinstate ousted prime minister Abdalla Hamdok.

Hamdok would then form “an independent cabinet of technocrats and all political detainees will be released,” said Nasir.

Such messages cannot be trusted. Any appearance of concessions is a tribute to the magnificent resistance in the streets and workplaces that had defied vicious repression for almost a month.

But a deal between the military and capitalist parties such as the Umma is an attempt to end the revolution, not complete it. All the best forces in the resistance have called for “no negotiations” with the military.

The generals blocked the transition to a civilian government in October because they did not want any reduction in their wealth and power. They also sought to avoid accountability for their crimes against protesters in 2019 and their massacres for years in Darfur.

They will not stand aside unless they think they can run the government in the background, whatever the outward appearance. Protests and strikes must be stepped up, not halted.

General Abdel Fattah al-Burhan and his co-conspirators such as the killer Mohamed “Hemetti” Hamdan Dagalo should be in jail, not making cosy deals.

Who will pay for the deaths and torture of protesters since 25 October? Where are the plans to transfer all the military’s wealth to Sudanese workers and the poor?

How will the military be permanently excluded from the government?

Before the news of a possible deal, anti-coup activists called for mass protests on Sunday. This followed a doctors’ group report that said the number of people killed since the military takeover has risen to at least 40.

Protests on Wednesday led to the deadliest repression so far, with the toll of those killed on that one day standing at 16.

“What we saw yesterday was something new. Police forces from different units all took part in the repression and killing yesterday. I even saw the traffic police firing on the protesters.”

The anti-coup Forces for Freedom and Change said that the current military rulers “are an extension of the former regime of dictator Omar Al Bashir”. He was driven out in April 2019. It stressed that “there will be no negotiations, no partnership, and no legitimacy” for Sudan’s new junta.

“The revolutionary tide and the growing mass resistance will continue until their complete overthrow,” the statement read.

On Saturday, pro-democracy activists called for a “million-strong march on 21 November”.

It’s right to call people onto the streets. But the military will continue to kill and maim.

Troops and police have permanently occupied parts of Khartoum to prevent activists from rebuilding barricades.

There are now two key measures the anti-coup forces have to take. The first is to call and organise a general strike to paralyse the economy and reveal the narrow base of the generals’ regime.

This would upset the US, Britain and the European Union who want a “compromise” settlement. But it is the only way to drive towards real change.

Sudanese activists everywhere are debating how to move forward.

Around 300 people gathered outside the Sudanese embassy in London on Saturday to protest against the coup. Many had marched there from the BBC headquarters where they demanded coverage of the resistance’s message.

Moussa told Socialist Worker, “We want to see democracy and civilian rule. We are committed to the road of non-violence and I am sure we will be victorious in the end.”

But other protesters wanted a new strategy. Shadda said, “The military has the money and the guns. I do not really believe the international community will deliver the pressure to remove the generals. They might not like them, but they might not really stop them.”

That’s right. The Sudanese revolution has shown extraordinary courage and defiance, but it must now move to higher forms of resistance, which requires a battle with the liberals who want compromise with the military.

Sudan: reaction intensifies as the masses dig in – fight the counter-revolution!