Protest against torture in Illinois prisons 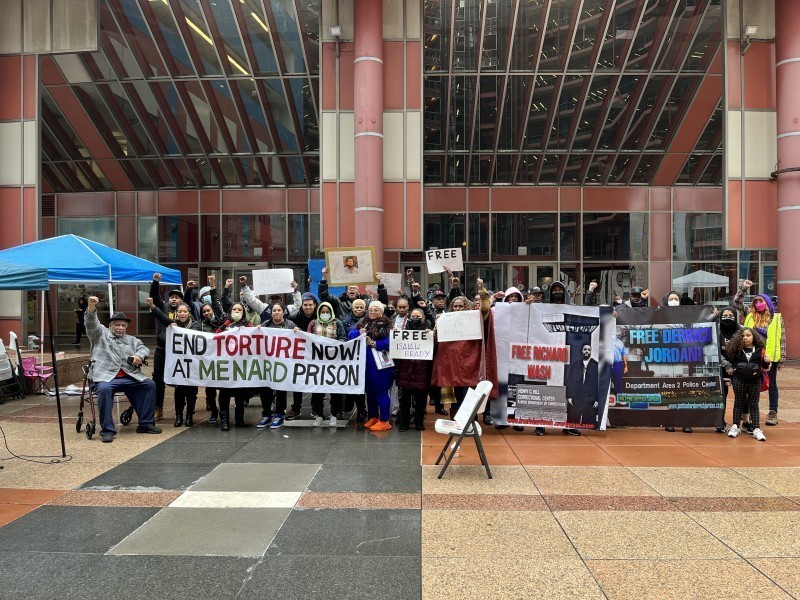 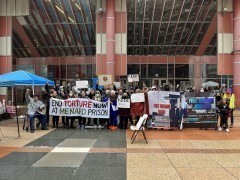 Chicago, IL – Almost two years after the rebellion that swept the country after the murder of George Floyd, people continue to come forward demanding an end to racist policing and mass incarceration. Despite the law-and-order backlash occurring in Illinois, a group of families from the Woodlawn neighborhood on Chicago’s South Side are fighting for justice for their loved ones in Menard Penitentiary and other prisons in the Illinois Department of Corrections.

At a protest in front of the State of Illinois Building in Chicago, Attorney Alan Mills of the Uptown People’s Law Center said that the oldest parts of Menard were built in the 1800s. “People have baked to death in their cells, and frozen to death in the healthcare unit! People are beaten regularly at Menard.”

Organizations in the protest included Saving Our Loved Ones (SOLO), Mothers for Justice, the Chicago Alliance Against Racist and Political Repression (CAARPR), and Southside Together Organizing for Power.

75 people rallied and then marched around City Hall and the State of Illinois Building chanting, “Shut down Menard,” “Free Isaiah Brady, free them all” and “Free Michael Minniefield, free them all!”

The action focused on the cases of four men in Menard: Isaiah Brady, Michael Minnifield, Kenyatta Brown and Chaz Thrailkill. The guards are so violent that the immediate demand is that these men must be moved out of Menard to save their lives.

Darlisa Kendall of Mothers for Justice, spoke about her son, Isaiah Brady. “My son got a murder conviction for an accident. He received 50 years.” Speaking to the mostly Black and Latino families in the crowd, she said, “Why do our children always get the longest sentences?” She shared her experience with the abusive treatment of Isaiah, “I saw him two weeks after the beatings he took from these guards, and I could not even recognize my son!”

The families vowed to continue to fight until all those responsible for these torturous conditions are held accountable, solitary confinement is dismantled and Menard prison is shut down.

To achieve an end to solitary confinement, the organizers support the passage of the Isolated Confinement Restriction Act (HB 3564), also known as the Anthony Gay bill, named for a man who endured 22 years in solitary.

Talking about the significance of this action, Frank Chapman, Field Organizer for CAARPR, pointed out that “Illinois is the only state that has a prison for people with mental illness. In other states, those inmates are placed in a hospital.” He added, “Our movement is working with these families to develop a strategy including legal action, hiring a private investigator, taking legislative action, pressuring politicians, and organizing more families to add their voices to the demands for justice.”

‘It is torture’: Women in Maryland’s prisons have nowhere to turn

AFSCME Local 1110 still without a new contract in Bloomington, Illinois

There is one place in Cuba where torture occurs

The Uyghur Podcast Brought to You by a CIA Torture Propagandist