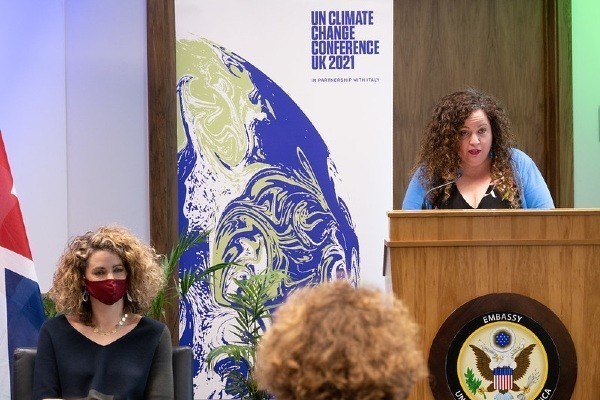 The US embassy hosts meetings in preparation for Cop26.

Activists are stepping up preparations for mass demonstrations around the Cop26 climate talks in Glasgow. The main day of mobilisation is Saturday 6 November, just three weeks away.

The demand for politicians to stop delaying and act is urgent.

Every week brings more evidence of climate chaos. Almost 2 million people in the Shanxi province of China have been affected by severe flooding caused by torrential rainfall.

The downpours destroyed up to 17,000 homes across the province, and whole villages have been submerged.

On average around 31.3mm of rain falls in the province every month. This month a huge 119.5mm of rain battered the landscape.

The floods come just three months after devastating floods in Henan province killed up to 300 people and displaced thousands more.

And at least 13 people were killed in floods in Oman and Iran last week due to heavy rainfall and a cyclone. Oman had five years’ worth of normal ­rainfall in a single day.

Deadly extreme weather is already causing misery and much worse is threatened.

But the Cop26 talks are unlikely to produce any real answers.

Instead the organisers are concentrating on empty gestures. They are preparing to roll out the red carpet for the queen, prince Charles and prince William, who are set to speak at the conference.

Gareth Redmond-King, Cop26’s communication and engagement lead, said the move shows the “seriousness with which Britain is taking its responsibility.”

It’s already clear there will be a major repressive operation to protect the gilded elite who preside over a world heading for environmental collapse.

Sections of the M8 ­motorway could be shut down on 1 and 2 November to accommodate the arrival of leaders such as US president Joe Biden.

The River Clyde will be closed to its usual traffic to give free passage to police gunboats.

The inconvenience to ordinary people caused by the Cop conference itself has been largely ignored by the press, who continue to spout lies about climate protesters.

Newspapers such as The Mirror and the Metro have repeatedly reported that an Insulate Britain blockade on 4 October meant an ambulance couldn’t get through.

But this was recently disproven by the London Ambulance Service NHS Trust. It reported that since 4 October, there were “no reports of any incidents under the category of ‘Transport Delays’ in our incident reporting system.”

Insulate Britain has also said its policy is to let emergency vehicles pass, and posted videos of its activists doing just that.

Ahead of Cop26 the mainstream press and politicians have tried to demonise climate protesters—especially those who cause disruption.

But direct action must be part of the protests at Cop26.

There is a call for student strikes and workers’ action on 5 November. We must then flood the streets on Saturday 6 November.