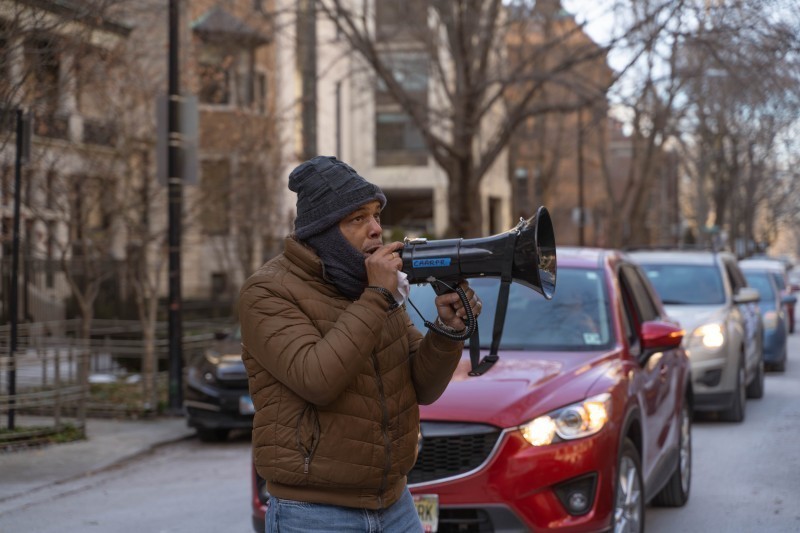 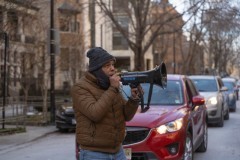 Chicago, IL – On the afternoon of January 22, organizers shut down the city block in front of Governor Pritzker’s Gold Coast mansion for 15 minutes, demanding immediate action to address the surging COVID cases in Illinois prisons and jails. Organizers dropped a letter on Pritzker’s doorstep calling for a mass release of those incarcerated, beginning with the elderly and those with underlying medical conditions who are especially at risk.

The call to decarcerate correctional facilities has been sounded since the rise of COVID-19 and was repeated as further surges and variants put those inside at risk. The governor and Illinois Department of Corrections have done little in response since the early days of the pandemic. Kiah Sandler from the Coalition to Decarcerate Illinois put it plainly, “One thing needs to be made very clear to our governor, Illinois Department of Corrections, our legislators and our representatives: What is taking place inside our jails and prisons is a medical crisis.”

The day began outside Cook County Jail with a rally called by the Campaign to Free Incarcerated Survivors of Police Torture. “Incarcerated people are being treated like their lives do not matter. They cannot socially distance, they cannot quarantine, they cannot get medical care, and they’re not the ones bringing COVID into these prisons,” said Liam Collier, co-chair of CFIST (Campaign to Free Incarcerated Survivors of Police Torture), “Only 66% of prison staff in Illinois are vaccinated, compared to 75% of incarcerated people.” Prison staff are under mandate to get the first dose of the vaccine by the end of January.

The crisis is not limited to prisons. Cassandra Greer, whose husband Nick Lee died from COVID in Cook County Jail, said that Cook County Sheriff Tom Dart “has a blatant disrespect for lives. Not only the inmates, but his employees as well. It should not be the same situation in 2022 as what happened in 2020 when Nick died.” She added, “So we are asking Governor Pritzker to please stand with us. Because the mayor don’t care. The Cook County Sheriff don’t care. And it’s profit over people”

“Divisions selected for quarantine, such as Division 5, were previously condemned areas of jail that were reopened without any extermination of the mold, insect, or rat infestations,” shared a member of Chicago Community Jail Support, “The debris in the air and the lack of medical care is causing long-term respiratory issues.”

“All of the mothers I work with are not sleeping at night, living a nightmare that their kids could die in a COVID-infested cell,” said Bertha Escamilla, of Mamas Activating Movements for Abolition and Solidarity. “We will not allow this corrupt system to devalue our children.”

After the rally, the group formed a car caravan that proceeded past the Juvenile Detention Center on Ogden, past the Thompson Center, ending on the governor’s street. Surrounded by over a dozen cars, Mark Clements, Community Organizer with the Chicago Torture Justice Center, addressed his message directly to the governor, “We know you have let many people out, but we are asking that you give these brothers and give these sisters an opportunity. They’ve got mothers. They’ve got fathers. They were not sentenced to death. And with this pandemic, and with the mistreatment, and with the medical mistreatment behind prison walls, you already know, they are serving death sentences, governor.”

Frank Chapman, Executive Director of the National Alliance Against Racist and Political Repression, drew a connection to the impending release of Jason Van Dyke. “They’re going to let Jason Van Dyke out on February 3. If they can let that criminal out, who murdered a child, shot [Laquan McDonald] 16 times, they can let our people out!”

On the day of Van Dyke’s release, The Campaign to Free Incarcerated Survivor of Police Torture will join Rainbow PUSH Coalition, Black Lives Matter-Chicago, Indivisible Chicago-South Side and other allied organizations in a Day of Outrage and Direct Action to demand the U.S. attorney and the Department of Justice indict Jason Van Dyke at the federal level.

“The movement fought for years to get Van Dyke behind bars, and we will not let him walk free after murdering a teenager,” Chapman said, “We will not stand by while our loved ones and community members are kidnapped, tortured, brutalized and murdered with impunity.”