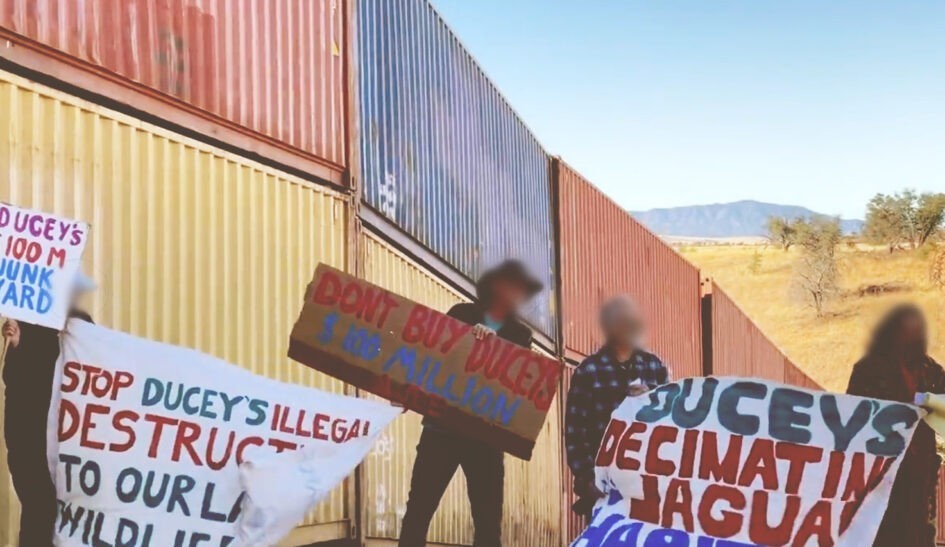 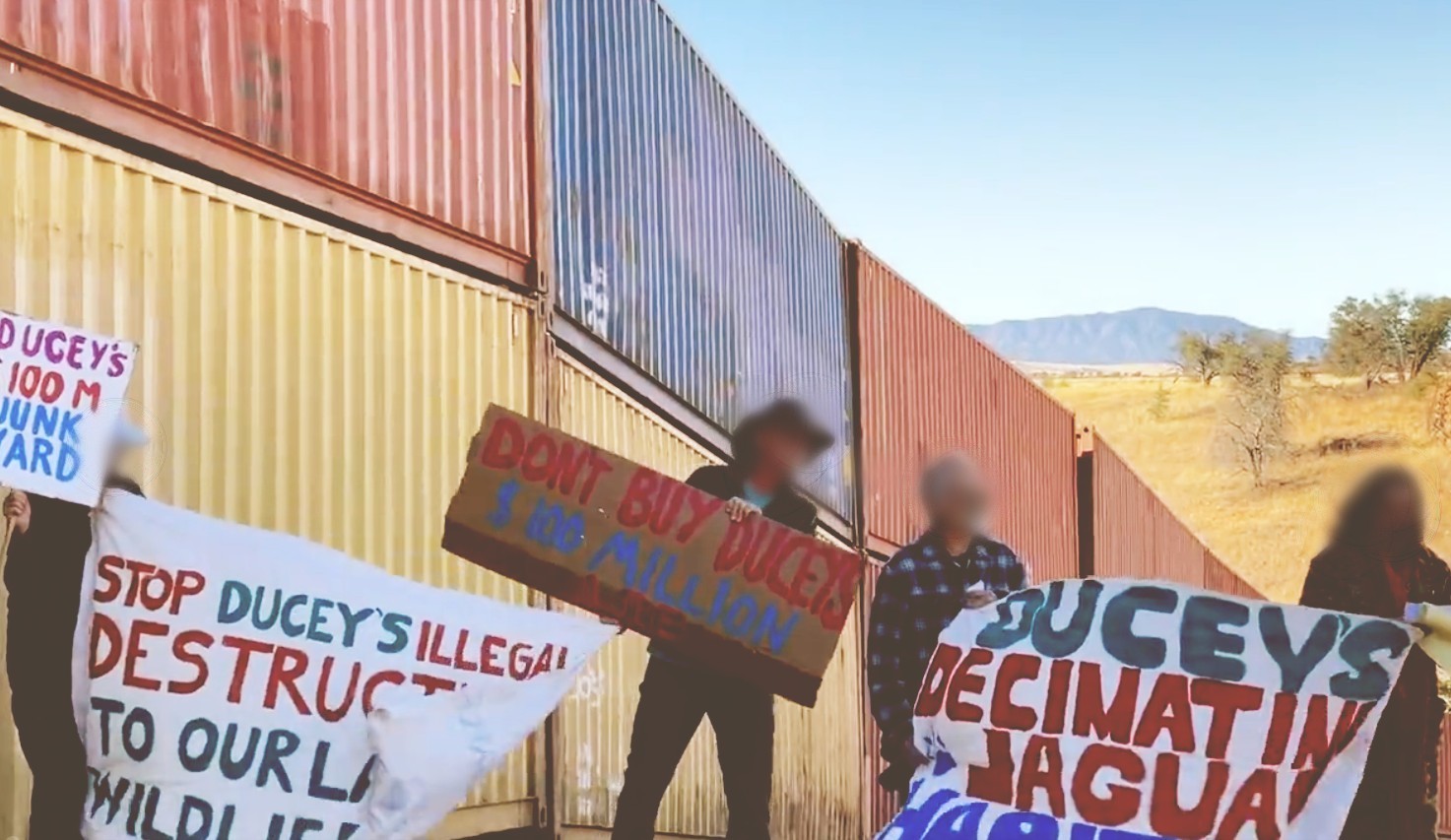 Above Photo: photo/screenshot: @PeccaryNotPig
Arizona – Former CEO of Cold Stone Creamery and current Republican Governor of Arizona, Doug Ducey, is attempting to flood several miles along the Arizona-Mexico border with shipping containers, citing an “invasion” from asylum seekers. As the AZ Mirror reported:

The strip of land on the border, which has been the subject of recent disputes between Ducey and federal agencies, is known as the Roosevelt Reservation, established in a proclamation issued in 1907 by President Theodore Roosevelt as “necessary for the public welfare.”

Right now: protestors have successfully shut down construction of Doug Ducey’s illegal Arizona border wall for a week straight. The contractors tried to restart work at midnight tonight but were immediately halted again by some determined night owls. #carpenoctem pic.twitter.com/6wcX5dWCMh

The haphazard wall of trash has generated both protest and condemnation from local residents, tribal governments, environmentalists, and anti-border activists. As Melissa Del Bosque reported:

…the U.S. Bureau of Reclamation and the Cocopah tribal nation said that Ducey is violating federal law by placing the containers on federal and tribal land. In a letter, the Bureau demanded that the state remove the containers, which it has not.

On October 21, Ducey filed a lawsuit against the federal government claiming that the federal land actually belongs to Arizona and that it has the constitutional right to protect itself against an “invasion” at the border.

The Earth First! Journal also noted the impact of the construction on local eco-systems, writing:

In addition to disrupting the lives of wild animals, construction has already destroyed many oak trees, built through desert streams, and cleared a giant area for staging their machinery. After finishing up in Arizona the company expects to move on to other areas of the border in order to fill in the gaps left when Joe Biden put a halt to construction of Trump’s wall.

The situation, according to southwest conservation advocate with the Center for Biological Diversity Russ McSpadden, “would be laughable if it weren’t so damned detrimental to wildlife.” Not only can most human beings with desire easily climb over the shipping containers, most animals (who enviously have no concept of borders) are now cut off from food supplies.

Beyond legal challenges, protests have also been ongoing and so far “have successfully stalled construction” over the past week, reports the Herald Review. They write:

Because the construction site is located within the Coronado National Forest on public lands, anyone is legally allowed to recreate in the area. Zack Palma, one of the protest’s organizers, described the protests as “strategic legal recreating.”

“If we don’t leave, eventually they leave,” said Palma. “There’s not really a confrontation. It’s just legal recreating in a strategic spot and that stops their construction. We’re not going to change minds, we’re definitely not going to change Ducey’s mind. And so I like to think of it as we’re actually out there trying to make something physically happen. If we can stop one container a day, if we can stop all construction, that’s a huge win.”

With the federal government moving slow, residents who live near the national forest and others are traveling daily to protest at the construction site in an attempt to slow the progress. Besides damaging public lands, local residents also told me that the trucks carrying the containers travel at high speeds and are destroying roads leading to the construction site. On my way to the site last Tuesday I observed handmade “slow down” signs that residents had made to try and convince the truckers to drive slower through their communities.

When protestors are present the contractors typically stop work, which has slowed the barrier’s progress, said Kate Scott who lives nearby and has been participating in the protests. “We know that the legal filings are in process,” said Scott. “But this still continues. So we’re going to be here,” she said. “We’ve all made a pact.”

Work was stopped for the fourth consecutive day Friday, on Arizona governor Ducey’s illegal border wall in the Coronado National Forest. Protesters put their bodies in between the machines and the destruction they were bent on causing, forcing work on the illegal wall to come to a stop.

Defenders of the wildland also stood between machinery and the wall on November 29th, not allowing a single container to be placed. There were also two other days in between the 29th and Friday where activists managed to stop some of all of the company’s work for the day.

Quiet in the borderlands yesterday at Gov Ducey’s illegal border wall. Protesters have stopped construction for seven days now. Contractors were building a 10th of a mile a day. They haven’t built a 10th of a mile in a week. They can’t remove people from public land.

As the Earth First! Journal noted, one of the companies at the center of the construction project is located in Florida:

Construction of the makeshift wall began in October of this year and is expected to cost around $95 million by the time all is said and done. AshBritt is the name of the company profiting immensely off of the illegal, unethical construction. AshBritt (a company so un-savy that they don’t even have a secure website) is located at 565 East Hilsboro Blvd in Deerfield Beach, Florida. They can be reached via phone at (954) 725-6992 and email at [email protected].

What Comes after a Cycle of Protests? The Case of the 2020 Women’s Protests in Poland