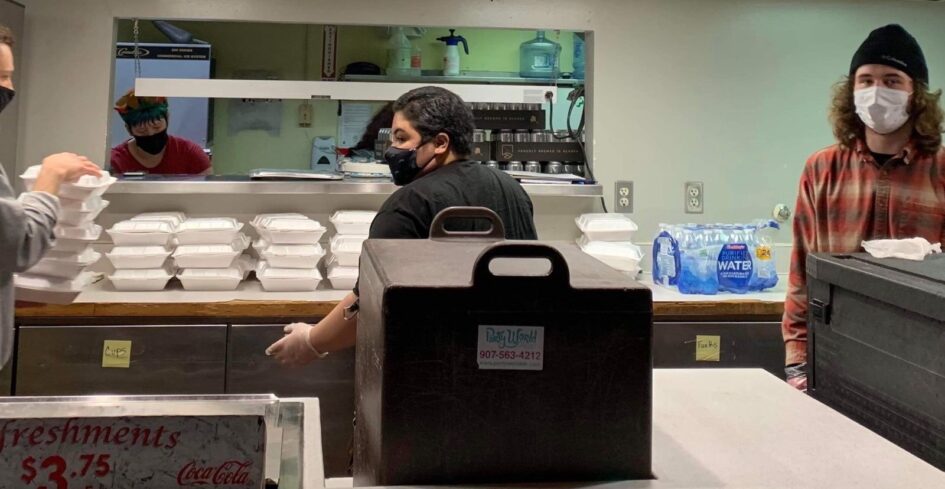 On Christmas Eve morning, Party for Socialism and Liberation – Anchorage partnered with local organizations to serve breakfast to the over 500 people sheltered in the Sullivan Arena, the largest homeless shelter in the United States. While breakfast, lunch, and dinner are provided to residents on a daily basis, fresh, hot food remains a rarity at the Sullivan, and because of this, the reaction from the residents was overwhelmingly positive.

The Sullivan Arena, a hockey stadium, is a “temporary” shelter that has housed hundreds of people since March 2020. According to residents, conditions inside are uncomfortable and difficult.

Local organizations that partnered with PSL for the breakfast included Sol de Medianoche, The Business Boutique and 99+1, and the food was catered for the event by local restaurants Waffles and Whatnot, the French Oven Bakery and the Paris Bakery, who generously prepared more than enough food for the event.

The Christmas Eve Breakfast marked the beginning of Anchorage’s Unity & Survival program, which was developed with the help of the Philadelphia PSL branch. The initial area of need that the Unity & Survival program aims to address is supporting Anchorage’s unhoused population. Over the winter months, it is especially important that the needs of Anchorage’s disproportionately large homeless population are met — over 1,100 people are without homes on any given night. Anchorage, which has a population of a little over 293,000, has a larger per capita rate of homelessness than many lower-48 cities, including Portland, Las Vegas and San Diego.

Every year, dead bodies are found frozen in the expanse of the city’s vast urban greenspace. In the absence of any housing options, people pitch tents and attempt to endure the bone-chilling winter cold. Anchorage has the coldest winters of any major city in the United States.

Despite the seriousness of the crisis, the municipal government has done very little to find a solution to the problem. Recently, Anchorage developed the Mass Care Exit Strategy — a plan that was developed after PSL Anchorage submitted a social housing proposal to the city’s former homeless coordinator John Morris.

The plan gradually moves people out of the Sullivan Arena and into five different types of permanent housing, including a “shelter and navigation center for adults, a ‘special population facility’ with a navigation center, a medical convalescence facility, substance misuse treatment with housing, and workforce and permanent supportive housing units.”

So far, however, the municipality has only given vague estimates as to when these sites will be available and has not released a plan for the construction of new housing units or increases in affordable housing availability.

The Sullivan Arena shelter, a band-aid that has been on too long

2022 will mark two years since the Sullivan Arena has been Anchorage’s primary and nation’s largest homeless shelter. Conditions in the shelter are dismal, but the city is doing little to nothing to improve the conditions, and they have no plan or timetable for moving residents out of the “temporary” shelter in the sports arena.

Inside the Sullivan area, residents lack access to indoor bathrooms and even bunks and cots to sleep in. Liberation News spoke to a four-month-long resident of the shelter shortly after everyone was served on the morning of the 24th and asked him to describe life in the arena.

“Before you guys came here at the beginning of the month, at the end of last month there was like 400 plus people here … it was hectic,” he said.

When asked about the availability of bunks and cots, which are rationed through the use of a waiting list, he described the process of accessing a place to sleep.

Another area of concern for residents was access to laundry. “Since I’ve been here I haven’t even used it,” he said. A bystander added there was “at least a hundred bags of clothes down there [in the laundry area] waiting to be washed. And we don’t know out of those bags how many of those people have passed away or moved into hotels. ”

The resident described the process of getting into hotels, stating anyone interested would have to “put in applications over here, give them your whole situation, … and then they’ll put you on a list.”

For his personal situation: “They’re trying to put me down for housing and I don’t know how long I’ll be here for that. I want to try to get into a hotel first and then move into housing after that.” He said placement happened in “hotels first, and once they have an opening for housing they will let you know.”

When asked what he would do once he gets into housing, he stated that he would “come back down here and talk to some of the others and say ‘hey, if they did it for me, they can do it for you guys and help you move forward.’”

The many people receiving breakfast at the Sullivan Arena almost universally expressed the sentiment that the city was not doing enough to help the homeless population. “Housing is a human right” was a popular slogan among all. PSL Anchorage is demanding that the city work to turn this goal into a reality and ensure that no one in this community goes unhoused. The $51 million in American Rescue Plan funds that the city will be receiving by May should be allocated to both the purchase of existing and construction of new permanent housing units for the homeless population. The fight will continue on into the new year and PSL Anchorage will not rest until the right to housing is guaranteed for all.

Anchorage unites against anti-maskers and the far right

Homeless and under attack

A case for the homeless

Deconstructing Electric Vehicles on the Eve of Glasgow COP26

Deconstructing Boats on the Eve of Glasgow COP26