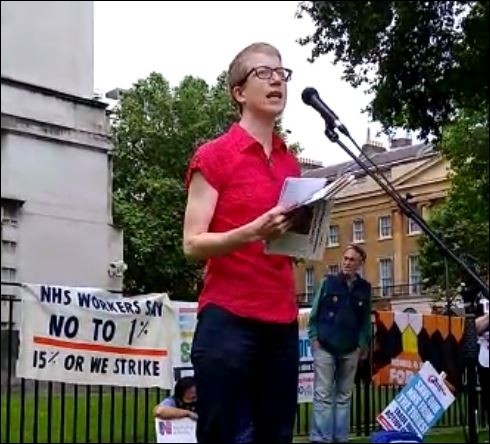 Link to this page: https://www.socialistparty.org.uk/articles/32845 The Tories have announced the pay award for NHS workers and teachers. After all they have done, a million health workers have been told that they are only worth a 3% pay rise, when inflation is higher than that. A million teachers have been told they are worth nothing in terms of a pay rise this year. Hundreds of thousands of civil servants face a pay freeze. A million and a half council workers have already been told they are only worth 1.5%.

These insults don’t include all the care and NHS workers employed in the private sector.

Today there are nearly 3 million public sector workers in a trade union. They must now come together to prepare to fight the pay freeze/pay cap.

Socialist Party members in the trade unions made statements:

3% is such an insult to NHS workers. It’s a tiny fraction of what health unions have been campaigning for. Our unions must launch a campaign now for members to reject the offer, and start preparing for action.

Our unions must campaign for a vote for action, and show they are prepared to lead a strike.

The government thinks it can make working class people pay for its horrific mishandling of the Covid crisis. We need to prove it wrong. Unions must coordinate action across the public and private sector to break the pay freeze/pay restraint that the government is trying to enforce.

All the other key workers who kept society running throughout the pandemic deserve a proper pay rise too. We need to link up NHS workers with council workers, teachers and civil servants who’ve been offered even less or nothing at all. Outsourced workers in the NHS deserve NHS pay and conditions, including a proper pay rise!

The fiasco over the NHS pay offer announcement shows the government is deeply divided. It has made U-turn after U-turn. We have the power to force it to U-turn over public sector pay as well. My conversations with members are favouring a yes for strike action to secure an improved offer. 3% with/without part-consolidation is a further real terms pay cut, in the context of five million on hospital waiting lists, projected to be 13 million by the year end. The virus is heading upwards and staff are set for a further pummelling. Now is the time to say no; and fight for the full justified claim, and link that to fighting to stop the Tories’ privatising Health and Care bill.

The 3% award from the government is an absolute insult and will cause more injury to an already overwhelmed NHS. Staff have gone above and beyond and have shown their worth during the pandemic and now they are on their knees.

This offer makes clear that the government does not intend to invest in the future of the NHS or its staff. We are heading into another Covid wave and have millions on waiting lists and we simply cannot do this without urgent prioritisation of recruitment and retention and to address the 100,000 vacancies we have.

Patient care and safety will continue to be compromised and we will take all necessary actions to fight for their safety, our working conditions and to protect the NHS.

The NHS pay review body in Wales has made a 3% pay offer, the same as the paltry amount offered in England – another below-inflation increase which will leave many workers worse off in real terms.

This was announced by Eluned Morgan, Labour’s Welsh health secretary. Ms Morgan thanked staff for their “extraordinary efforts over the course of this pandemic”.

“Many staff have worked extremely long hours under enormous pressure,” she said. Disgustingly, NHS staff in Wales have not been recognised for this sacrifice, and the calls by Welsh health unions for a 12.5% increase have been ignored by Welsh Labour.

Starmer’s Labour in England put forward a 2.1% rise in March, less than the Tories’ final offer, and Welsh Labour’s offer proves again that the party does not represent the working class. Trade unions must set about the creation of a new party to represent our interests.

In May, Socialist Party Wales stood in the Senedd elections as part of the Trade Unionist and Socialist Coalition, including health workers in our list of candidates. This is a step towards creating a new, mass party that will fight for the future of our NHS.

Pay rise must be fully funded by government

The NHS is in crisis, waiting lists are ever expanding, and staff vacancies remain unfilled in their tens of thousands. Urgent investment is needed to fully fund the services we need.

But in an attempt to divide NHS workers and those patients sat on endless waiting lists, the government has told the NHS that it will not be funding the full cost of the proposed pay rise. This would mean service cuts.

It is essential that the trade unions struggle not only to secure a decent pay rise in the NHS and in the rest of the public sector, but to ensure that this includes the demand for fully funded services, paid for by the super-rich.

Hospital consultants, organised in the union the British Medical Association (BMA), will vote on whether or not they would be prepared to take strike action in response to the NHS pay offer.

The consultation will run through to mid-August, to be potentially followed by a formal ballot. If doctors decide to go on strike over pay it would be for the first time since the 1970s.

And we knew that was coming. Because the government has made absolutely clear that it wants us to pay for the crisis that it has created. This is despite all the work we have done throughout the pandemic, alongside our colleagues in the rest of the public and private sector.

And so the NEU’s press release is absolutely correct to say that it is unacceptable to be imposing a pay freeze. When inflation is rising, it is, in reality, a pay cut. But it’s going to need more than a press release to stop these kinds of attacks.

We need to learn the lessons of how we forced the prime minister into a U-turn over Covid-related health and safety, and that’s by using our collective strength and using it nationally.

That’s why in November, when the pay freeze was first mooted, I called for unions to call a joint conference to put together a plan of action, of meetings, rallies, demonstrations and industrial action, to oppose the attacks that were coming on pay. In the hustings for the NEU deputy general secretary election similarly I’ve consistently explained that we need to organise that kind of a plan. To go out to inspire and explain to our members the action that’s going to need to be taken. To make sure that we put in place the steps that can help us to meet the ballot thresholds, with addresses being checked, so that we can return those ballot papers with the maximum turnout that we can.

And I’ve also said that we need to produce materials for parents and the public to explain why, when the review body says that already a fifth of teachers are leaving the job within the first two years, a third within the first five years, a pay freeze like this will make things even worse and create even more instability in the classroom.

But some of my opponents say: the problem is that Martin underestimates the difficulties ahead of us. He thinks we can win a national ballot very easily. Well actually no, the opposite is the case. I know the hard work that is required to win a national ballot and that’s why I’m so frustrated that the preparations haven’t been done.

And we cannot delay now. The preparations have to be made so that we can defeat the pay cuts and win the demands that we also have to get rid of performance-related pay; and also to win on workload, a limit on overall hours – all things that are covered by the remit of the STRB and the School Teachers’ Pay and Conditions Document.

And last but not least, we also need urgently to bring the unions together to work out a joint plan of action so that we can work together to defend our conditions and our pay and also defend the services that we work in. Let’s get on with it, let’s not delay.

3% for NHS workers is not enough. Civil servants and teachers are being subjected to a pay freeze. Council workers have been told 1.5%. It’s a disgrace, exposing the platitudes of the Tories towards crucial workers who have delivered tirelessly, putting their lives on the line. The three million workers organised in the public sector trade unions must now unite to fight on pay. Where are the trade union leaders?

Unison members are angry and bitter. Especially the lowest paid workers such as school support staff, library workers, and street cleaners who have continued to work on the frontline throughout the pandemic, risking their health and safety. Some members have had to go to food banks. Another year of a next-to-nothing pay rise means that only a real fight, including industrial action, will win a decent pay rise. We really need the new Unison leadership to step up and begin organising for this, linking with the health workers.

Can you assist in getting this motion passed in your trade union branch or organisation?

This (union organisation/conference) believes that the Tories’ pay awards for NHS workers, teachers and the rest of the public sector are an insult and should be opposed.

2. Call on the TUC and the public sector unions as a whole to come together to prepare to fight the pay freeze/pay cap. This should include:-

This version of this article was first posted on the Socialist Party website on 22 July 2021 and may vary from the version subsequently printed in The Socialist.