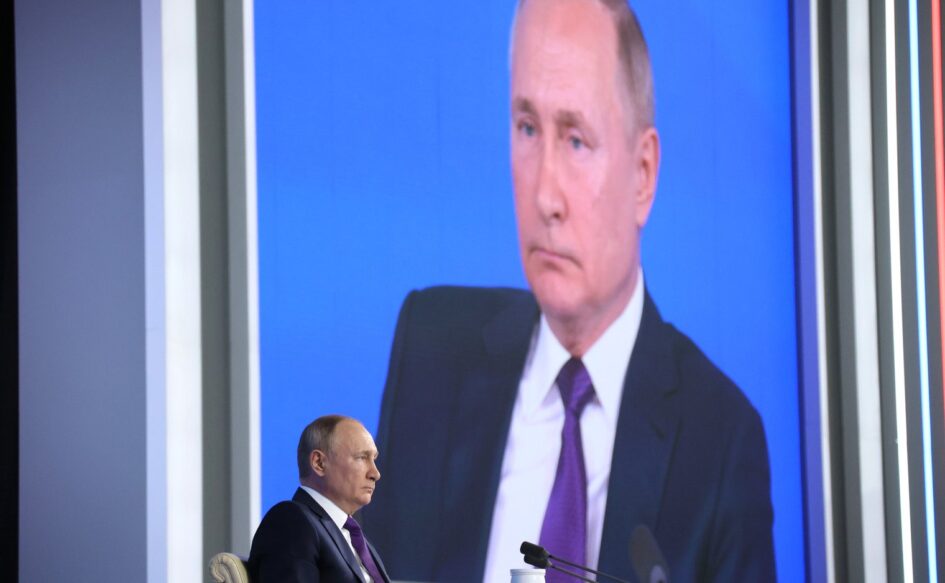 This story originally appeared in openDemocracy on Jan. 19, 2022. It is shared here with permission under a Creative Commons (CC BY-NC 4.0) license.

I’m often asked the following question about Ukraine: ‘Why is Putin doing this? Why does he want to attack Ukraine? He’s doing OK, what is he unhappy with?’

I always give the same answer: Vladimir Putin is not attacking, he is defending himself.

In an attempt to understand Putin’s motivations, observers compare the possibility of a Russian military operation against Ukraine to the current situation–that is, the absence of a full-scale military operation.

The thinking is that Putin is faced with a choice: to go ahead with an operation or leave matters as they are. The usual conclusion drawn from this line of thinking is that the current state of play suits Putin fine, while a military operation against Ukraine would have both benefits and significant costs. The costs of an escalation, therefore, need to be increased to alter Putin’s cost-benefit analysis.

Yet Putin and his associates appear to view the proposed operation not in comparison with the current situation, but with a future situation. Both domestically and internationally, the Kremlin’s position is deteriorating, and for Putin, the state of affairs in the near future without a military operation against Ukraine seems to be much worse than with an operation.

In other words, Putin now has a window in which a Russian military operation looks possible. In the future, it will either become impossible or will involve unacceptable costs.

There are three main factors behind this closing-window effect.

First, levels of support and legitimacy within Russia itself. Russian society is becoming tired of Putin and it is unlikely he will be able to ‘reset the agenda’ again–few people believe that this is possible anymore. Young and middle-aged groups are tired of Putin, his electorate is shrinking and leaving even faster in lieu of the global pandemic. At the same time, the effectiveness of the Kremlin’s media channels is decreasing, as Russians learn to consume information from multiple channels (that is, they are learning not to trust only a single source of information).

At this point, it seems plausible that a military operation that would not require too many casualties among Russian soldiers, but will be properly televised (the “sofa war”, as it is called in Russia), is likely to receive approval among Russians. It is dubious, however, if this will be the case in two or three years from now, as the Russian public gets increasingly bored with foreign relations and focuses on domestic issues.

Second, the foreign policy situation is deteriorating. Obviously, the Minsk agreements, which were developed in 2015 and meant to end war in the Donbas region of eastern Ukraine, did not have the desired effect. Ukraine is drifting towards a soft association with NATO, and even turning the Donbas into a hotbed of instability inside Ukrainian territory has not become insurance against this. The prospect of Ukraine joining NATO de facto without being accepted to it formally visibly scared Russian hawks in 2020-2021 when Ukrainian president Volodymyr Zelenskyy significantly reshaped his foreign strategy. At the same time, Russia has few allies in the West and practically no one to rely on.

Thus, in the summer, Putin published an article concerning Ukraine (‘The Historical Unity of Russians and Ukrainians’), where he considers only two options for the future of Russia-Ukraine relations. One scenario involves bringing pro-Russian politicians to power in Kyiv as a result of economic strangulation, and Ukraine thus becoming a Russian protectorate. The other suggests that the ‘Ukraine problem’ will be solved by military means.

The first option is preferable for the Kremlin, but its chances of success are decreasing. In the past year, an investigation against pro-Kremlin oligarch Viktor Medvedchuk has begun in Ukraine, Zelenskyy has signed off on sanctions against pro-Russian TV channels, and pro-Russian political parties have performed, on the whole, poorly. At the same time, the Kremlin believes that at least part of Ukraine should be controlled by Russia: no other options are compatible with the existence of Putin and Russia in the medium term.

Without a doubt, the approach of NATO and the growing discontent in Russia are perceived by Putin not as two different problems, but as a single, combined one. As he sees it, the enemy is approaching directly and, as it approaches, is carrying out subversive operations.

Third, some of Putin’s statements suggest that he believes that Russia currently has a certain military and technological advantage, which will soon be neutralised. This means that it is possible to force Ukraine and the West to accept Russia’s conditions for getting Ukraine under control with the help of a military threat now, but in the near future it will no longer be possible.

In other words, Putin is working on the basis that if he does not eliminate the threat of losing control at home and abroad now, then in two or three years the risks will become unacceptable. Therefore, attempts by NATO members to increase the costs of Russian military action are probably only convincing him that the imminent danger from NATO is too considerable to wait.

Can this situation die down if Putin decides that the costs are too high? On the one hand, there is little to prevent him from saying: ‘Well, they don’t want to accept our conditions, and to hell with them, let’s do something else.’ Conditions for a dignified departure will be provided via negotiations.

On the other hand, Russia’s top-level assessments of future risks as unacceptable probably don’t come from Putin himself, but rather from the country’s military and political leadership. Russia’s current tactics are most certainly the result of extensive collective planning. This means that it will not be possible to simply exit the tailspin that Putin has already climbed into – you will have to somehow explain what has changed and significantly correct the perception of ​​the risks that Russia and its elite are facing.

Thus, if the current tension does not end in a military operation against Ukraine (assuming the conditions put forward by Putin will be ultimately rejected), it will almost certainly result in a serious shake-up in Russia’s elites. And in this scenario, it’s unclear whether Putin himself will hold onto power–though there is little doubt over his tenacity.

What Putin is doing is not only a ‘mad attack’ against Ukraine, but a desperate defence of Russia’s current political structures. This makes the situation much more dangerous. It is easier to persuade someone to rescind an attack than to stop resisting what is perceived as an existential threat. But with the window for drastic action gradually closing, if we can prevent a military operation in the immediate future, there could be significant change in Russia itself.