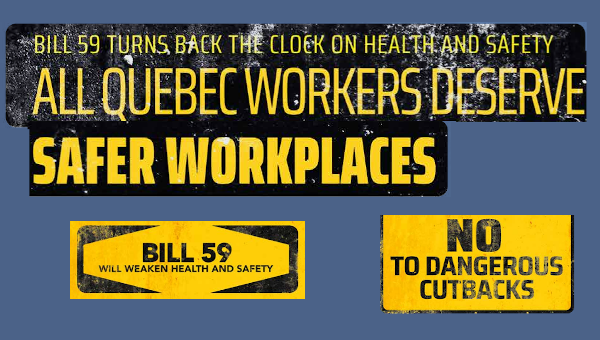 Bill 59 (now Law 27) on occupational health and safety was adopted, as amended, at the end of September by the National Assembly, against the unanimous opposition of the unions, organizations for the defence of unorganized workers, and all the opposition parties. Even if the struggle will undoubtedly continue, this marks a major defeat for Quebec’s working class.

The government advertised Bill 59 as a law to “modernize” the existing Law on Workplace Health and Safety, first adopted some forty years ago, though never fully applied. In fact, Law 27 seriously weakens the rights to compensation that the former law granted workers.

As for rights to participate in the prevention of workplace accidents and illness, rights that, despite the law, were in practice never granted to more than a small minority (15%) of workers, these are not yet entirely known, since the Minister of Labour, faced with the opposition to his law, decided to leave their determination to the board of directors of the CNÉEST (Commission for Standards, Equity, and Occupational Health and Safety). This joint body, with parity representation of unions and employers on its board of directors, will have three years to adopt the appropriate regulations. Failing that, the Minister will do it himself. 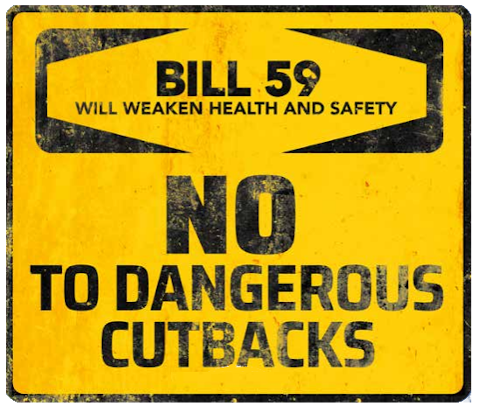 In the meantime, the small minority of workers who already had prevention rights will retain them for a maximum of four years. This is so, at least with regards to the release time of their elected prevention representatives.

But the latter will ultimately lose a large part of the power – already very limited – that the former law gave them: joint (with the employer) participation in adoption of the health and the prevention programmes for the enterprise; joint participation in the choice of doctor responsible for the enterprise; joint control over the content of workers’ training programmes. While the old law granted workers the right to propose and to veto in regards to these issues, they will now become the prerogative of the employers alone.

As for the other unionized workers, from April 6, 2022, they will enjoy greatly reduced rights, since their representatives will have only a quarter of the release time that the 1979 law had granted. That means that the base point from which the negotiations with the board of directors of the CNÉEST will begin will already be much reduced from what the former law had granted.

Some observers have speculated that there was an agreement between the minister and the union federations to relegate adoption of the regulations to the board of directors of the CNÉEST, which will have three years to do that. That would explain why deliberations in the parliamentary committee that was discussing the bill came to a sudden, unexpected end. If there indeed was such an agreement, it did not clearly establish the release time for the sectors whose workers not had enjoyed prevention rights all these decades. If that is what really happened, it was a serious mistake.

And the situation of non-unionized workers will remain as bad as before, since the Minister of Labour rejected virtually all of the amendments that would have given them prevention rights. And the non-unionized are the majority of Quebec’s working class.

To Participate or Not?

The outcome places Québec’s union movement in a rather delicate situation, to say the least: having unanimously rejected the bill as amended, it will now participate within the board of directors of the CNÉEST in working out the terms of its application. The obvious justification of this contradiction is that the outcome would be worse without union participation – its parity representation on the board of directors gives the union movement a certain veto power, at least until the minister breaks the deadlock. And it is not hard to guess to which side he will lean.

The argument that the result would be worse if the union refused to participate, undoubtedly has some merit. But the same arrangement also gives the employers a veto. And the striking weakness of the temporary prevention rights that the minister gave workers in the sectors where they previously had none sends a clear message to employers: don’t make any concessions because the government is on your side.

For more than forty years, the parity-based board of directors of the CNÉEST has served as the justification for the refusal by a succession of governments to give the overwhelming majority of workers the prevention rights that the law provides. The result is that Quebec has, and will no doubt continue to have, unless there is a serious shift in the correlation of class forces, the weakest prevention regime in all of North America.

One can legitimately ask if the “partnership” arrangement of CNÉEST’s board of directors has not contributed to distracting the union movement from what is most essential: building a correlation of class forces that would allow workers to win the prevention rights they deserve. Would the present government have presented so pro-employer a bill, and then make so few concessions, if it had feared the unions’ reaction?

To build the necessary correlation of forces, it is necessary first of all to strengthen the importance of prevention in union life, including directly in the workplaces. There are obviously exceptions, especially in heavy-industrial sectors, but prevention has not played the role it deserves, and especially not in the broad sense of defending the quality of life at work.

The main reasons are clear. The last three or four decades have been a period of offensive on the part of capital and demobilization of the worker rank and file. This has been accompanied by the growing bureaucratization of the union leadership, which has embraced “social partnership,” an ideological position that, in the final analysis, denies the fundamental antagonism that opposes the interests of capital and labour.

In these conditions, wages and jobs tended to take up all the place in negotiations. If prevention is at all present, then it is the first thing to be dropped. In union circles today, the issue of prevention is widely perceived as not being ‘sexy’. When you ask workers if there is a health-and-safety committee at work, the answer often is: “Yes, but we really don’t see it.” Occupational health and safety, according to the former president of a local union, who admits never to having attached much importance to the matter, is like insurance: “We remember it when we need it,” that is, to repair or compensate for illnesses or injuries that workers have already suffered.

And yet, workplace health and safety comprise a potentially powerful tool for activating the rank and file and strengthening their commitment to the union. It develops the workers’ sense of their human dignity, the sense that we are not salaried slaves, that even at work they remain free citizens. This affirmation of human dignity is at the base of all popular struggles of any significance.

It is also potentially a weapon against the degradation of work, which can be seen everywhere, even in such privileged settings as universities. How long are we going to allow productivity gains to come at the expense of the well-being of workers?

The bill has provoked a certain revival of union mobilization around the issues of occupational health and safety. This awakening should be supported and reinforced. Considering CNÉEST’s inability to apply the law for the past four decades, workers should not passively wait for the results of negotiations in its board of directors, results which are predictable.

We must, therefore, refuse to allow the negotiations to take place behind closed doors within the CNÉEST executive, negotiation that would, at best, produce a “discount consensus.” The shameful omerta that exists in the Consultative Council for Labour and Manpower, another joint union-employer body, is unacceptable for a labour movement worthy of its name. The union representatives of the CNÉEST board of directors must be made to provide regular public reports of the negotiations on prevention rights.

It is also necessary to strictly separate the questions of prevention and compensation/repair in these negotiations, since the board of the CNÉEST has been given the power to adopt regulations regarding the criteria for a disease to be assumed occupationally caused and therefore automatically eligible for compensation. As the late Professor Katherine Lippel insisted, separating these negotiations, and negotiating for prevention rights first, is “the only way to avoid the impression that the victims of occupational injuries and illnesses will finance the improvement of the prevention regime.”

Faced with the employers’ veto right and the support they receive from the government, the primary role of these negotiations must be to nurture and encourage workers’ mobilization. That alone will allow us to hope that Quebec’s workers will finally obtain the right to protect their health and well-being at work, as befits all free citizens. •

How U.S. media misrepresent the Wuhan Institute of Virology’s laboratories and safety protocols