r/AntiWork and the Need for Revolutionary Organization 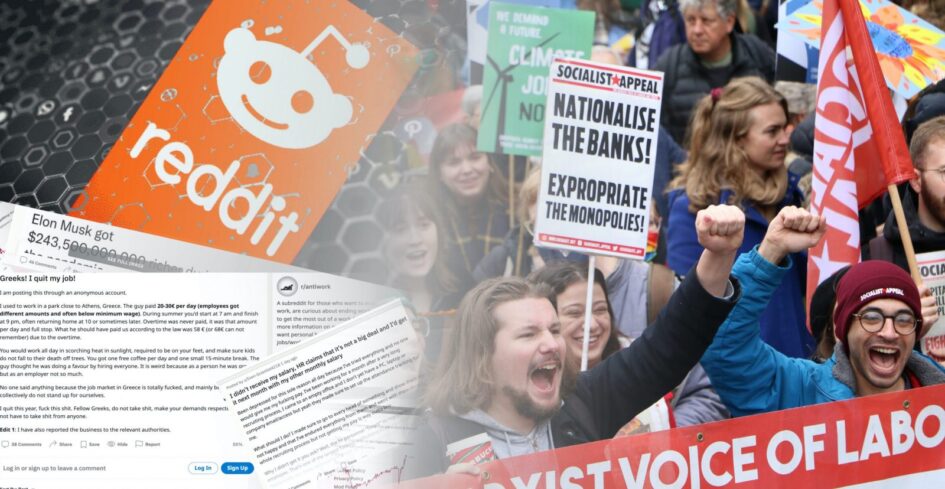 We live in tumultuous times. In the midst of a pandemic, workers are putting their health and lives at risk for peanuts while the bosses rake in record profits. For almost two years, employees have been expected to drone on as loyal worker bees with zero regard for their health. Meanwhile, homelessness and rent, hunger and food prices, natural disasters, and fuel prices continue to rise, and meager wage rises are gobbled up by inflation. Such conditions are volatile and unsustainable.

A poll by Gallup published last September found that support for unionization is at its highest in America since 1965. The following month, “Striketober” swept the country, with roughly 25,000 going on strike. On the other hand, unorganized workers have begun to walk away. 4.5 million workers quit their jobs in November alone. Signs along the lines of “Closed because nobody wants to work” have become commonplace across the country.

All of this represents the beginnings of a significant shift in the consciousness of the working class. Given the cowardly class collaboration of the labor leaders, American workers have for decades been atomized without a space to discuss the quickly changing conditions. But nature abhors a vacuum, and the class struggle demands a platform to express itself. A part of this vacuum is being filled by r/AntiWork, a subforum hosted on the online forum Reddit. Since the beginning of the pandemic, r/AntiWork’s membership has experienced explosive growth, going from 100,000 members in March 2020 to 200,000 by the end of that year to just over 1.7 million in late January of this year.

A recent Fox News interview with a r/AntiWork moderator has the members of the forum up in arms. Not only did the moderator do a shoddy job explaining what r/AntiWork is all about, they claimed to speak on behalf of everyone. Many are now asking if some sort of mechanism needs to exist by which leaders are elected, and top posts are clearly breaking from the idea that “laziness is a virtue,” even if the moderators who first started the group still hold such ideas.

In contrast to media coverage that has largely watered down the content of the forum, the description of r/AntiWork reads, “A subreddit for those who want to end work, are curious about ending work, want to get the most out of a work-free life, want more information on anti-work ideas and want personal help with their own jobs/work-related struggles.”

This juxtaposition has led some to dismiss the subreddit as an online community based on laziness and entitlement. Or perhaps worse, they see it as a group of utopians who don’t want to do any work whatsoever. But while there are indeed more than a few such individuals present, for the most part, the forum is an extremely symptomatic expression of wide scale discontent with capitalist alienation.

Workers post about unnecessarily long hours, and how they spread out their work to last them the eight-hour workday. They post about understaffed workplaces and about bosses, customers, and clients talking down to and mistreating workers. Others post about the insultingly low wages even for highly skilled and experienced workers. Still others explain about how the bosses care more about profit margins than the safety of their workers.

Three of the four most popular posts consist of screenshots of text messages which the posters claim are between themselves and their former employers—former employers, because those screenshots end with the employees sticking it to their bosses and quitting in a blaze of glory.

The fourth top post is the story of an employee who freelanced for a company and was fired for asking for a well-deserved pay raise. Years later, the poster found that the company was still using a Google Drive folder that the poster owned, and so they deleted the folder, costing the company thousands of hours of work!

Those participating in the forum are sympathetic to the attitudes of r/AntiWork not because they want to abolish human productive activity per se, but because of an impulse to abolish the exploitative conditions of wage slavery. Workers instinctively understand that their labor creates everything in society. They only wish to do away with the parasitic capitalist class that alienates them from what they produce.

How do the users suggest achieving their goals?

The forum features many stories about disgruntled underpaid employees realizing their labor is integral to their company, whether there is a shortage of people willing to work those jobs or because they are skilled workers and difficult to replace. The stories invariably end with the poster leaving their original positions to find a job that promises better benefits and pay.

As important as the posts that gain popularity is the advice given by other users about how to handle situations in toxic or hostile work environments. More often than not, the top comments advocate taking measures like reporting offending parties in a company to HR, gathering evidence that employers are breaking labor laws and presenting the evidence to their local labor boards, quitting, or waiting to be fired—all so that the employee can collect unemployment.

This reveals one of the major shortcomings of r/AntiWork: the lack of a class-struggle perspective. The group advocates getting personal revenge on offending companies and bargaining on an individual, rather than a collective basis. Instead of organizing to bring every employee up to the same level, workers are ultimately encouraged to wreck the workplaces our class is to collectively inherit during the socialist revolution. A section of the community believes that such tactics will pressure the bosses to respect workers’ rights and offer better conditions.

It is true that wages rose on average in 2021. But inflation is up a whopping 7%, completely negating these gains for most workers. Even though 4.5 million workers quit their jobs in November alone, the “Great Resignation” hasn’t secured a significantly better quality of life for most.

And even if some individuals are able to improve their situations, what about workers who can’t afford to quit and find another job? Or those who don’t have the skills to give them the individual leverage over their employers? What about undocumented immigrant workers who live in constant fear of deportation? What will happen when the labor market landscape inevitably swings back in favor of the bosses? When productivity drops and living conditions squeeze the working class further, workers will feel pressure to get back to work to survive even more than they do now. Without control over the means of production, workers can be sure that they will pay for the lost profits of the bosses through austerity measures and other cuts.

None of this is to say that the users of r/AntiWork are explicitly against organizing and taking concrete action. Quite the opposite, as the Striketober membership bump also came with posts lending solidarity to striking workers and users going so far as to flood Kellog’s job postings with phony applications to logjam the company’s efforts to find scab workers to permanently replace their 2,500 striking workers.

This was concrete action taken by a group of mostly anonymous users online to aid tangible struggle. On top of that, an offshoot of the community has dubbed itself r/MayDayStrike, whose users, inspired by the content of r/AntiWork, are trying to push users in a class-struggle direction.

In recent days, another subreddit r/WorkReform has emerged, growing from zero to almost half a million members in just two days. One top post, which has 28,000 upvotes reads: “Antiwork was a dumb name anyway. Most people want to work. We just don’t want to be exploited. We want reform. We have the power, never forget that.” The poster goes on to quote Woody Guthrie, who famously sang, “You can’t scare me, I’m stickin’ to the union!” Some political confusion notwithstanding, this is a hugely promising indication of the conclusions many workers across the United States are drawing.

There have also been appeals on these subreddits for members to join the IWW to learn how to organize their workplaces. Although there are many deficiencies with the IWW’s methods, interest in moving from internet forums to workplace organization is yet another sign that the consciousness of the American working class is advancing, and that millions of workers are no longer willing to accept living in the conditions that the capitalist class creates for them.

What should be done?

Despite being an admirable expression of pent-up class anger, what r/AntiWork ultimately lacks is revolutionary theory and organization. The idea that workers can change society simply by quitting and bargaining on an individual basis flows from a lack of understanding of the factors that prop up capital. The blame for this confusion lies not on the Reddit users themselves, but on the labor leaders, who in the most promising circumstances are doing practically nothing to build the labor movement.

The reality of work at companies such as Amazon—which can afford to replace workers like burnt-out light bulbs—demonstrates that the only way forward is organizing on a collective basis. Instead of withholding the replaceable power of individuals, the working class must struggle collectively.

However, we believe that struggle cannot be confined to bread-and-butter economic issues. All history shows that any reforms won under capitalism are limited in scope and duration. In order to truly eradicate wage slavery, we must link these immediate issues to the question of private property of the means of production and the need to overthrow capitalism and establish a workers’ government.

Even if the r/AntiWork milieu could organize a layer of radicalized workers, other workers in mainstream unions would need to be brought along. To fight effectively, the farsighted workers in r/AntiWork should arm themselves with Marxist theory and revolutionary organization to bring these ideas into the broader working class.

Abolishing the conditions of wage slavery will not be achieved by individual resignations or by building a “red union.” It will require a fighting, class-struggle labor movement and a mass socialist party armed with a Marxist program and leadership. This is what the International Marxist Tendency is building, and we appeal to anyone who agrees with this perspective to join us!

What models of organization can guide us now?

The ‘Democratic Majority for Israel’ is a hate organization