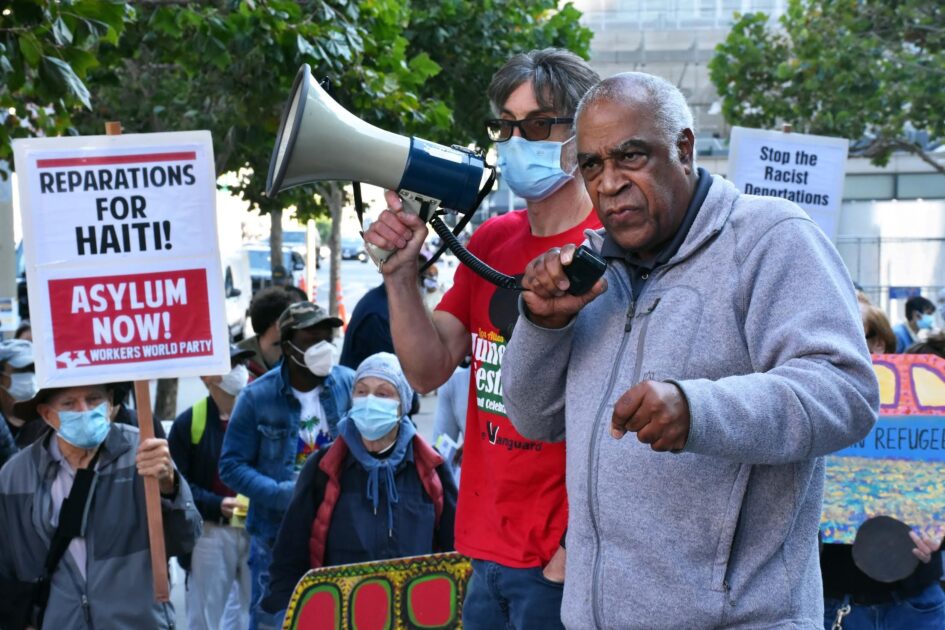 The whole world has responded with horror and anger at images of Haitian migrants being whipped and terrorized by U.S. Border Patrol agents on horseback. Parallels have been drawn with chattel slavery in the Western Hemisphere, which was first ended in Haiti when enslaved Africans carried out a successful revolution. Two demonstrations took place Sept. 21 in New York City, one outside the United Nations in Manhattan. Police limited the number of people who were allowed to protest outside the U.N., forcing the demonstrators to relocate. The second action took place later in the day in Brooklyn.

Nearly 200 people gathered in front of the San Francisco Federal Building during rush hour Sept. 24. The large group then took to the streets chanting “U.S. Out of Haiti — Black Lives Matter!” and marched to the Civic Center. At the rally Pierre Labossiere, co-founder of Haiti Action Committee, the organization sponsoring this demonstration, gave a history of U.S. intervention and the colonization of Haiti. Labossiere said that the Haitians who crossed the river in the U.S. were refugees and must be treated as such. He spoke about the 2004 U.S. coup that overthrew elected President Jean-Bertrand Aristide, ushering in a long period of repression and hardship.

Jeremy Miller of Black Alliance for Peace expressed his group’s solidarity with the Haitian struggle for freedom. Several organizations, including Workers World Party, gave solidarity statements at the closing rally.

Texans support refugees at the border In downtown Houston Sept. 22, people picketed and rallied for three hours at the Mickey Leland Federal Building. They condemned President Joe Biden, the actions of the Border Patrol, and both the Democratic and Republican parties. The action was organized by the National Black United Front.

Traffic constantly responded to two large signs, one reading “Honk to support refugees” and the other, “Honk if you agree.”

The demonstrators were at first mostly African American, and the popular chant was “Let my people in!” As people got off work, the protest became more multinational, with Latinx, Palestinian and white activists joining in.

“The revolutionary people of Haiti won a war and kicked out the French but were then ordered to pay reparations. Now the people of Haiti have had to come to America’s door, and we can’t let our people down. We can’t let our Latino sisters and brothers down either, because the U.S. stole Texas, Arizona, New Mexico and California. And this whole country was taken from Indigenous people,” Minister Abdul Haleem Muhammad of the National of Islam told the crowd.

A large number of Haitians have been allowed into Houston, and community organizations are helping with everything from housing to clothes to diapers. Houston Haitians United has led this effort. The National Black United Front is holding a Haitian Relief Drive and collecting donations of health and safety products.

UNITE HERE, the union representing  “over 300,000 hospitality workers across the U.S. and Canada, including thousands of Haitian housekeepers, servers, cooks and concessions workers” issued a statement Sept. 22, quoting from Rose Denis, President of UNITE HERE Local 355 in South Florida:

“I fled from Haiti to Miami over 17 years ago to escape political persecution. Now, I represent hospitality workers across South Florida, who have been on the front lines working to get our economy running again. Our spirit as Haitians is to fight back. In 1804 we led the largest slave rebellion in the Western Hemisphere against colonial rule. We are resilient, but we cannot do it alone. It’s time for President Biden to step up and defend Haitians by taking immediate action to stop deportations.” (unitehere.org)

“Los Angeles has been ground zero in terms of support for the movement for Black Lives from labor,” Felipe Caceres, a coordinator with SEIU Local 721, said on Sept. 23. “A lot of our members were working hand in glove with BLM on other things, so after seeing these visuals [from the border], the Latino and Black caucus came together and decided that Los Angeles is ground zero for us to show our support for Black and Brown organizations leading the way, not only for a pathway for 11 million undocumented people but also for asylum seekers.”  (lataco.com)

In a Sept. 24 solidarity statement, the 105-million strong World Federation of Trade Unions declared: “We call upon the working class and militant trade unions of Latin America and the Caribbean, as well as the ones of the U.S., to struggle for the rights and protection of Haitian workers, of migrant workers in every country of the Americas. To fight against racism and the causes that create migrants and refugees, which are none other than poverty, imperialist wars and exploitation.” In Philadelphia about 75 people surrounded a huge “Libertad” banner laid on the ground Sept. 25 before Independence Hall near the Liberty Bell. Speakers demanded President Biden end an Immigration Customs and Enforcement (ICE) prison contract in Berks County, Pa. An artwork of over 1,000 paper flowers, created by visual artist Michelle Angela Ortiz, included messages of freedom for and by immigrant families formerly detained at the Berks County Detention Center.

After years of protests, ICE was forced to end the Family Detention Center, north of Philadelphia. However, ICE now plans to replace it with a prison for women migrants.

The message by the Shut Down Berks Coalition and seven other endorsers was loud and clear: “Immigrants in Pennsylvania are not going to allow families, women or anyone to continue to be incarcerated. We don’t need more prisons — we need more social services!”

Referring to the recent acts of terror at the Del Rio, Texas, border crossing, and the forced deportations of thousands of Haitian people, Steve Paul from Haitian American Voice said: “The U.S. government has a long history of treating Haitian migrants particularly terribly because of the color of our skin and because of where we come from. . . . No more prisons! No more ICE! No more deportations!” He announced a protest against Haitian deportations for Sept. 28 at Philadelphia City Hall.

This event was part of Detention Watch Network’s Communities Not Cages National Day of Action. It occurred during National Migration Week, when demonstrations, organized in solidarity with all migrants and protesting the brutality against Haitian refugees in Texas, were held around the country. Many were sponsored by a broad cross section of community and social justice organizations. Such was the case in Cleveland Sept. 23, when dozens of solidarity activists braved fierce winds to hear representatives from 11 sponsoring organizations representing im/migrant, Latinx, Black, Asian and Indigenous communities. Speakers condemned the systemic anti-Blackness and the legacy of slavery embodied in the anti-Haitian terror.