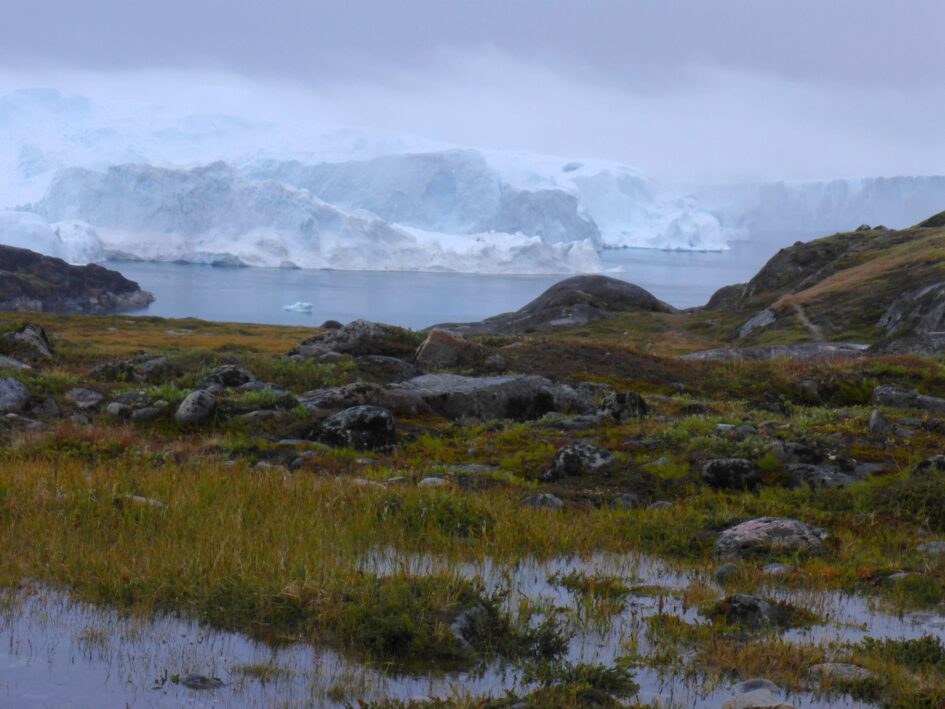 A story that made its way into numerous media toward the end of August concerned rain falling at Summit, the Greenland Environmental Observatory located at the highest point on the Greenland ice sheet. From Aug. 14 to 16, rain fell for several hours — an extraordinary event at this station, 400 miles above the Arctic Circle and at an elevation of more than 10,000 feet. The ice fjord of Ilulissat, which drains calving ice into Baffin Bay, on the west coast of Greenland in 2014.

Ice cores from the Greenland ice sheet give a deep record showing that air temperatures had previously been above freezing only six times over the last 2,000 years. (New York Times, Aug. 20)

Conditions on the Greenland ice sheet greatly contribute to the progression of global climate change. In recent years, significant melting events have taken place on the ice sheet, adding to sea level rise. But more than just a measure of sea level rise is involved.

The massive amounts of meltwater from the ice sheet are fresh, not salt, water. When fresh water flows into the oceans, the water density, temperature and overall salinity are changed. This affects weather, sea life and the amount of carbon dioxide the water absorbs.

The white surface of the ice sheet is affected by melting events, which results in lakes of blue meltwater (glacial water appearing blue due to sediment), rivers of runoff (also appearing dark blue), the formation of darker ice when melted snow refreezes and newly exposed land. The decrease in reflective white surface area, or albedo, results in a feedback loop, so that additional solar heat is absorbed by darker surfaces, which in turn further raises temperatures.

Particularly ominous has been the measurable effect of the additional fresh water on the massive ocean currents flowing around the island of Greenland. These currents greatly influence the weather of the entire Northern Hemisphere. The circulation is called the Atlantic Meridional Overturning Circulation (AMOC), often pictured as a conveyor belt where warm and cold waters are seasonally rotated from the surface to deep parts of the ocean, as the currents move from tropical to high latitudes. This fundamental component of the earth’s climate is being measurably altered by the addition of huge amounts of fresh water.

Weather isn’t the same as climate. Climate scientists agree that the AMOC has measurably slowed, but are unsure on how quickly this will impact weather. Europe has been experiencing colder winters, searing summers and drought, which some scientists attribute to these changes.

The Arctic is experiencing global warming at twice the rate of other latitudes. The effects of such events as extreme warming and rain on the Greenland ice sheet are felt by the country’s Indigenous people, many of whom still depend on harvesting the country’s rich maritime and land resources and live in vulnerable coastal areas.