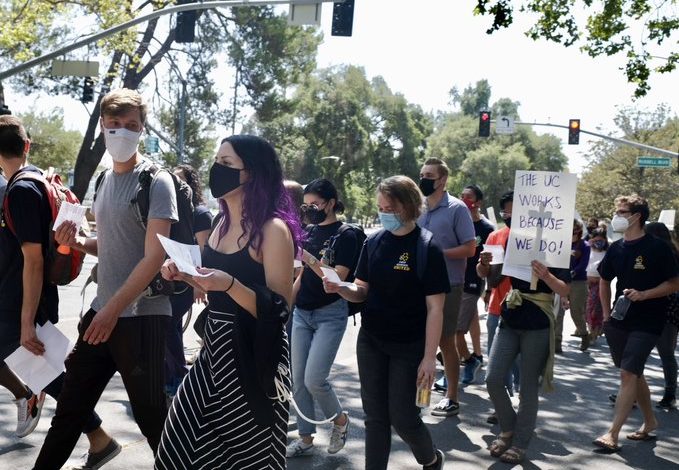 On August 25, over 1,000 student researchers at the University of California rallied and marched in support of their unionization campaign. Their union, Student Researchers United/UAW, represents all 17,000 student researchers across the 10-campus UC system and is the largest group of workers in the United States to form a union in over a decade. After submitting a strong majority of union authorization cards to the state of California in late May, the union is calling on the University to recognize the union and begin bargaining a first contract.

Student researchers (SRs) are essential to the UC’s extensive research program. They conduct experiments in many fields including cancer biology, public health, green energy, computer science, and are a driving force behind UC winning over $5 billion in federal research grants each year. Many SRs have also redirected their research in the last 18 months to focus on fighting the COVID-19 pandemic.

“More than 12,000 of us have decided to form a union because issues like harassment, discrimination, low pay and job insecurity aren’t going away on their own,” said Anh Diep, a union supporter and researcher in the Quantitative & Systems Biology Department at UC Merced. “We are asking UC to recognize our democratic decision to form a union and bargain collectively. We look forward to bargaining a first contract that makes progress for women and non-binary researchers, parents, international researchers and everyone who faces unfair hurdles in their workplaces.”

Following the passage of SB 201, student researchers began a new round of organizing. The onset of the COVID-19 pandemic created numerous challenges but the SRs adapted by creating a dense and broad network of worker-organizers to reach all SRs working across the massive UC system. This organizing model resulted in a supermajority of SRs — over 12,000 to date — signing authorization cards in support of forming a union.

The pandemic also made clear to student researchers why they need a union. As was the case for many workers, COVID-19 led to dramatic changes in working conditions and demonstrated the necessity of collective action. For example, many SRs continued their experiments throughout the pandemic but faced PPE shortages and inadequate health and safety protections. WIthout a union, SRs have little recourse to demand a safe workplace.

Another example is international students — comprising a significant portion of SRs — who faced many challenges during the pandemic such as the attempted “Trump student ban.” This policy would have banned international students from remaining in the United States if they were taking online classes. After a wave of activism led by UAW and other academic unions, the ban was rescinded following several court challenges and many demonstrations across the county.

In early August, the California Public Employment Relations Board certified that a majority of SRs had signed union authorization cards. Under state law, the employer is obligated to recognize the union and begin bargaining. Despite SRs’ overwhelming support for their union, UC administrators are attempting to delay recognition by raising objections – a common tactic that is frequently used by union-busting law firms and employers. The rallies across the UC system served to send a message that SRs are willing to do whatever it takes to win their union.

The student researcher campaign at UC takes place amid a wave of academic worker organizing across the country. If SRs at the University of California can win their fight for union recognition, it will set an important precedent and will inspire other academic workers to take action.