Rally for Palestine in downtown Dallas 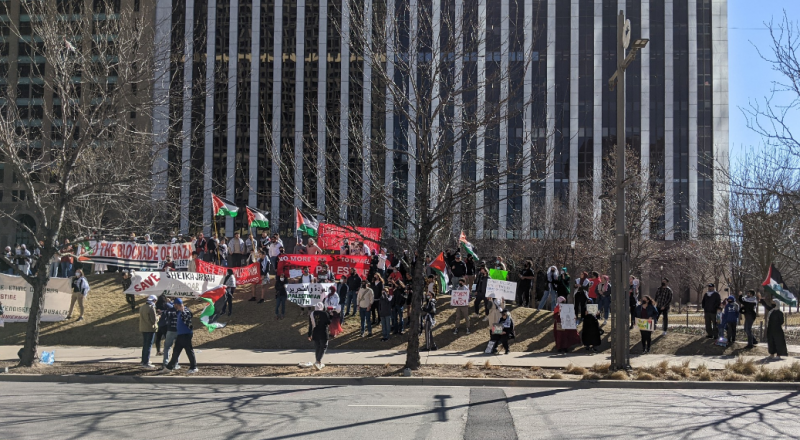 Dallas rally in solidarity with Palestine.
(Fight Back! News/Staff)

Dallas, TX – On January 23, around 100 people showed up at Civic Garden Park in downtown Dallas to protest the continuing eviction of the Palestinian neighborhood of Sheikh Jarrah in East Jerusalem and the continued blockade of Gaza. They also called attention to the “afforestation campaign” by the Jewish National Fund in the Al-Naqab Desert, which is intended to displace Palestinian Bedouin communities living in the region.

The protest was called by the Palestinian Youth Movement and cosponsored by Students for Justice in Palestine at University of Texas at Dallas, American Muslims for Palestine, MAS-PACE Dallas, Dallas Palestine Coalition, Malaya Texas, Dallas Committee for Human Rights in the Philippines, Dallas Anti-War Committee, and the Dallas National Alliance Against Racism and Political Repression.

Protesters chanted, “There is only one solution – intifada revolution!” “From the river to the sea, Palestine will be free!” and “Free, free, free Palestine!”

Josh Rudd of the Dallas Committee for Human Rights in the Philippines started off the speeches by denouncing Philippines President Rodrigo Duterte and urging solidarity with the Palestinian struggle. He demanded an end to arm sales to the Philippines and Israel by American arms dealers such as Lockheed Martin and Raytheon.

Nashwa Bawab of the Palestinian Youth Movement condemned Israel’s demolishing of Palestinians’ homes in Jerusalem and the West Bank to make way for Zionist settlers and Israeli Defense Force training camps. Bawab denounced evictions and the afforestation campaign, declaring, “We must reject Zionist attempts to greenwash the occupation, and we will continue resisting til the land is rightfully ours, and until our people get their right to freedom from the river to the sea.”

A member of Students for Justice in Palestine at University of Texas at Dallas gave a speech condemning evictions in Sheikh Jarrah, and bulldozing of Palestinian land in al-Khalil, and called for an end to U.S. support for the Israeli apartheid state. Moussa ended his speech with a chant by Black Panther Assata Shakur, an avid supporter of the Palestinian struggle: “It is our duty to fight for our freedom. It is our duty to win. We must love each other and support each other. We have nothing to lose but our chains.”

International Seminar on Palestine held in Dhaka on 3rd December