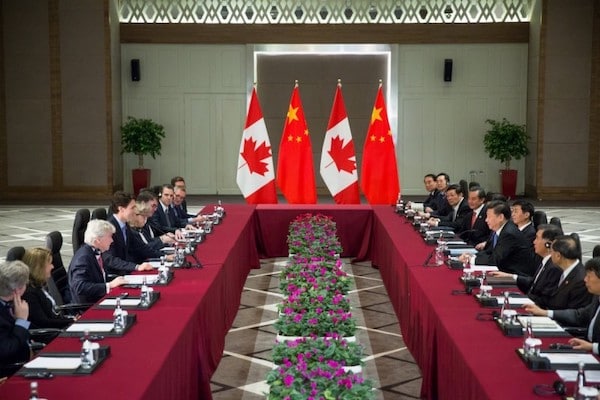 Following the recent federal election, right-wing pundits have sounded the alarm about a conspiracy of “foreign influence” behind Chinese-Canadians switching their vote from the Conservatives to the Liberals.

Meanwhile, most of the mainstream media is engaging in ‘Team Canada’ jingoism over the return of Michael Spavor and Michael Kovrig in exchange for Huawei’s Financial Chief Meng Wanzhou.

It almost feels like militaristic propaganda against a wartime enemy.

Conservative organizer Karamveer Lalh suggested that more than ten seats may have been lost to the Conservatives due to Chinese-language efforts by pro-Beijing groups.

CPC gains in the provinces of ON and BC didn’t translate into seats into the GTA and GVR.

To investigate this, I sliced the electoral map against some demographic values. Two values jumped out at me: visible minorities (generally) and ethnic Chinese. #elxn44 #cdnpoli

A front-page National Post article even framed Chinese-Canadians rejecting the Conservatives as evidence of apparent election interference by the Chinese Communist Party.

“China Sabotaged my Campaign: ex-MP” read the paper’s lead headline on Thursday, September 23 (the story was also the top item in the paper’s insert in Postmedia dailies across the country). The conspiratorial article asserts that China intervened through its ambassador, media organizations and WeChat, a Chinese instant messaging application, to swing votes in numerous ridings.

The story grumbled about an interview China’s Ambassador to Canada Cong Peiwu gave to The Hill Times in August in which he criticized politicians who “hype” or “smear” China, which was presumably a reference to Conservative leader Erin O’Toole who has made attacking China a central plank of his political brand.

While it’s important to be vigilant about foreign interference in domestic affairs—particularly around election time—Cong’s statement was a much less direct intervention than U.S. Senator Bernie Sanders’ endorsement of NDP leader Jagmeet Singh or the public backing of Justin Trudeau and the Liberals by former U.S. President Barack Obama and U.S. Secretary of State Hillary Clinton.

The article also bemoaned anti-Conservative messages circulating on WeChat, a platform with more than one billion active users. “They have chat rooms and chat groups dedicated to unseating Kenny Chiu,” claimed the defeated Conservative incumbent in Steveston—Richmond East.

In other words, Chinese-Canadians set up social media forums to communicate their displeasure with the Conservatives and an MP who introduced a bill to establish a “Foreign Influence Registry”—which would effectively target members of that ethnic group.

This is usually called constituents organizing to make their voices heard but the story made it appear sinister, noting that the vote “raised the question of whether proxies for the People’s Republic government managed to influence the election—just as security agencies and other watchdogs have warned could happen.”

With little evidence, the National Post suggested that tens of thousands of ethnically Chinese voters acted as “proxies” for the Chinese government.

The McCarthyite tone of the article confirms why many Chinese-Canadians might be hostile to the Cold War-style politics pushed by the Conservatives (enabled in part by the Liberals, Greens and NDP). The xenophobia promoted by such propaganda should be opposed by all progressive Canadians.

Following its publication, the National Post article sparked a wave of commentary.

A Toronto Sun story asked, “Is it possible that Beijing used agents in Canada to ensure their result and silence critics?” Another National Post op-ed by conservative commentator Adam Zivo claimed the vote “highlighted an emerging problem that all Canadians should be worrying about: China’s interference into Canada’s domestic politics.”

While right-wing outlets labelled Chinese-Canadians voting against the Conservatives as a Beijing plot, the rest of Canada’s media sphere uncritically celebrated the prisoner exchange to obtain the freedom of Michael Kovrig and Michael Spavor.

In the Journal de Montréal, Richard Martineau called China a “bandit regime” while CBC invited former Justice Minister Irwin Cotler to remark on China’s runaway authoritarianism and disrespect for the rule of law.

However, no major media organization attempted to place the prisoner exchange in its real-world context.

Canada should never have instigated the hostage diplomacy by detaining Meng for extradition to the U.S. The case against her was based on Washington granting itself the right to prosecute an alleged crime committed between a China-based company, Huawei, and HSBC, a non-U.S. based bank.

By detaining Meng, Canada legitimated Washington’s bid to extend its legal authority over other sovereign jurisdictions and enforce its sanctions against Iran.

Between the time the U.S. judicial system sought Meng’s detention and the point at which the Trump administration requested Ottawa detain her, Meng had travelled to six countries with U.S. extradition treaties. Only Canada was willing to arrest Meng.

Shortly after her arrest Trump said he viewed Meng as a bargaining chip in his trade war with China. After that point the detention became criminally untenable, as it was no longer plausible to argue the arrest was not part of the U.S.’s bid to weaken multinational tech giant Huawei, the “Crown Jewel of China Inc.”

The media frenzy is bolstered by the Biden administration’s recent doubling down on its anti-China campaign with the trilateral AUKUS security partnership between the U.S., UK and Australia, which will enable the latter to possess nuclear-powered submarines for the first time. This may violate its commitments under the Nuclear Non-Proliferation Treaty as well as the South Pacific Nuclear-Free Zone Treaty.

AUKUS will undoubtedly increase tensions between nuclear-armed states. The accord also undercuts the international cooperation required to mitigate the pandemic and the climate crisis.

Is it really in Canada’s self-interest to unquestioningly side with a decaying U.S. empire whose government is controlled by a rich and powerful oligarchy? A government that Washington Post columnist Robert Kagan predicts will once again be led by Donald Trump in 2024?

Hopefully, the recent hostage exchange and trend of Chinese-Canadians rejecting the Conservatives aggressive policies will embolden those within the Canadian government who prefer engagement over conflict with the world’s emerging superpower.

One would also hope that thoughtful citizens will see through the reactionary anti-China propaganda and come to understand this country’s self-interest lies with an independent, peaceful, and internationalist foreign policy.

150 Years of Canadian Colonization: And Our Right to Self-Determination