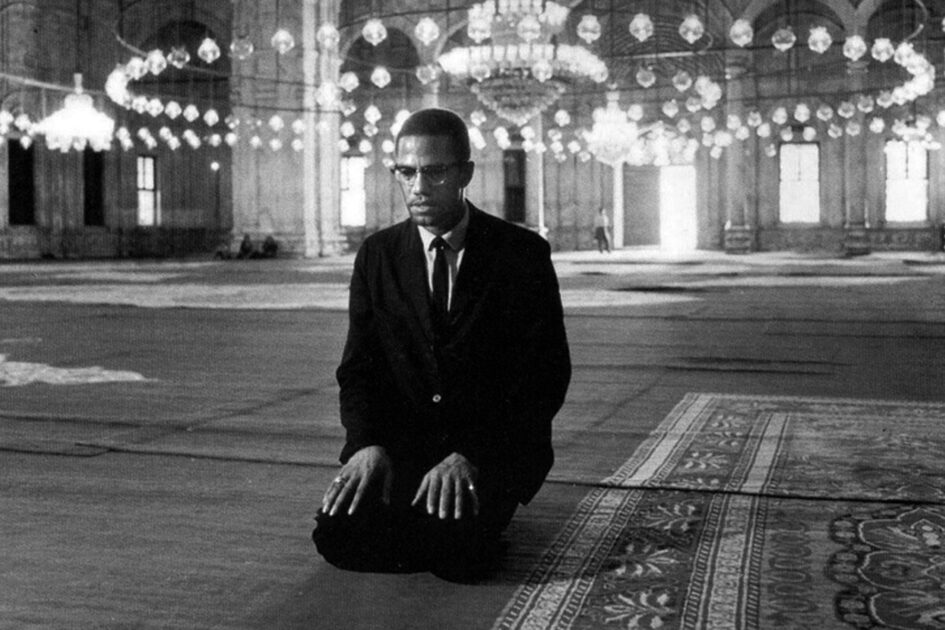 Mohammed Reza Hakimi – a renowned Iranian scholar who passed away in August 2021 – once wrote a letter to Fidel Castro entitled “The Sun of Justice”. Elaborating on the characteristics of a “Quranic society”, Hakimi declared:

“The Quran wants people to ignite the fire of revolutions, fight against corrupt and oppressive rulers in order to save the deprived, and rise up whenever there is a need for rebellion…The Quran says that wealth should not be in the hands of only a few, but rather it should be in circulation among all the people (as blood in the vessels of the body of society). The Quran considers the path for reaching virtue (upright thought and action) to be the unsparing implementation of justice…The Quran wants that property should not rotate among the capitalists but it should be available for everyone. People should blot out high splurge and prodigal aristocratic lives so that the deprived people could attain opportunity to achieve their violated rights.”

A Religion of Rebellion

The Islam championed by Hakimi is the one that belongs to the toilers; it has its historical roots in the life of Prophet Muhammad. Muhammad had made clear to his followers that they should regard him not as a maker of miracles but a human being: he was a Messenger of God, not the son of Allah, and not in direct communication with him; he mainly had aural visions, hearing the voice of Gabriel, who dictated the Quran on behalf of Allah. As a simple messenger, Muhammad spearheaded a revolutionary religion, challenging the dominance of the ruling clans of Mecca.

In the words of the left-wing French Jewish intellectual Maxime Rodinson: “Muhammad…reacted to novel ideas with an open mind. He was to identify himself with the victims of society and make their suffering his own; and he rounded on the men of the existing establishment to call them to account and break down the ideology which served as the justification for their position.” He excelled as prophet, military general and civic leader, translating abstract Quranic teachings into historical concreteness. His lifelong endeavor was to create the material conditions that were worthy of the divine’s dearest creation: humankind.

The combination of practice and theory – exemplified by Muhammad – gave an intensely activist orientation to Islam. What the Prophet had come to establish was not just a religious community but an Islamic historical bloc in constant motion towards progress and social justice. The Prophet’s intention was to establish not just a monotheistic religion but a nizam-e tawhid (unitary society) that would be cemented by united economic, political, intellectual and moral objectives. Equality and freedom were not just meant to be inscribed on scholarly scriptures; they had to be realized in this world through determined struggle.

Hence, what characterizes a true Muslim is not subjective faith in God, the soul and the afterlife, but rather an undaunted will to take effective action for the truth. Muhammad once said, “If one of you sees an abhorrent action, let him correct it with his hand; if he cannot, let him do it in words; if he cannot, let him do it in his heart – which is the weakest degree of faith.” Islam’s emphasis on radical praxis flows from its inherently totalizing dimension. Michel Foucault – a French philosopher – notes, “Islam is not simply a religion, but an entire way of life, an adherence to a history and a civilization”.

The comprehensiveness of Islam – its totalization of the material reality towards a specific vision – was captured by Ali Shariati in his notion of tawhid. In “On the Sociology of Islam”, he states: “tawhid as a world-view in the sense I intend in my theory means regarding the whole universe as a unity, instead of dividing it into this world and the hereafter, the natural and the supernatural, substance and meaning, spirit and body. It means regarding the whole of existence as a single form, a single living and conscious organism, possessing will, intelligence, feeling and purpose”.

Since tawhid is a site of tense unities, the human is a contradictory being who has the dual essence of dust and God, biological and spiritual existence. Insofar that the individual manifests God’s absolute will, he has an active role in implementing God’s value of justice, through human action in the present. Shariati writes: “Didn’t God blow his spirit into man and give him his trust? Hence, man is God’s vicegerent on earth and man derives his will from the will of God…Man has the ability to act like God. He is similar to God although he does not have the level of his power…As a result, the meaning of participation or the significance of the connection between God and man is in man’s ability to choose”.

He further explains this capacity to choose: “[as vicegerent, the human being] has accepted the heavy Trust of God, and for this very reason, he is a responsible and committed being, with the free exercise of his will. He does not perceive his perfection as lying in the creation of a private relationship with God, to the exclusion of men; it is rather in the struggle for the perfection of the human race, in enduring hardship, hunger, deprivation and torment for the sake of the liberty, livelihood and well-being of men, in the furnace of intellectual and social struggle, that he attains piety, perfection and closeness to God.”

As the possession of choice confers upon humans an earthly responsibility to transcend their state of dust towards union with God, politics becomes an integral component of Islam. The oppressed people – to paraphrase Karl Marx – are nothing but must become everything; the condition of subjugation has to be negated so that the working class can become full-fledged humans, the vicegerents of God on earth. Foucault remarked that in this Islamic discourse, “political life would not be, as always, the obstacle to spirituality, but rather its receptacle, its opportunity, its ferment”.

He witnessed the coalescence of these explosive dynamics during the Iranian revolution when political life had become a repository for the spiritual lifeblood, with both elements existing in a symbiosis driven by the tenacity of a mutinous people. In an article for “Le Monde”, Foucault commented: “They [Iranians] inscribed, on the borders of heaven and earth, in a dream-history that was as religious as it was political, all their hunger, their humiliation, their hatred of the regime, and their will to bring it down”.

One thing is evident: To be Muslim is to revolt against injustices. In the Third World, Islam’s militancy has offered a powerful tactical power for mobilizing the masses against colonialism-imperialism and forging a counter-hegemonic cultural identity. Mirsaid Sultan-Galiev, a Tatar Bolshevik revolutionary, asserts that “among the ‘great religions’ of the world, [Islam] is the youngest, thus the most enduring and strongest in terms of the influence it exerts.” He points out that Islamic law contains some “positive” prescriptions such as the “mandatory nature of education…the obligation to work and trade,” and “the absence of private property rights to lands, waters and forests.”

Islam’s uniqueness lies in the fact that “during the last century, the whole Muslim world has been exploited by Western Europe’s imperialism.” Islam was and is still “an oppressed religion forced to be on the defensive.” Such permanent repression has engendered a deep “feeling of solidarity” among Muslims, giving rise to a potent desire for liberation. According to Sultan-Galiev, communists should not strive to eliminate Islam, but rather work at its “Marxization.”

Sukarno, the first president of Indonesia, serving from 1945 to 1967, held similar views. In “Nationalism, Islam, and Marxism”, he argues:

“Moslems must never forget that capitalism, the enemy of Marxism, is also the enemy of Islam, since what is called surplus value in Marxist doctrine is essentially the same as usury from the Islamic viewpoint…The “fanatical” Moslem, who is hostile to the Marxist movement, is a Moslem who does not know what his own religion forbids. Such a Moslem does not understand that true Islam, like Marxism, forbids the capitalistic hoarding of money, forbids the accumulation of wealth for selfish ends…There are many other obligations and tenets of Islam which are identical with the aims and purposes of Marxism. Doesn’t the Islamic obligation to pay tithes, an obligation on the rich to share their wealth with the poor, essentially correspond to the sharing of wealth required by Marxism – of course, to be carried out in the Marxist fashion?”

Sukarno concludes thus, “As for those Moslems who refuse to unite [with Marxists] and who believe that their attitude is right, alas, I only hope they can justify it before God!” To Marxists, he insists that Islam – a “religion of the enslaved” – will “create attitudes which are not reactionary, and will…generate a struggle which in several respects is identical with the struggle of the Marxists.” In a letter to Shariati, Frantz Fanon – a major political philosopher from the French colony of Martinique – observes:

“Islam has fought against the west and colonialism more than all Asia and all Africa. These two old enemies have inflicted serious wounds on its body and soul. And it bears alone the hatred of these enemies, which have struck it more frightfully than they have others…I would like to emphasize, more than you do yourself, your remark that Islam harbours, more than any other social powers of ideological alternatives in the third world…both an anti-colonialist capacity and an anti-western character…I hope that your authentic intellectuals may make good use of the immense cultural and social resources harboured in Muslim societies and minds, with the aim of emancipation and the founding of another humanity and another civilization, and breathe this spirit into the weary body of the Muslim orient.”

In the contemporary world, Islam – instead of being a force for emancipation – is being grotesquely jihadized into a violent form of extremism. This is a natural result of the social logic of imperialist capitalism which turns religion into a mode of illusory satisfaction for the subalterns. Islam has been deformed by the present-day social structure of accumulation into an ahistorical entity of fatalism, disconnected from the real movements of social struggles and only serving as a false shelter from the exploitative turmoil of life. We need to re-root Islam in the contradictions of materiality so that it no longer exists as a broken series of religion abstractions but as a richly textured totality embedded in processes of change.