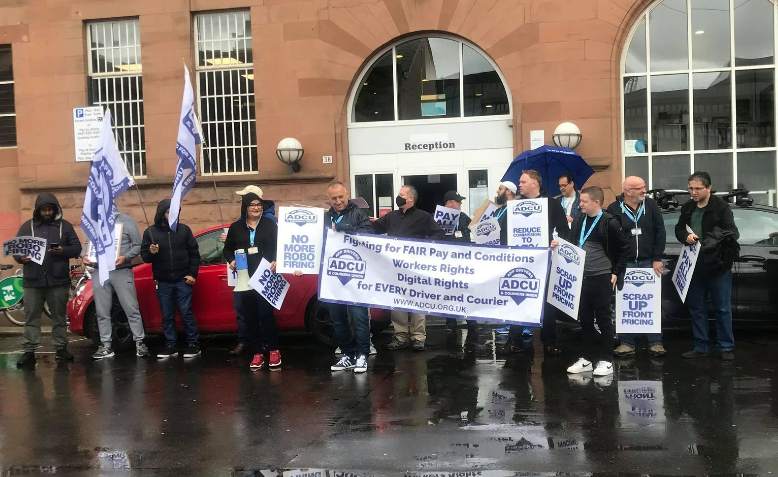 Across the big cities, the 24-hour Uber drivers strike was solid, with solidarity from other unions, while the Uber boss was feted by the Labour leadership

As the red carpet was rolled out for Uber boss, Jamie Heywood, at the Labour Party conference in Brighton, the ADCU rolled out the pickets and protests for a 24-hour national strike on Tuesday this week.

The strike revolves around three essential demands. Firstly, scrap fixed pricing and increase the mileage rate, to a £2 per-mile base fee, combined with a drop in the commission rate from 25% to 15%. Secondly, end unfair dismissals (Robo-firings) and ensure that Uber complies with the UK Supreme Court ruling (which classed Uber drivers as workers and not self-employed). Thirdly, pay drivers for their true working time from log-on to log-off, and not from dispatch to drop, which means Uber drivers remain unpaid for waiting time, which makes up 40% of total working time.

London driver Hassan was furious: “This has been going on too long. We’ve fought for this over years; Uber comes in, cuts fares and we get screwed.” Another explained: “I didn’t go out and spend £30,000 on a new electric car to earn less than the minimum wage.”

ADCU General Secretary warned: “We can’t wait for some white horse – it isn’t coming. The government has no interest in enforcing the law. Uber won’t obey the law. We have to rely on our own power – we have no option but to strike.”

As for the Labour Party, the ADCU wrote to Keir Starmer:

“As thousands of Uber drivers get ready for a 24-hour national strike against Uber on Tuesday, it is completely inappropriate for Uber to be present at the conference. More concerning is the decision of Yvette Cooper and Stephen Timms to share a platform with Uber at Fabian fringe events on the subject of the gig economy.”

ADCU President Yaseen Aslam was dumbfounded: “This is shocking, is the Labour Party really a party for workers?”

The ADCU van advertising the strike made haste down the M23 to Brighton. On arrival at the Labour Party conference that purported to offer ‘a new deal for workers’, many MPs and delegates were stunned to learn of the Uber boss’s invitation.

Delegates expressed “deep embarrassment” that Labour could offer a platform to a “Tax and VAT avoiding business”. One delegate said: “Offering a platform to a scab just goes to show that Keith’s talk of standing up for workers is pure BS.”

Apsana Begum MP offered her solidarity demanding that: “Uber must implement Supreme Court rulings and give workers their due pay and rights,” while Richard Burgon MP said on Twitter: “It was good to see Uber drivers from ADCU outside Labour conference yesterday, increasing awareness about their situation and their campaign. Solidarity with their action in Leeds and across the country. I back the #UberStrike.”

Jeremy Corbyn came out in full support for the strike adding: “Through action and solidarity we can change the world, so workers and their rights are respected.”

Uber-driver Mehmet was integral to organising the London strike and protest. He explained:

“I spoke to a friend the other day who said in 2005, he was getting £1.75 a mile. Now with Uber we’re getting £1.25. In those fifteen years the cost of living, everything, has doubled up or more. They’re asking us to buy cars costing £40-50k now. How do you survive? We need change. We need to shake this industry up.”

Mehmet’s right. We need to shake things up – across the board. Solidarity is key. As trade unionists from Unite, Aslef and other unions joined striking ADCU drivers, the ADCU sent solidarity greetings to UCU members on strike across ten FE colleges on the day.

Around thirty striking uber drivers and supporters gathered in the rain outside Uber’s computer and software offices in Glasgow this afternoon. The atmosphere was extremely lively with two bagpipers providing the background music for the chants of “no more robo-firing!” This refers to Uber’s method of chucking workers off from the computer system, effectively firing them without any human interaction or time to seek representation from their union reps.

One striking worker also commented on their treatment during the pandemic:

“Uber gave no support for any of the drivers through lockdown, so guys are in arrears with their mortgages, guys are struggling financially, and they’ve come back to work and the conditions are worse than ever. We’re asking them to comply with the Supreme Court ruling and we’re asking them just to be fair to the drivers because the drivers have been there for uber – that’s all we’re asking for.”

Despite the weather, morale was clearly high on the picket line: the points of dispute were readily listed off by each demonstrator. This was evidence enough that these workers would hold uber to account and refuse to put up with further callous treatment from the company their labour kept in business over the pandemic.

In Manchester, a number of drivers and supporters gathered outside the Uber Greenlight Hub on Devonshire Street to push for their demands to be met.

Members of other trade unions including the RMT and Unite were present and spoke on the need for other drivers to follow the lead of those present in joining the ADCU.

Drivers spoke of how unfairly they are treated by Uber’s complaints system and how they never receive an apology when Uber retracts charges against them.