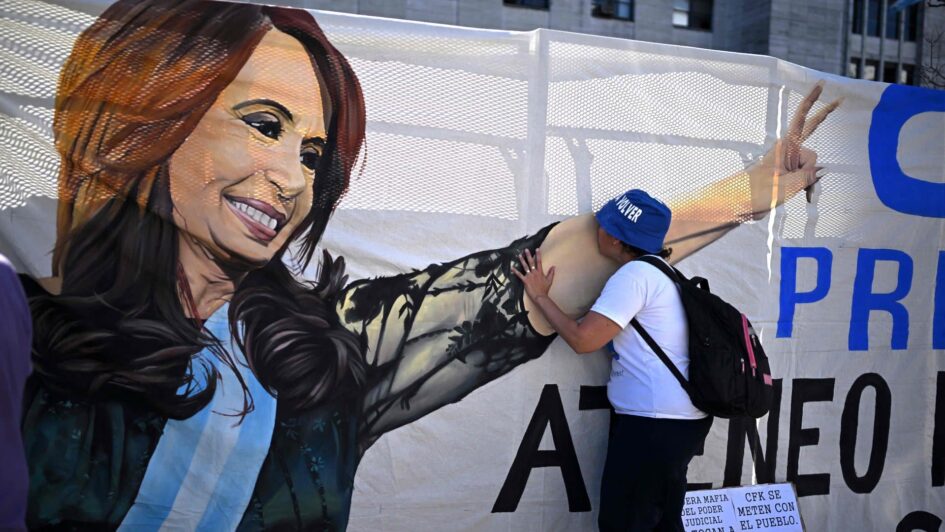 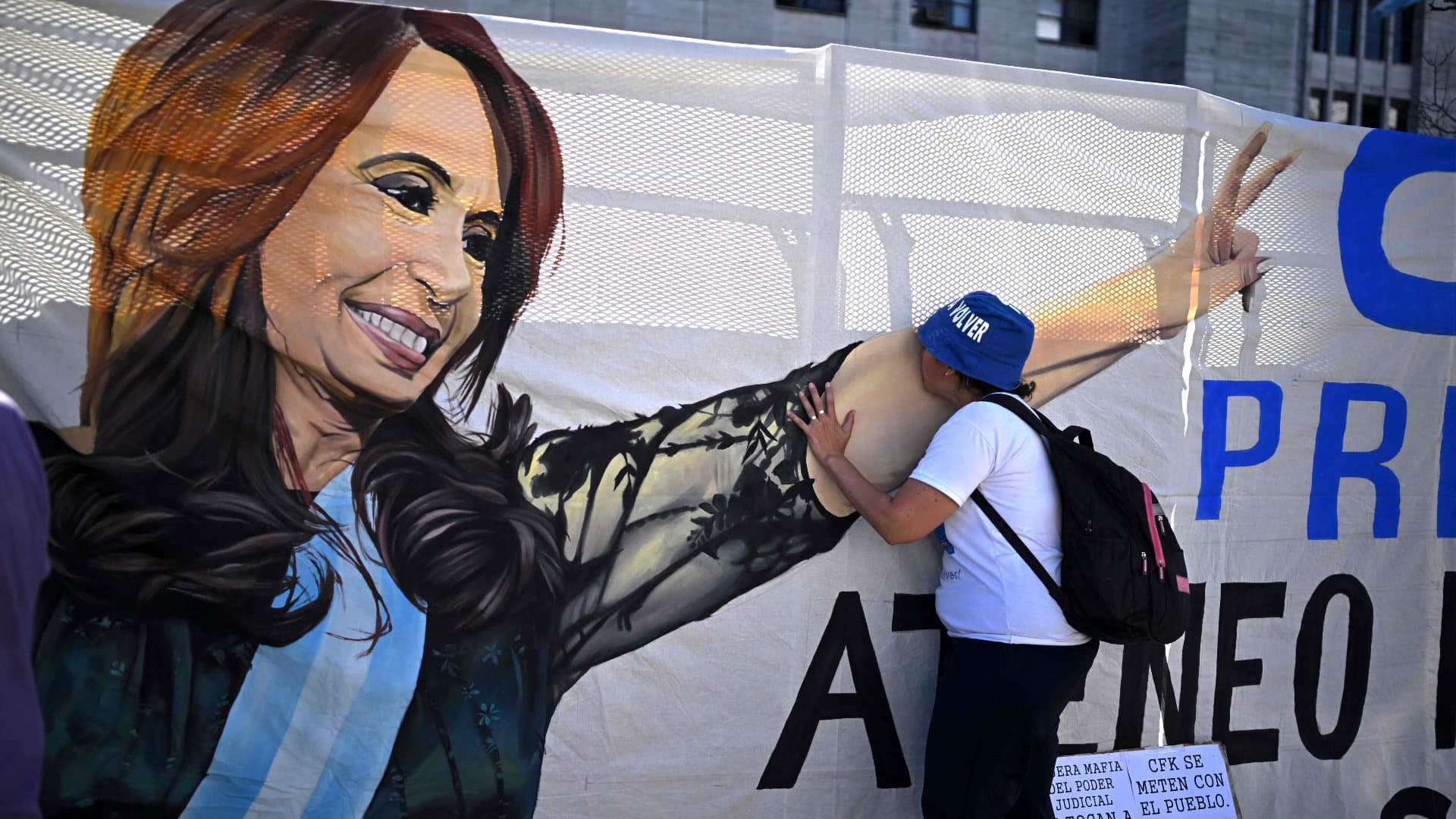 Above Photo: A supporter of Cristina Fernández de Kirchner kisses a banner of the vice-president hung outside the courthouse in Buenos Aires on Tuesday, December 6, 2022. (AFP / Getty Images).

This Wednesday, December 7, Latin American leaders rejected the judicial and media persecution against the vice president of Argentina, Cristina Fernández de Kirchner, that prevent her from participating in the elections and prevent Peronism from remaining in power.

The expressions of support Fernández de Kirchner received, after her conviction for the alleged crime of corruption, were joined by expressions of solidarity sent by the president-elect of Brazil, Luiz Inácio Lula da Silva, as well as the presidents of Mexico, Andrés Manuel López Obrador; Venezuela, Nicolás Maduro; Bolivia, Luis Arce; and Cuba, Miguel Díaz-Canel, in addition to the former president of Bolivia, Evo Morales.

“My solidarity with the vice president of Argentina, Cristina Fernández,” Lula, a victim of legal persecution himself, wrote on his social media account. “I saw her statement that she is a victim of lawfare and we know well here in Brazil how much damage this practice can cause to democracy.”

The president-elect of Brazil, who will be sworn in on January 1, 2023, added: “I support impartial and independent justice for all and for the Argentinian people.”

During his daily press conference, the president of Mexico, Andres Manuel López Obrador (AMLO), described the event as political revenge and anti-democratic action, since conservatism is trying to prevent Fernández de Kirchner from participating in upcoming elections.

He compared what is happening to Fernández de Kirchner with the lawfare against Lula in Brazil, perpetrated through the Lava Jato operation, which he considers a political affair organized by a right wing that exercises great control over Argentinian institutions.

AMLO concurred with the reasoning of the Argentinian president, Alberto Fernández, about how this legal action against Fernández de Kirchner is a setup without legal grounds, and stated that the court that sentenced the Argentinian leader is run by the oligarchy.

AMLO also highlighted Fernández de Kirchner’s honesty and dignity by renouncing her candidacy, and recognized that with her work as vice president until December 2023, she will contribute to Peronism remaining in power and ensure that the truly corrupt will not return, such as those who bankrupted the Argentinian economy and indebted the country with the complicity of the International Monetary Fund (IMF) and the United States.

AMLO recalled that former Argentinian President Mauricio Macri and others responsible for the millions of dollars worth of debt that Argentina has today with the IMF, taken to favor the Juntos por el Cambio [Together For Change] party electorally and, with their backs to the people and Congress, have not yet rendered accounts before any court, as Fernández de Kirchner had stated during her defense in the case.

The Venezuelan president, Nicolás Maduro, also wrote on his social media account regarding the controversial decision against Fernández de Kirchner. “From Venezuela,” he wrote, “we express our firm rejection of the permanent media and political persecution to which Vice President Fernández de Kirchner has been subjected. Sooner rather than later the truth will prevail and the voice of the Argentinian people will be respected. All with Cristina.”

President Díaz-Canel of Cuba reiterated these messages, rejecting the politically motivated legal proceedings against Fernández de Kirchner and reaffirming his support for the Argentinian vice president against the media and judiciary harassment towards her.

“From Bolivia, our solidarity with sister Cristina Fernández de Kirchner, who is sought to be banned from political life with an unjust sentence,” wrote Bolivian president, Luis Arce. “We are sure that the truth will prevail over any attack against the dignity of the peoples and democracy in our Patria Grande.”

Another relevant regional leader, former president of Bolivia, Evo Morales, joined the voices questioning the attempted lawfare against the Argentinian democracy. “Our most vehement repudiation and condemnation of the judicial and rigged coup that tries to truncate the political rights of our sister Cristina Fernández de Kirchner,” he wrote. “After failing in their attempt to assassinate her, today they are trying to eliminate her politically. Strength, sister Cristina. The fight continues!”

The Argentinian Federal Oral Court No. 2, responsible for the ruling, is made up of judges Jorge Gorini, Rodrigo Giménez, and Andrés Basso. After a trial riddled with irregularities that lasted three and a half years, Fernández de Kirchner was sentenced, alongside 12 other defendants, under the alleged “crime of fraudulent administration to the detriment of the public administration.” She was sentenced to six years in prison, and prevented for life from holding public office in her country. The ruling does not take effect until all opportunities for appeal have been exhausted.

What is behind the attempted murder of vice-president Cristina Kirchner?

Finland: Left Alliance and Most of the Other Government Parties Won in the First Regional County Elections

Regional inequality and the Tories: No ‘levelling up’ for the working class